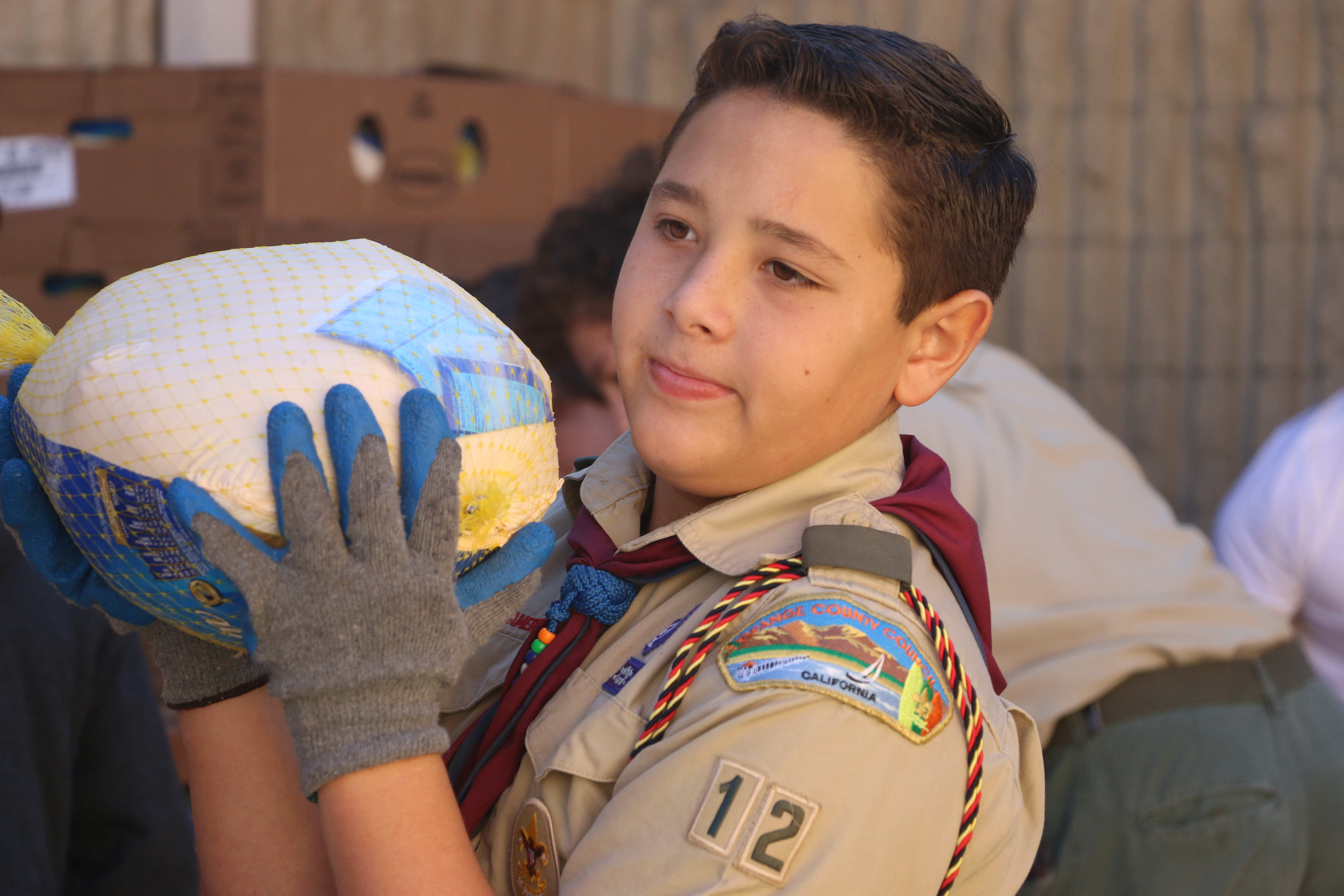 Serving Those Who Serve: South Orange County Gives to U.S. Military on Thanksgiving

Thanksgiving reaches far beyond just the turkey and fixings; it truly is a time to give thanks and show your friends and family that you appreciate them. For so many men and women in our military who are deployed overseas, this time with their loved ones is an impossibility. Not only does this leave these men and women without their families, but it leaves these families without their heroic loved ones. Nothing will remedy these empty seats at the dinner table, but there are ways to help bring a sense of community and support to these men, women and families as Thanksgiving is quickly approaching.

About eight years ago in Dana Point, Damian Collins, owner of Stillwater Spirits and Sounds as well as Waterman’s Harbor restaurant, started hosting a Thanksgiving dinner for a few military men whom he noticed didn’t have a place to go during the holiday season.

“There was a group of regulars I knew at [Sunsets Bar & Grill] that had just gotten back from deployment. They didn’t have a place to go for Thanksgiving, so I decided to start a tradition of hosting dinner for these men and women,” Collins said. “Once the tradition started to grow, we ended up moving to Mahe, then Stillwater, and now Waterman’s Harbor.”

Terry Rifkin, president of the Dana Point 5th Marines Regiment Support Group, teamed up with Collins to not only raise money for a Thanksgiving dinner for Marines, but also for their families.

“Not everyone gets to celebrate Thanksgiving seated at a beautifully decorated table, laden down with homemade dishes. The Collins family wanted to make it special for our brave defenders who could not go home for the holiday,” Rifkin said.

One of the families that has been directly impacted by this tradition is the Kassner family. Col. Ken Kassner is a commander of the 5th Marines Regiment, while also commanding an air-and-ground task force. Wearing as many different military hats as Kassner does, you could imagine his availability around the holiday season isn’t always guaranteed. Currently, Col. Kassner is deployed and serving multiple operations in Iraq.

Lisa Kassner, Ken’s wife and a mother of four boys, said the event is important, especially around the holidays.

“We attended last year as well, and it was wonderful to see Dana Point embrace Marine families and offer them a family holiday experience.” Lisa said, “It’s nice to enjoy the fellowship [with other Marines and families], especially when you are able to engage with your family instead of being stuck in the kitchen all day.”

In essence, this event is designed to keep morale up between Marines and their families during this family-oriented holiday. Eating and celebrating with people in similar situations offers a sense of community and family to people who aren’t able to connect with their relatives.

“That is what Thanksgiving is all about. We are here to say thank you and act as an extended family for these men and women,” Collins said.

Thanksgiving dinner will kick off at 12:30 p.m. right after Turkey Trot concludes on Nov. 24. Marines and families will be greeted at Waterman’s Harbor by the 5th Marine Regiment Support Group and Collins. Dinner begins at 1:30 p.m. after a prayer and some words from Col. Rafael Candelario.

“We are looking for donations from individuals, who would like to sponsor a Marine, or a Marine and his family for dinner for just $35. This is a simple way for our patriotic citizens to show gratitude for the many sacrifices of our Marines and their families and can turn what could otherwise be a lonely day into a ‘family affair.’”

Neighboring cities San Clemente and San Juan Capistrano are also pitching in to serve the military on Thanksgiving.

San Clemente Military Family Outreach (SCMFO) is putting on its 10th annual Thanksgiving Turkey Dinner Giveaway on Nov. 21 at the San Onofre Commissary. Member Courtney Sturniolo is helping put on the giveaway that helps over 800 families a year.

“We set up a booth outside of the commissary, where we buy over 800 turkeys. Usually the event is over in a few hours; it goes by very quickly,” Sturniolo said. “It’s not just turkeys that we give away, we also give out vegetables, pies, gravy… it’s an entire Thanksgiving dinner.”

Sturniolo’s family was stationed at Pendleton while she was growing up, and she said that while Marines are separated from their loved ones, it is up to the community to pitch in and help those who are spending the holiday season alone, just as the community did for her family.

“They do need our help. As a country, we should be taking care of our Marines and thanking them for the sacrifices they make for us,” Sturniolo said.

Additionally, San Clemente will be serving Marines who are unable to even leave base on Thanksgiving.

Carla Hogan, founder of the San Clemente Marine Corps Support Group, assures that Marines will receive much-deserved turkey and stuffing, courtesy of The Fisherman’s Restaurant and Bar. Via a Marine who is permitted to leave base, men and women who are stuck on base will be delivered a free, packed and complete Thanksgiving dinner.

San Juan Capistrano is joining in on the military Thanksgiving festivities, as non-profit organization Homefront America celebrates its 10th annual Giving Thanks to Heroes program.

Unlike your usual food drive, this benefit is run entirely off of donations, due to Mamie’s dedication to quality for local military men and women.

“We didn’t want to be receiving cans of refried beans like at some food drive; I wanted to ensure that these families would be receiving quality food and ingredients for Thanksgiving,” Maywhort said. “These types of programs are prepared for months in advance. We started preparing for this in September and have been making regular runs to the grocery store over the past few weeks.”

Maywhort said because the holiday season gives these family some financial concern, she wanted to be able to alleviate that concern by giving back to those who sacrifice for us all by putting their needs before her and her family’s own.

“We wouldn’t be able to do it without the local community. All of our donations are private donations; we don’t receive any money from corporations or businesses,” Maywhort said.