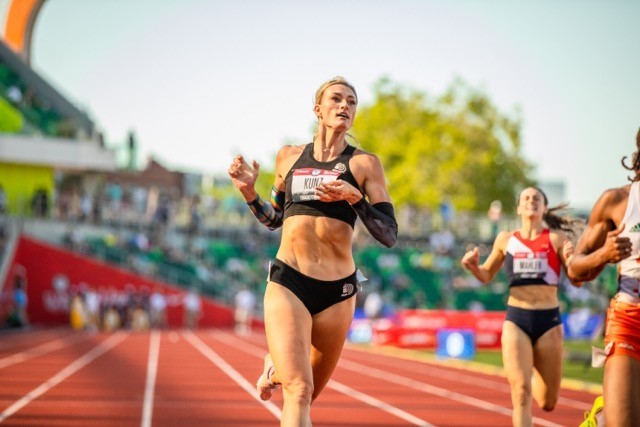 The amount of effort and preparation it takes to become an Olympic athlete is staggering.

Most Olympic hopefuls put all their blood, sweat and tears into just one event for the opportunity of reaching the pinnacle of their sport. Combine all that effort and spread it across seven disciplines to qualify for just one event and throw in the mental hurdles of training for a delayed Olympics through a once-in-a-century pandemic, and it might all seem too much for the average person.

But on June 26-27 in the crucible of a blistering Pacific Northwest heat wave, San Clemente resident Annie Kunz took all of those obstacles and lit her own Olympic flame.

Kunz overcame and held off a talented heptathlon field with four personal-bests in the seven events to win the U.S. Olympic Trial heptathlon in Eugene, Oregon and qualify for the Tokyo Olympics.

On June 26, Kunz, a 28-year-old Colorado native, placed fourth in the 100-meter hurdles at 12.95 seconds and cleared a personal-best mark in the high jump at 5 feet, 11 ¼ inches to place sixth. Kunz jumped from fifth to first in the overall standings with a win in the shot put at 51 feet, 7 ¼ inches and added a personal-best run in the 200-meter sprint at 23.71 seconds for a fifth-place finish in the event.

At the end of the first day, Kunz held a slim lead overall with 4,042 points, ahead of Taliyah Brooks at 3,946 points and 2016 Olympian Kendell Williams at 3,924 points. Brooks withdrew from the competition before the second event on June 27 after fainting while warming up as temperatures on the track reportedly reached 150 degrees. The rising temperatures also forced a three-hour pause in the Sunday events.

Kunz and Williams dueled throughout the final day as Williams opened with a win in the long jump at 22 feet, 1 inch, just ahead of Kunz, who finished second with a personal-best of 21 feet, 4 inches. In the javelin, Kunz slipped down to second overall by a mere two points behind Williams as she placed fifth in the event with a personal-best throw of 147 feet, 10 inches. That throw locked in the Olympic rings for Kunz.

“Javelin is notoriously my weakest event,” Kunz said. “It’s the one I struggle with the most. I set myself up well (through the first five events). I was shooting for 40 meters, and I hit 45 meters. It was a huge PB (personal best). And it was like, ‘Holy crap, I’m going to make the team!’ ”

Kunz knew she was going to Tokyo, but Kunz also knew after the javelin that she had her shot to win right now at the trials. Kunz just needed to beat out Williams in the 800 meters, and with a time of 2 minutes, 15.24 seconds, Kunz finished sixth, while Williams came in eighth. As the final scores hit the board, Kunz won the heptathlon with a personal-best score of 6,703 points and edged out Williams by just 20 points.

“I didn’t even know that score was attainable,” Kunz said. “That’s where the emotion hit me, and I started crying and realized I was an Olympian.”

Kunz’s journey to be an Olympian began in her home state of Colorado, where she was a three-sport athlete. Kunz’s prowess as a soccer player—two-time state champion and four-time Colorado female athlete of the year—landed her a scholarship at Texas A&M. While other schools recruited her, Kunz chose to be an Aggie because of the school’s commitment to allow her to be a dual-sport athlete and continue to compete in track and field.

At Texas A&M, Kunz eventually redshirted ahead of her final college season, when she chose to focus on track and field. Kunz was named an All-American and All-SEC in track and field, and in that 2016 season, Kunz qualified for her first Olympic Trials, where she finished eighth.

Kunz then made her way to Southern California to train at the Olympic Training Center in Chula Vista. Kunz and her then-boyfriend, now-fiancé Tyler Mahon originally settled into Newport Beach as a midway point between his work in Los Angeles and office in Aliso Viejo and her training in San Diego County.

In 2020, thanks to the convincing of some friends and Kunz’s Olympic training on the horizon, the pair found a more comfortable middle spot in San Clemente in May. Kunz stays down in Chula Vista three nights a week in a dorm room as part of the residence program for training athletes, but San Clemente remains their home base. They also are members at Bella Collina San Clemente, a private golf club in their new hometown.

“We just fell in love with the community,” Kunz said. “It’s such a hidden gem that we had no idea about. It’s such a good tight-knit and grounded community.”

While living in San Clemente during those early days of the pandemic, Kunz hit her struggles, training on her own for the first time without a coach and battling rounds of depression. Kunz pushed herself daily and found places to work out, whether it was sneaking hurdles into the then-closed Jim Johnson Memorial Sports Park or running the hill by her house on the other side of Del Mar.

Kunz found that this period of isolated self-motivation was a blessing in disguise for her Olympic journey.

“I learned how much I wanted it with the first time by myself,” Kunz said. “That was my motivating source through COVID. I was going to take this time as the biggest blessing I got. I started seeing a nutritionist and therapist and sports psychologist. None of those things would have happened without COVID.”

Kunz is now just four weeks away from her Olympic experience in Tokyo. However, due to COVID-19 protocols, the Games won’t have the same grandeur that many athletes had hoped to take in. Athletes can only arrive in Japan one week before their competition and must leave the country 48 hours after their final competition, which means a large number of athletes won’t even be in Japan during the opening or closing ceremonies. Athletes also can’t tour the grounds or spectate at other events.

Kunz will compete in the heptathlon on Aug. 4-5, and while the experience might seem lessened to those on the outside, it is still the Olympic Games.

“After a year of no competitions, it really makes you grateful,” Kunz said. “I’m just so grateful that we get an Olympics. It’s not what we expected, but at the end of the day, we’re going to get an Olympics. I’m looking forward to being with the best in the world and competing for a medal. It’s just so rare for anyone to experience in their lifetime.”

Kunz has her sights set on the podium with a shown ability to run faster, jump higher and throw stronger.