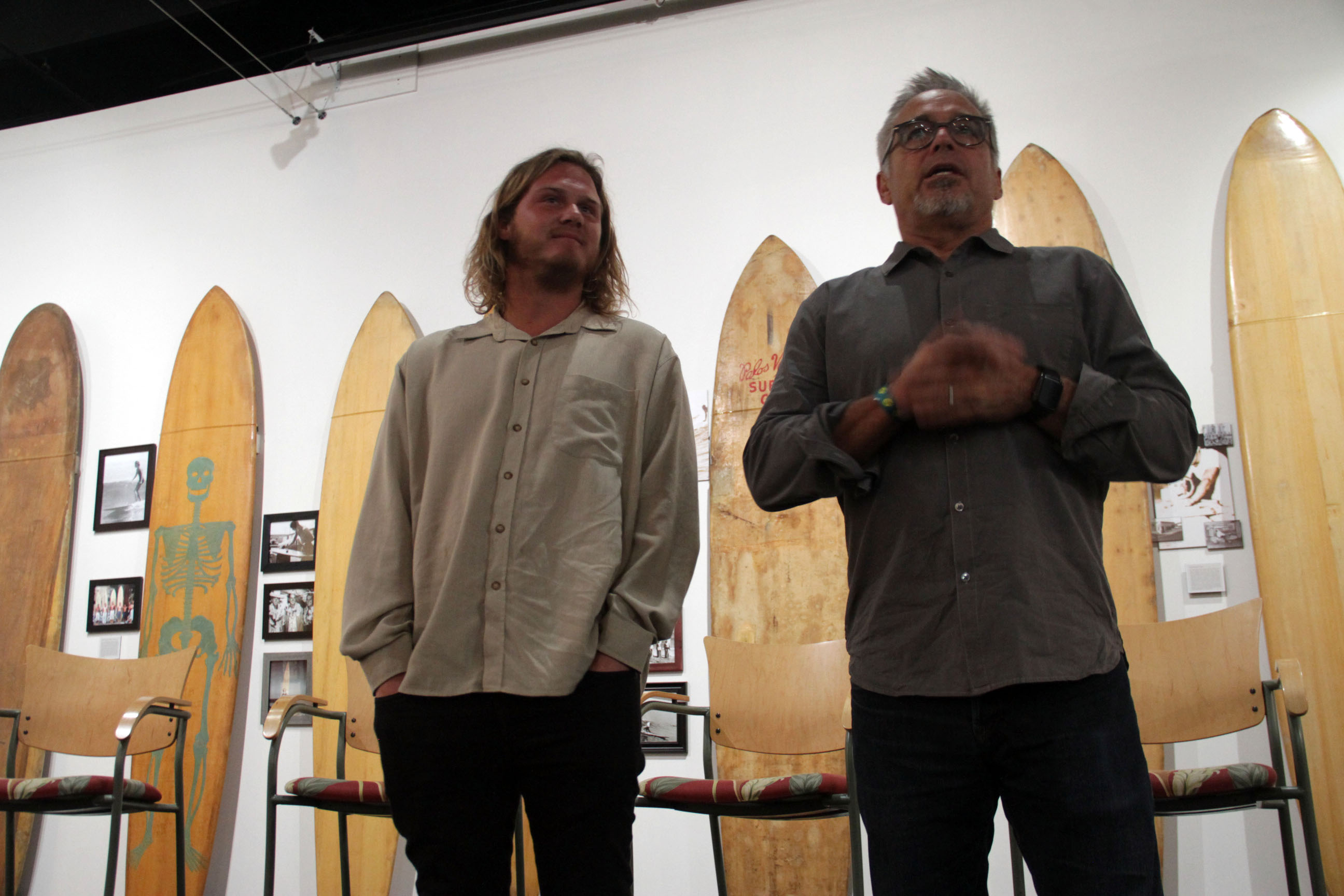 Nick Green, a 24-year-old, up-and-coming surf photographer from Tasmania, has been enjoying what he considers to be a “crazy whirlwind of events” since September—when he was announced as the winner of the Surfing Heritage and Culture Center’s (SHACC) “Follow the Light” (FTL) photo contest.

In addition to receiving the $5,000 grand prize, Green has been given the opportunity to shoot for the Surfer’s Journal and has spent the past month in Hawaii shooting for Vans. He returned to San Clemente over the weekend to attend the opening of this year’s Follow the Light Exhibit at SHACC, where his work, along with that of his fellow finalists, is now on display.

“It’s definitely an honor; it’s been a crazy whirlwind of events,” Green told San Clemente Times at the opening of the exhibit on Saturday, Nov. 23. “Been home for like a week or two back in Tasmania . . . (it’s) been a month in California and did a month in Hawaii.”

His home of Tasmania, he said, is a big part of what’s driven his ability to take award-winning shots, as it’s “a really beautiful place, so it’s easy to take nice photographs.”

“I’ve been lucky enough to see amazing things because where I live is a pretty amazing place,” Green said.

While Tasmania has provided Green with the beautiful backdrop and scenery for his work, what’s really driven him to pursue the art of photography since he got his first camera at age 16 has been his battle with mental health.

“I had some issues with mental health throughout my childhood, so photography really kind of helped me deal with that. It was a creative outlet for me,” he said, adding: “You can see that as a reflection in my work, I guess. I’m not amazing at talking about it, but I feel like sometimes the photos can talk about it where I can’t.”

He later pointed to one of his black-and-white photos on display that’s part of his Dark Hallway series—“an ode to the mental health stuff in my life.” The photo, which was taken inside a wave looking out of its mouth, is “kind of like the darkness and finding beauty in the darkness.”

SHACC welcomed the local community to its headquarters in San Clemente on Saturday, allowing guests to get a first look at Green’s photos in the Follow the Light exhibit, as well as the photos taken by this year’s other four finalists: Nolan Sullivan, Ryan Mack, Shane Grace and Paul Greene.

Follow the Light is a grant program initially started in 2006 to honor the late surfing photographer Larry “Flame” Moore, who was the photo editor of Surfing Magazine for more than 30 years before his death in 2005.

Moore, who was all about taking bright, front-lit photos, was known for mentoring young surf photographers. After his passing, Moore’s family and friends started the Follow the Light program as a way of continuing to support young, aspiring surf photographers

If “you were willing to do what Larry told you to do, he would really care about you and take you under his wing,” FTL Committee Chairman Don Meek recalled. The program, he also said, is meant “to continue (Moore’s) legacy.”

“It’s really about identifying and honoring the next generation of surf photographers, to make sure that we keep that art alive,” Meek later said.

In 2016, Moore’s family asked SHACC to take over the program, but it wasn’t until this year that the center officially relaunched it. Upon doing so, SHACC received nearly 100 submissions from around the world, Meek said.

To judge the entries, SHACC enlisted the help of previous winners, as well as surf photographers who have been “really influential of culture and surf,” Meek said. Out of the 97 photographers in the contest, all between the ages of 16 and 25, only five were selected as finalists.

The exhibit is certainly about showcasing the photographers’ best works, but there was also an X-factor involved, Meek said.

“It wasn’t just the photos; it was also a series of essay questions to answer,” he said, adding that “one of the things that was so important about Larry was his attention to detail. He was meticulous, and so while we got 97 entries, not all of the entries were meticulous … one of the things that really got an entry through was how much attention to detail did these guys pay.”

Four of the finalists each received a $1,000 grant, while Green was awarded the $5,000 grand prize. For Green, that money will help pay for some new equipment and spruce up his van back home, as well as assist in his travels to gain more experience in capturing great moments.

And while the money is an essential component, Meek said the most important aspect of the program is providing a working opportunity to the winner—something far more important to a young photographer.

“It’s one thing to get $5,000, but you can spend that on a lens or a new water housing,” he said. “But to actually give them an opportunity to work and get paid for their work and be coached and mentored by people who have gone before them is a really important thing.”

The FTL exhibit is currently open and is expected to be on display for the next couple of months, Meek said. To find out more information about the program, as well as about SHACC and its hours of operation, go to shacc.org.