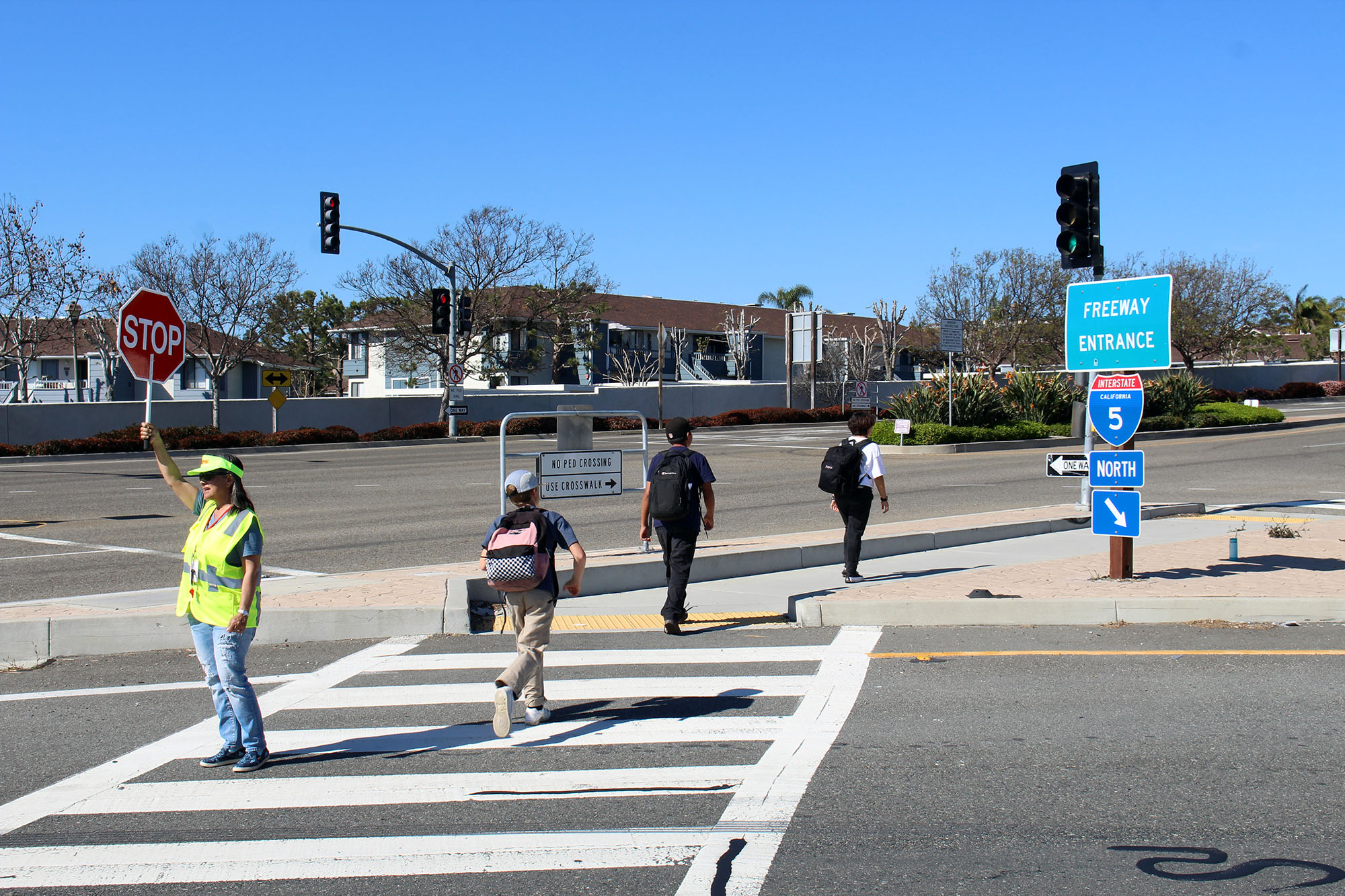 Featured Image: A crossing guard manages a crosswalk near the area of the Interstate 5 and Vista Hermosa intersection as Shorecliffs Middle School students head home for the day on Tuesday, March 22. Photo: C. Jayden Smith

Despite the city amending a contract with All City Management Services (ACMS) in late 2021 to add five crossing guards near Shorecliffs Middle School, one position had remained open months later—that is, until this week.

During the most recent San Clemente City Council meeting on March 15, Mayor Gene James mentioned concerns regarding the vacancy at the time, even going so far as to say he was pulling his hair out.

City Manager Erik Sund said the Public Works Department had spoken with ACMS on a weekly basis to find a solution—discussions that come as ACMS recently added a signing bonus for new staff. James responded to Sund’s mention of potentially paying staffers more, saying it might be necessary if there is not a resolution by the next meeting.

Amid calls from concerned parents over children’s safety when walking to and from school, the City Council last December voted to amend the contract, adding the crossing guards near the area of the Interstate 5 and Vista Hermosa intersection.

ACMS has struggled for an extended time to find school crossing guards, according to Operations Manager Michele Busch.

The job requires split shifts in which a staff member wakes up early in the morning and has to come back in the afternoon, and it can be dangerous with the amount of traffic nearby, making the position less than glamorous.

However, the crossing guards “make a world of difference by being out there,” Busch said during an interview on Monday, March 21.

“It’s become very difficult for us to find quality people with integrity who want to do the job,” Busch said, adding: “It is an industrywide issue that we are having since COVID, especially in San Clemente. We have never had trouble staffing prior to COVID.”

The contractor had to compete with unemployment payments that allowed people to make more than they would as a crossing guard, earning $45 a day for an hour and a half to two hours of work.

On Tuesday, March 22, San Clemente Times learned that ACMS is fully staffed for the area in question—though without much margin for absences, as it lacks a comfortable number of alternates.

Currently, four crossing guards are split in pairs at both the intersection of Avenida Vista Hermosa and the Outlets at San Clemente, and the on/off ramp at the Interstate-5 northbound exit at Vista Hermosa. Busch said it would not be safe to only have one crossing guard at a location.

“We stacked the Outlets first, (as) that was the priority that the city had asked for,” she added. “So, those two were staffed, and then the last to be staffed is the on/off ramp at the (I-5) freeway.”

Area Supervisor ViAnn Patterson said Tuesday that the new crossing guard to be stationed at the ramp may start around Thursday, March 24, but she is still in constant need of alternates.

ACMS had told the city that it would add the crossing guards as soon as possible for those sites, but it took until mid-February to hire the staff at the Outlets and until the week of March 14 to place people at the ramp.

“Is there a delay in that? There was a delay, definitely,” Busch said. “But like I said, it takes time to find the right people to do those intersections.”

James said he knew the need to add the last crossing guard at the ramp was urgent, as he expressed in an email on Monday to SC Times.

“Due to the nature of the intersection, I was quite anxious to get it staffed with crossing guards in order to ensure the safety of the students walking to and from school,” he wrote.

Strong crossing guards are needed at the especially large intersections, Busch said, which means people who are able to do all the movement necessary, fiercely ensure children’s safety against oncoming traffic, and who have integrity.

Recruiting for the position is widespread. The firm advertises on typical job-posting sites such as Indeed and Craigslist, on social media sites including Facebook and Nextdoor, as well as through word of mouth and at schools themselves.

Busch added during the Monday interview that she was confident the final position at the on/off ramp would be staffed without much further delay. It also helps that most crossing guards return for the next school year once they are with the company.

She also made sure to mention that ACMS is hiring school crossing guards in general.

“We would love to talk to anybody who is interested in doing the job,” Busch said. “It’s such a great job. It’s an important job. We’re out there keeping these kids safe as they go to and from school each day.”