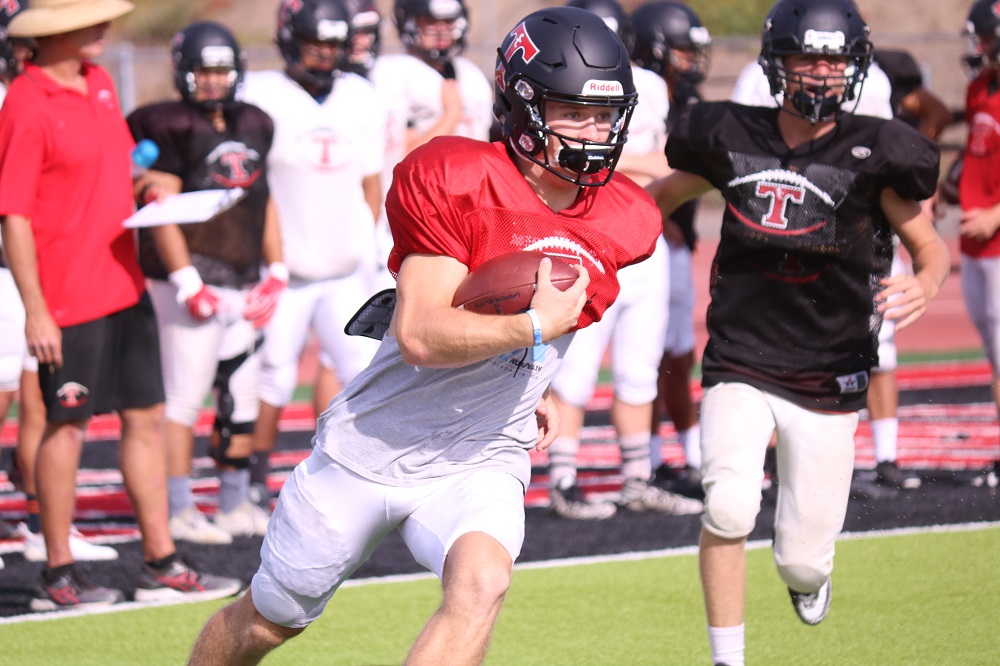 On the Other Side: After a Gauntlet Nonleague Schedule, a Tested San Clemente Football Enters League

No team is more ready to buy into that phrase than San Clemente’s football team.

After their worst start record-wise since 2013, the Tritons (2-4) open South Coast League play on Friday at Tesoro (4-2), the first big step toward qualifying for the CIF-SS Division 1 playoffs.

“These games matter,” San Clemente coach Jaime Ortiz said. “Whether we lost to Edison or beat Edison, lost to Torrey Pines, that helps, but these games determine our future. We have four games to see where we’re at. Our goal every year is to be league champs and work from there.”

The first six games have been a roller coaster for San Clemente.

The Tritons won their season-opener in convincing fashion over Oceanside, 34-19, before losing four consecutive games for the first time since 2013. Three of the four losses came by a combined six points with games against the top two teams in San Diego, Torrey Pines and La Costa Canyon, and Division 4’s No. 2 team, Corona del Mar.

The Torrey Pines and Corona del Mar games were the biggest heartbreakers for San Clemente, losing on an onside kick and last-second field goal in the former and because of a fumble in the final minute in the latter.

It was a gauntlet of a schedule, but the Tritons stuck together and beat Edison in their final nonleague game, 31-24, to come out on the other side.

“I learned that we handle adversity really well,” quarterback Brendan Costello said. “We had a four-game losing streak, and a lot of teams would have rolled over and said we quit. We kept our heads high. We keep grinding, and we’re never satisfied.”

The offense has been there all season, with the Tritons averaging nearly 34 points per game, and Costello has completed 65 percent of his passes for 1,231 yards and 10 touchdowns.

Senior RJ Donaldson has led on the ground with 513 yards and 10 touchdowns on 84 carries, and Costello is right behind there, too, with 450 yards and five touchdowns on 62 carries.

Senior Jaydel Jenkins is far and away the leading receiver with 551 yards and five touchdowns on 34 receptions. Senior Jay Baggs and junior Cian Smith each have over 300 yards receiving.

Where the Tritons needed to buckle down over the first set of games was defense. San Clemente only had two returners, seniors Ray Ferrell and Rob Farney, and lost one, Farney, to injury.

“We weren’t really established as a defense,” Ferrell said. “We had a lot of new players, a lot of new faces, we didn’t have the experience we were used to having. Those experiences (over the first six games) we learn how to close games and finish them once we get down to the fourth quarter.”

Younger players such as sophomore Corey Robertson, co-leader in tackles with Farney at 66, have stepped up and help settled down the defense over the last two games. Junior Treton Brail, sophomore Cole Batson and previously inexperienced seniors Ryan Altman and Jake Brannon have all contributed to the defensive effort going from allowing nearly 40 points per game in the first four games to 22 points per game over the last two.

On Friday, the Tritons travel to Tesoro, which has lost its last two games after a 4-0 start.

Tesoro opened with a win over Edison, 17-6, and scored 34 points or more in their next three wins. The Titans were grinded to a halt against San Juan Hills, 7-6, and decidedly lost their homecoming game last week to Division 2’s No. 6 Los Alamitos, 34-16.