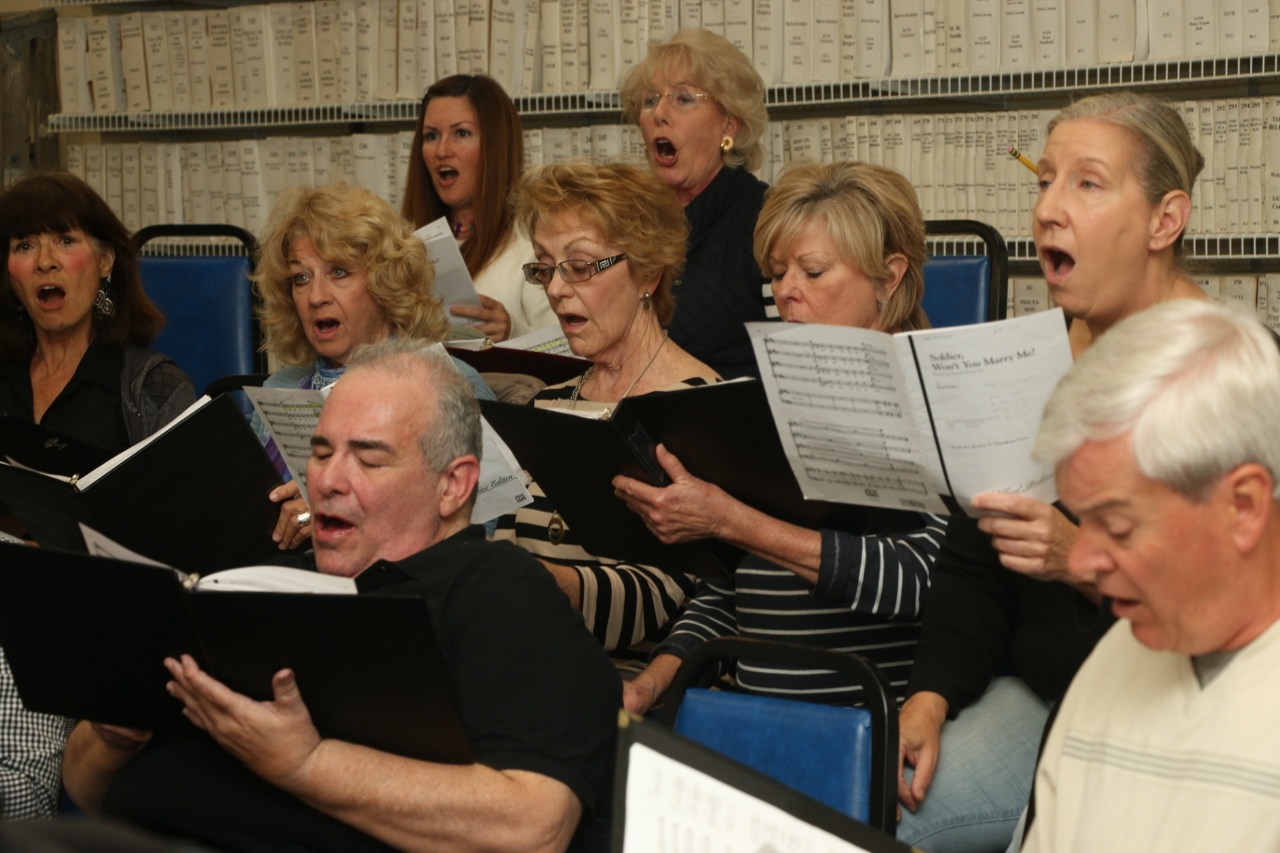 Giant volumes of gospel sheet music lined against the walls of the small room in San Clemente Presbyterian Church’s basement, where the San Clemente Choral Society (SCCS) rehearsed for their spring play.

Their vocals chimed together, having practiced this song for at least the last 11 weeks.

“Off to the tailor she did go/ as fast as she could run/ bought him a coat/ the best that there was/And the soldier put it on!”

But then, they were stopped.

The San Clemente Choral Society practices prior to their May 6 concert, trying to emote in the middle of a piece they will perform during rehearsal on Tuesday, April 25.

The San Clemente Choral Society practices prior to their May 6 concert, trying to emote in the middle of a piece they will perform during rehearsal on Tuesday, April 25.

“OK, right on that ‘…off to the tailor,’ pause, and you want to look surprised,” instructs director Laura Harrison. “You need to give the looks of surprise, because she’s going to buy this coat for him.”

The song they were singing was a rendition of the 19th-century folk tune “Soldier, Soldier, Won’t You Marry Me?” adapted by Paul Halley to modern show-tune breadth. It’s a more urgent and dramatic version and demands the power and range of the dozens of different tunes and octaves to tell a short, somewhat patriotic, story within the piece.

Harrison, who will conduct the SCCS for the first time in front of an audience during the May 6 performance, is one of the newest members of the chorus.
Harrison recommends the music the chorus performs, but the SCCS board must approve it first.

“It’s great because I didn’t really know who I was working with, so I chose a lot of music (for the spring performance) that spans across many different types of music, from jazz pieces to a few well-known songs,” Harrison said.

Their final rehearsal is Tuesday.

Sal Morreale, president of the SCCS board of directors, said the organization is trying to grow its membership, but typically the size of the chorus varies from season to season. Morreale said they currently have 30 singers and can have up to 60.

“We do two performances a year: one in the spring and one in the fall,” Morreale said. “We usually take a summer break and then start up 11 to 12 weeks out from the Christmas concert.”

The seasonal concerts are held in the San Clemente Presbyterian Church main amphitheater.
SCCS performs all kinds of music, from church chorus music to jazz to numbers from musicals.

The society was founded in the fall of 2004 in order to promote choral music in South Orange County, according to the organization’s website. The society is mostly comprised of singers from San Clemente, Dana Point and San Juan Capistrano.

As part of their charitable work as a nonprofit organization, the SCCS has a foundation that benefits San Clemente High School music programs.

People interested in auditioning do not need to have any experience singing; they just need to be willing to learn how to harmonize with the rest of the chorus.

Board member Leslie Pumper, who has been with the organization for six years, said she thinks SCCS has been able to thrive for more than a decade because of the singers’ commitment to furthering their study of music.

“Many of our performers have, at some point in their lives, practiced music,” Pumper said. “This is a way for them to get back into it.”

Rehearsals are 7-9:10 p.m. on Tuesdays at San Clemente Presbyterian Church.