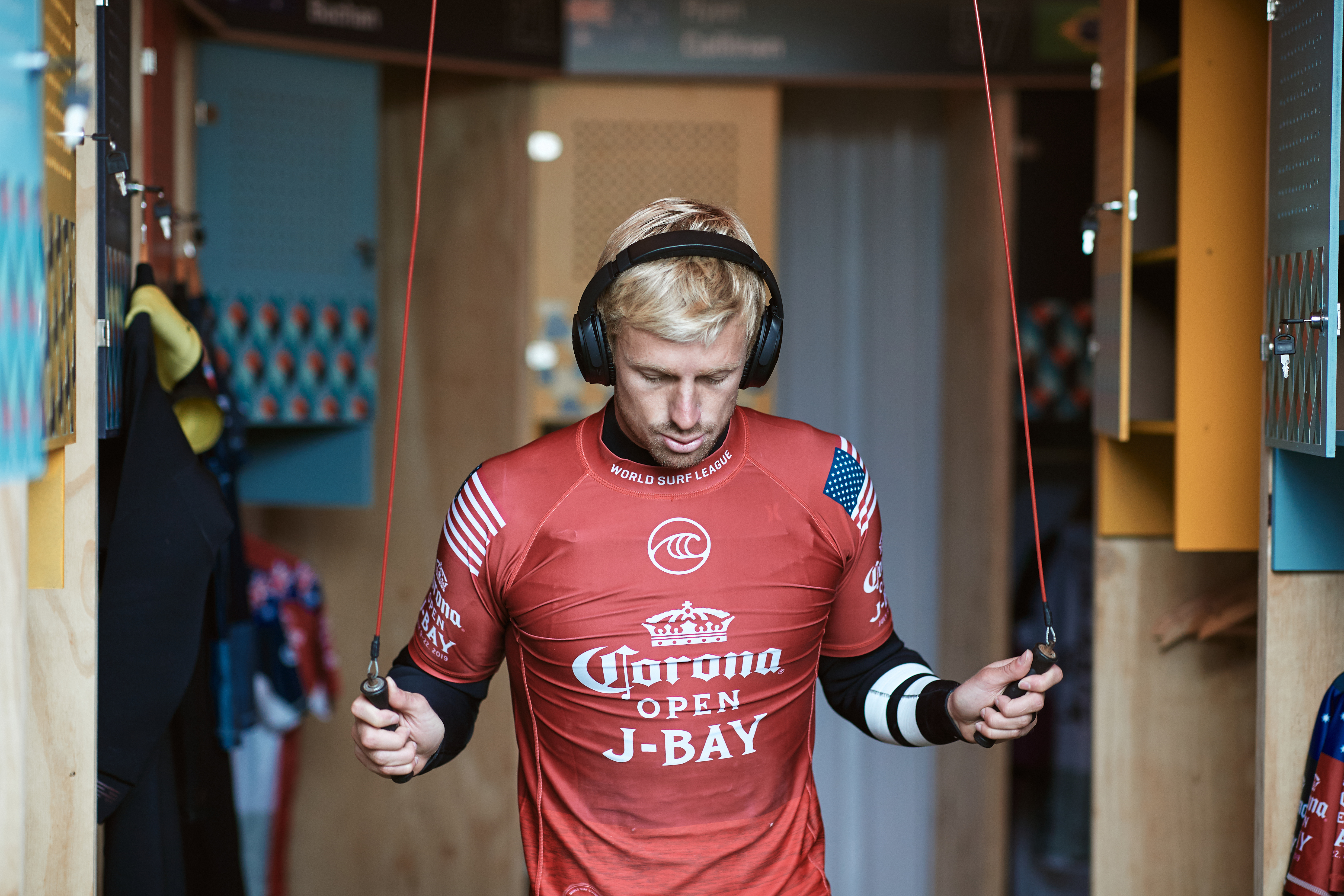 Sitting on Top of the World

After a solid performance in South Africa, San Clemente’s Kolohe Andino heads home ranked No. 1 in the world.

There are 11 contests on the WSL’s Championship Tour. After the sixth stop in Jeffreys Bay, South Africa, San Clemente’s Kolohe Andino is ranked No. 1 in the world and has taken ownership of the coveted gold leader’s jersey.

“Being in the World Title race means there’s a lot of extra noise, and I feel a lot more people are watching,” Andino humbly said after taking the pole position.

After beating Brazilian rookie Deivid Silva in the quarterfinals of the Corona Open J-Bay last week, Andino overtook the No. 1 position from John John Florence, who suffered a knee injury in Brazil last month and is expected to be out for the rest of the year.

“Honestly, I think the gold jersey has been a bit of a burden; no one has taken it and ran with it since there’s been a gold jersey,” Andino said.

Coming up less than a half-point short against reigning world champion Gabriel Medina in the semifinals, Andino had to settle for third place in the contest, but the points he was awarded for the result were enough to put him atop the WSL ratings. The last time a surfer from San Clemente contended for a world title was Shane Beschen in 1996. He finished that year ranked second to Kelly Slater, who incidentally was surfing in the J-Bay contest this year at the age of 47.

“It’s still a long year, and we’re technically at the halfway point, and I’m just stoked with the beginning of my year,” said Andino, careful to not get ahead of himself and stay focused on what’s yet to come.

Putting together the best season of his career, consistency has been the key to Andino’s success this year. He started the year with a second-place finish at the Quiksilver Pro on the Gold Coast of Australia. He earned another runner-up result at the Margaret River Pro, and followed that up with a third-place finish in the Oi Rio Pro. But throughout his career, Andino has struggled to find his rhythm at J-Bay and has had a string of poor performances there. This most recent result not only reverses that trend, it has to give him considerable momentum and confidence.

“J-Bay has always been a really difficult wave for me to surf, so I’m just really stoked to come away with a keeper result,” Andino said. “The people who surf this wave well are really confident; they’re not nervous if they are not going to make the wave, even if they just do some big turns, because the wave is really fast. But you can still sit back and do some big turns. I’m just trying to enjoy it and have fun. We’re at one of the wonders of the world if you’re a surfer. I’ve been spending a lot of time in the water, and I’m just having fun.”

As Andino noted, there’s still a lot of surfing to be done this year. The next world tour stop will take him to the South Pacific for the Tahiti Pro. Held at Teahupoo, it is one of the heaviest, shallowest waves in the world. Last year, Andino made the quarterfinals at the contest, and the year before, he made the semifinals. He’s been going to Tahiti for years and should feel right at home in the warm, blue barrels.

From there, Andino will have the Freshwater Pro up at the Surf Ranch in Lemoore, CA, followed by two contests in Europe and then the final stop at the Pipe Masters in Hawaii.

Hoping to slow Andino down will be part-time San Clemente resident Filipe Toledo. Currently sitting in second, he’s considered the best small-wave surfer in the world and is sure to contend all year long.

“As for looking for areas to improve, I have to work on these legs. You might have seen they look pretty skinny out there. I gotta do more squats,” Andino said, always looking for ways to elevate his game.

Next week, as the U.S. Open of Surfing in Huntington Beach gets underway, Andino, Griffin Colapinto and Patrick Gudauskas are listed among some of the top seeds in the contest. Huntington Beach’s Kanoa Igarashi will be attempting to win his third Open title in a row. The U.S. Open begins on July 27.