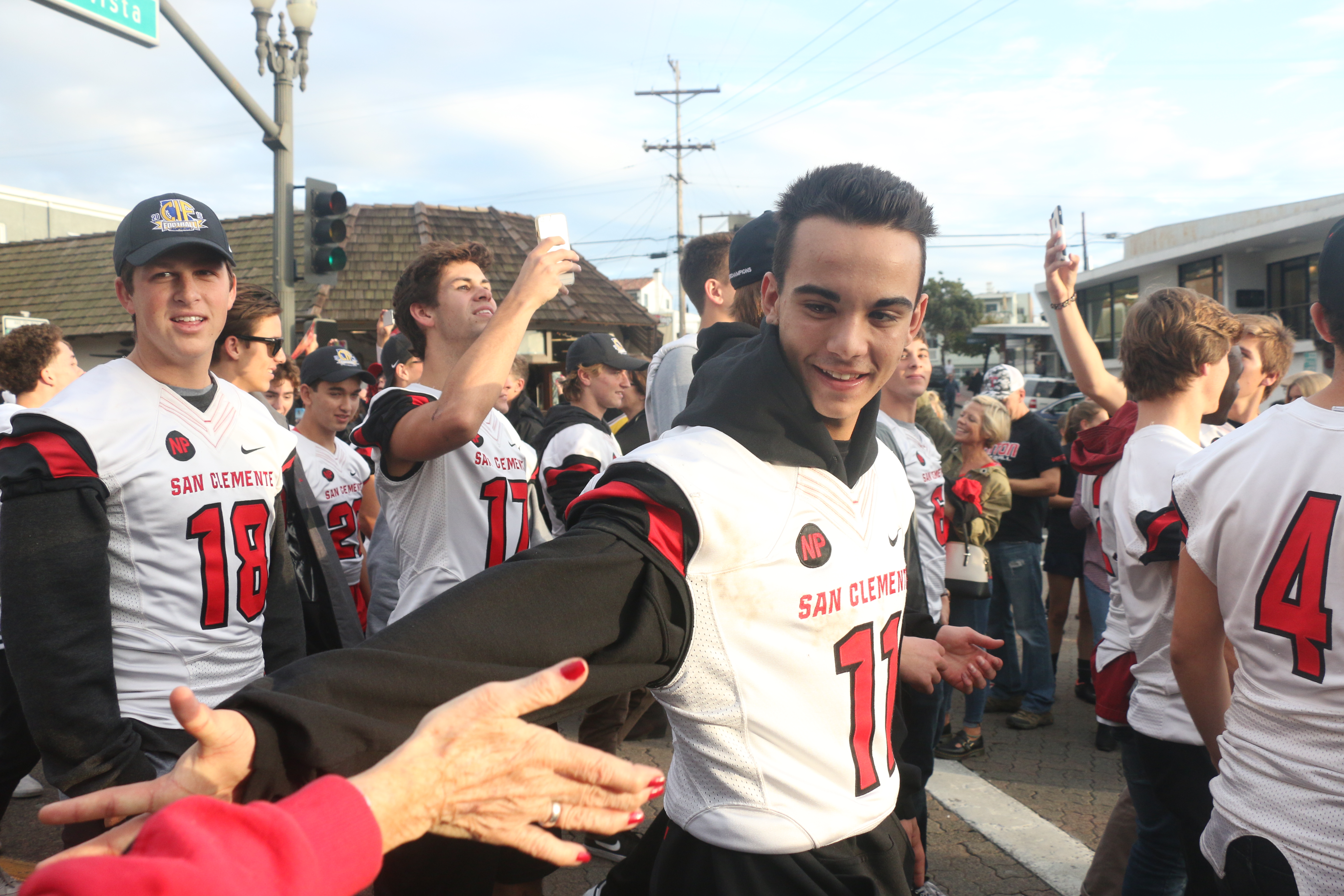 Mel and Laurie Pasquale wave to the crowd during the Tritons football parade. Photo: Eric Heinz

Jack Sears shares a laugh with his teammates during the Triton football parade. Photo: Eric Heinz

A fan shows his support for the Triton football team during its State Championship parade. Photo: Steve Breazeale

Only in San Clemente can you find the type of passion and community support that was on display down Avenida Del Mar on Wednesday afternoon.

Only in San Clemente does the city plan for and execute a parade for the local high school football team in only four days.

Only in San Clemente do you see cops, firefighters and local dignitaries all chip in their time and effort to help congratulate the local team, which just won the CIF State Division 1-A Championship. It felt like the president was coming to town.

Yes, you’d be hard pressed to find a team anywhere that is as interwoven into the fabric of a community as the Tritons.

The phrase “One Town, One Team” was everywhere on Wednesday, on posters, shirts and banners, as hundreds of people lined the streets of Del Mar to give the Tritons a hero’s welcome home after finishing off a historic season with a State Championship in Sacramento on Dec. 17.

It was a scene straight out of a movie.

The band led the way for the Tritons, and the cheerleaders and student cheering section followed, throwing out State Championship T-shirts to the crowd. Then came a cavalcade of cars, and up front were Mel, Laurie and AJ Pasquale, stalwarts in the community and the “first family” of Triton football.

Then came the team, with quarterback Jack Sears carrying the state championship trophy the whole way down Del Mar to the community center, where the entire City Council and Senator Pat Bates were there to greet them.

Bates presented head coach Jaime Ortiz with an official resolution that she said will hang in her office, and “Will be part of the history of the state of California.”

Ortiz’s speech outlined the Tritons’ road to the state title game, which featured a slew of top-ranked opponents and difficult road games. After thanking the players and coaches, he touched on the fact that the measure of this group’s already impressive character will come further down the line.

“I’m a firm believer as a coach that our true definition of success will be 10 to 15 years from now. Are they a good husband? Are they a good dad? Those sweatshirts are going to fade, those rings are going to get lost … but your legacy as a person and as a dad, and as an employee; to me that’s the true definition of success,” Ortiz said. “Whether we’re CIF champs or we go 0-10; to me, that’s the epitome of our program, to build young men.”

Councilman Chris Hamm, decked out in Triton red, closed the ceremony with a “We are, SC!” chant, urging the crowd to repeat it louder, and louder. “Doesn’t that feel good?” Hamm said afterward with a laugh.

The team huddled together one last time and left smiling to join their family and friends.