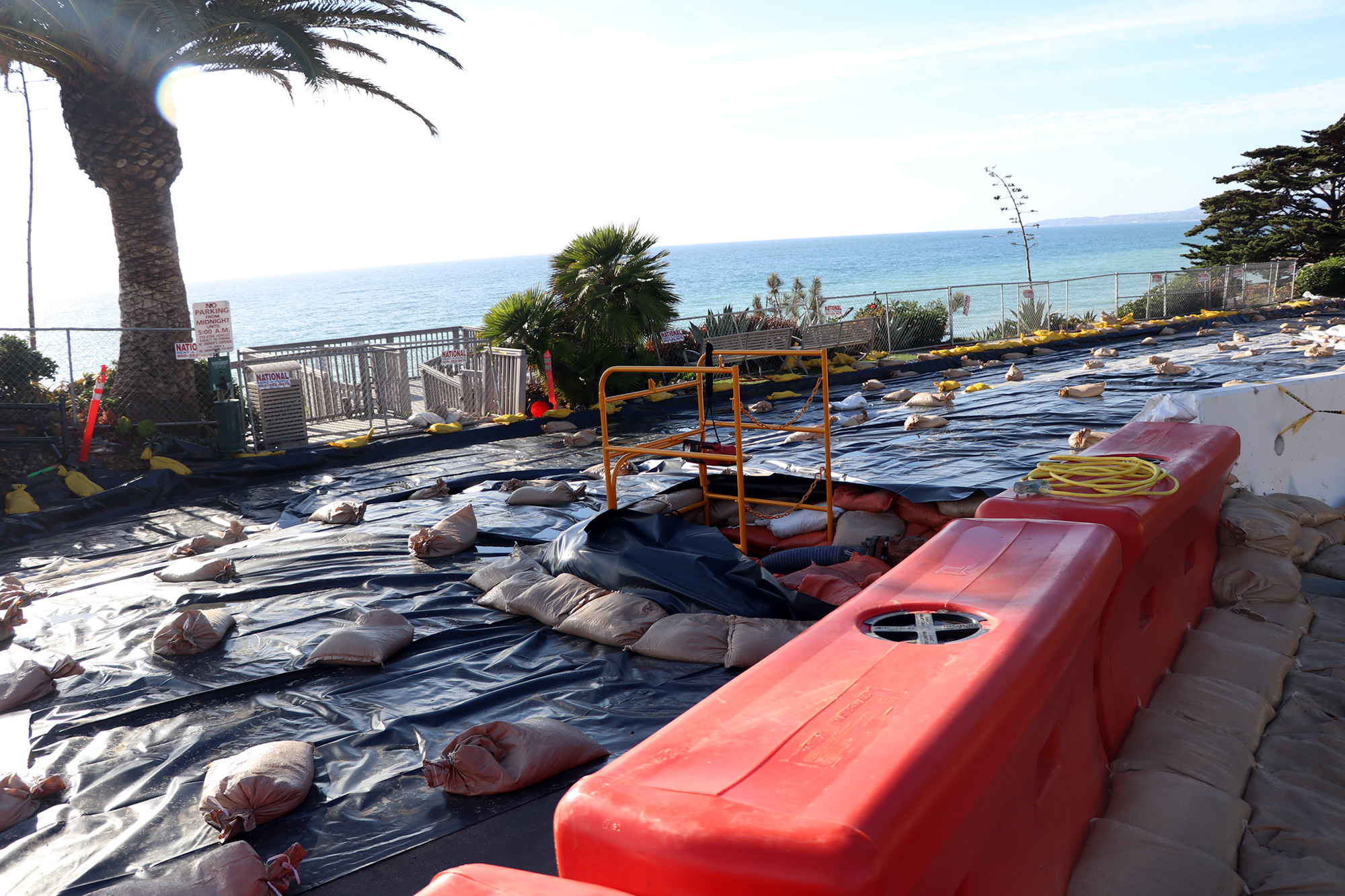 Featured Photo: After a crack in the parking lot of the Cypress Shores community clubhouse worsened last month, the HOA took steps to divert stormwater away from the area. Photo: Shawn Raymundo

The foundations of a few coastal-bluff homes within the Cypress Shores community in South San Clemente remain compromised after cracking in the affluent neighborhood significantly worsened last month.

The cracking and slope failure—the reactivation of an ancient landslide—is believed by experts to be the result of coastal erosion along the toe of the bluff, prompting the Cypress Shores Homeowners Association to seek emergency approval from the California Coastal Commission to install stabilization structures.

Metrolink this month completed a project to halt movement of the slope and reduce erosion by placing about 11,500 tons of new riprap, or large boulders, on the seaside of the railroad tracks, which sit directly below the blufftop homes and had reportedly moved about 15 inches.

“For now, we hope that the slippage has slowed or perhaps totally stopped. And then that will hopefully buy time for a more long-term solution,” Councilmember Chris Duncan said of the slope failure and movement of the tracks.

“That area is unstable, because it’s all an ancient landslide. … As a result, it’s not stable, and it’s not able to withstand pressures such as the pressure of all of that weight of the slope, forcing down to the bottom of the bluff,” he continued.

Tim Brown, a former councilmember who’s assisting the Cypress Shores HOA on this matter, echoed those comments, stating that the riprap project has effectively “stabilized the portion (of the landslide) a little, but we still have to address the slope above the rail line.”

As a long-term solution, geologists have proposed implementing caissons, or retaining columns, to stabilize the foundation of the bluff, an endeavor that requires the Cypress Shores HOA to apply for a coastal development permit from the Coastal Commission.

Brown said on Wednesday, Oct. 13, that the HOA is looking to submit the application by late this week or early next week.

“For the HOA, they obviously want to do the best they can in addressing this issue, correcting it and ensuring that it won’t be a problem in the future,” Brown said, before pointing to the erosion of the beach as the underlying issue that will need to be addressed down the road.

Jeffrey Beaumont, an attorney representing the HOA, told the Orange County Register last month that costs associated with needed repairs will likely fall on the shoulders of the homeowners, the HOA and potentially other stakeholder agencies.

Asked how much the installation of the caissons is estimated to cost, Brown said that the price tag is an important factor that stakeholders are interested in, but the main focus is submitting the application to the CCC for expedited approval.

“There’s costs that are ongoing to keep (the subsidence) from getting worse, but I think everyone is 100% focused on getting the fixes in place and getting the sand replenishment,” Brown said.

According to a report to Metrolink’s Board of Directors in late September, the geological firm that Cypress Shores hired, GMU Geotechnical, found that the slope failure continues to move “at a variable rate.”

“The rate appears to be dependent on tidal and climactic variations,” the report explained, adding: “The progression of movement within this landslide will impact the railroad.”

Metrolink spokesperson Paul Gonzales said this week that the railroad operator is not part of the discussions on identifying long-term solutions on the slope failure, as those are being held among the Orange County Transportation Authority, city of San Clemente and Cypress Shores.

Atop the bluff, the cracking and subsidence have had significant impact on four homes and the parking lot of the neighborhood clubhouse. Two of the homes, according to the city, have been red-tagged, requiring the homeowners to vacate the property, while a third home has been yellow-tagged.

Cracks at the four homes were first discovered a year ago this month, according to claims the homeowners filed against the city this past April. The claims alleged that the city’s sewer utilities were likely to blame for the slope failure that caused “ongoing distress and damage,” such as “cracks in the floors and ceiling.”

According to City Attorney Scott Smith, the California Joint Powers Insurance Authority, the city’s insurance carrier, denied the claims, which had sought between $1 million and $1.5 million in restitution for repairs and other related costs.

In April, the Cypress Shores HOA requested the city sign a tolling agreement allowing the two parties to work cooperatively on resolving the matter and avoid litigation.

Underscoring the environmental factors at play, Duncan said the incidents at Cypress Shores and the railroad track highlight the effects of sea-level rise and coastal erosion on San Clemente’s doorstep.

“It’s kind of a code-red alarm that we need to be thinking strategically about the future and how to protect our coastal areas and prepare for further sea-level rise and coastal erosion, rather than trying to put the fire out once it’s started,” he said.