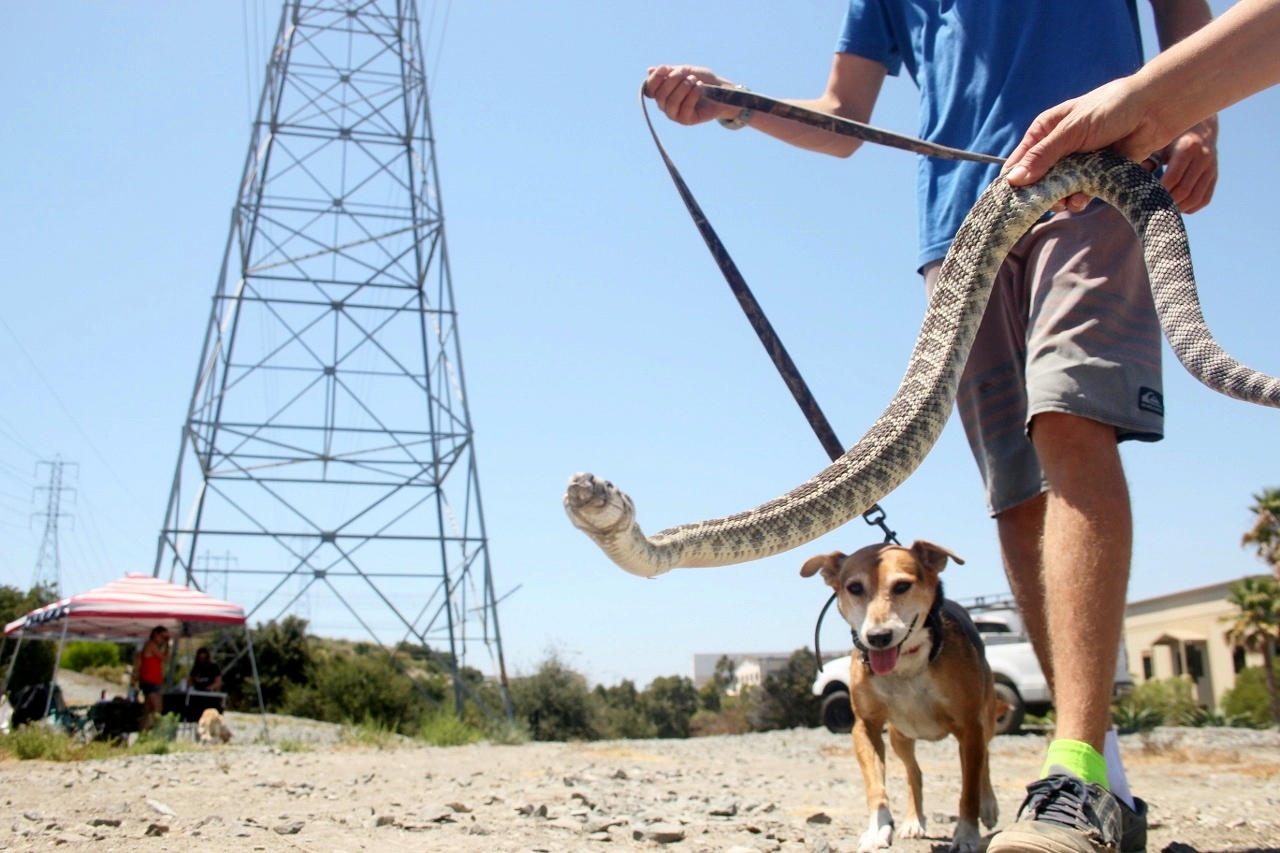 Subtle nips or hesitation from an owner’s dog may save them from a deadly encounter with a rattlesnake.

Waymond “Rusty” Debreceni, the owner and lead trainer of W.D. Dog Training and Rattlesnake Aversion Training, has been conducting classes for more than 17 years to help dogs identify rattlesnakes. On Saturday, July 29, he worked with his two sons, his daughter and his fiancée, who helped contain and look out for the snakes, on the outskirts of southern San Clemente.

Southern Pacific rattlesnakes, described as brown to olive-brown in color with dark brown blotches on the back, were used during the lessons on Saturday, as they are abundant in the area.

“These guys are found everywhere,” Debreceni said. “We use all rattlesnakes…indigenous to California.”

Younger rattlesnakes will inject more venom into their victims, Debreceni said, as they’re still learning how to control the injection.

“We train (the dogs) on sight, sound and scent, and scent is the biggest key,” Debreceni said. “The dogs will go through six stations, all depending on how they are doing. The biggest problem is…we’re on the hiking trails so much that it’s a 50/50 chance whether the snakes are going to rattle or not. That’s why we implement these classes.”

Anti-venom costs about $8,000 to $10,000 per vial, Debreceni said. Recent reports showed attack victims were billed upwards of tens of thousands of dollars because it takes more than a few vials to completely nullify the venom.

Dogs typically have a heightened sense of smell, but it’s not as supernatural as its described in folklore. That said, having more than 50 times the olfactory receptors and odor detectors in the nose than humans, most breeds of dogs are able to pick up acute scents.

“The dogs will remember this for life, but it doesn’t guarantee they’re always going to remember,” Debreceni said. “If they’re not brought back to refresher classes, they could forget. People need to understand everything the dog is doing.”

W.D. Dog Training and Rattlesnake Aversion Training instruct dogs and their owners on what to look for when coming in contact with a rattlesnake in the wild on Saturday, July 29, in southeast San Clemente. Photo: Eric Heinz

A chocolate labrador sniffs at a pile of muzzled rattlesnakes that have been milked of their venom during a training session on Saturday, July 29, in southeastern San Clemente. Photo: Eric Heinz

Waymond “Rusty” Debreceni holds a muzzled rattlesnake with his son during a training session on Saturday, July 29. Photo: Eric Heinz

These rattlesnakes are used as part of an aversion training for dogs on Saturday, July 29. Photo: Eric Heinz

A labrador runs around a snake pit after being trained not to go near it during a rattlesnake aversion clinic by W.D. Dog Training on Saturday, July 29, in southeastern San Clemente. Photo: Eric Heinz

Some dogs understand what to do almost immediately, but with some dogs it takes additional training. Debreceni said if a dog is not accurately identifying the snake as a danger, he will give the dog a failing grade until it learns. But he said he’s only failed three dogs in his 17 years of training.

All the snakes are milked of their venom and muzzled twice to ensure no accidents take place, while audio recordings mimic rattlesnakes’ tail sounds, and shock-collars replicate being bitten.

“Training people to do this is not easy,” Debreceni said, adding he has never been bitten by a rattlesnake. “If you get bit by one of these (rattlesnakes), it’s a 50/50 chance that you’re going to make it.”

The reason for using live snakes is to allow the dogs to gain experience accurately identifying rattlesnakes in the wild. The classes are also along regularly used hiking trails to simulate an every-day walk. Debreceni uses sound simulations to make the dogs familiar with the rattle they make.

As the dogs approach the snake at one of the stations, Debreceni gives them a light shock as soon as they have the reptile’s scent, thus a Pavlovian response to the snakes is expected to develop.

“As soon as the dogs understand that they shouldn’t go near the snake, the idea is that they will create a wide berth between you and the snake,” Debreceni said.

On Saturday, the four dogs the San Clemente Times witnessed seemed to grasp the idea immediately. As soon as they received a light shock, they would be immediately deterred from the area.

But it’s not just the master of education who has to train the dogs. Debreceni said it’s most important that the dog owners themselves understand how the animals react to the presence of snakes.

“If I don’t teach (the owners), what good does it do?” Debreceni said.

Jay Thornton participated with two of his American labs, and both dogs picked up the idea very quickly. The chocolate lab yelped as soon as the stimulant was applied and wouldn’t go anywhere near the snakes after that, even pulling the owner away from the snake-infested station.
“One time, both of the dogs walked up on a sunbathing, big, fat, 5-foot rattlesnake on a golf course,” Thornton said. “Luckily, the snake did not react, and my wife was able to call them back. They had no idea, but now they do.”

Giving the dogs positive reinforcement is also extremely important, Debreceni said, so that they feel motivated to alert the owners.

“We need to make sure that their obedience does not get in the way of the training,” Debreceni said. “If it does, it makes it a lot harder for the dog to understand the commands.”

Jessica Price, the owner of Seaside Hounds, a San Clemente-based business that takes dogs on nature runs while their owners are away, also works with Debreceni and refers clients to his workshops. Price said she has had her own dogs notify her of rattlesnakes in the area while hiking the trails in San Clemente.

“I’ve been working with Rusty and the dogs for about four years, and people say that their dogs are alerting them when rattlesnakes are present,” Price said.

The final rattlesnake aversion training of the year with W.D. Dog Training will take place on Saturday, Aug. 26, and lessons will continue next spring.

What You Need to Know About Rattlesnakes