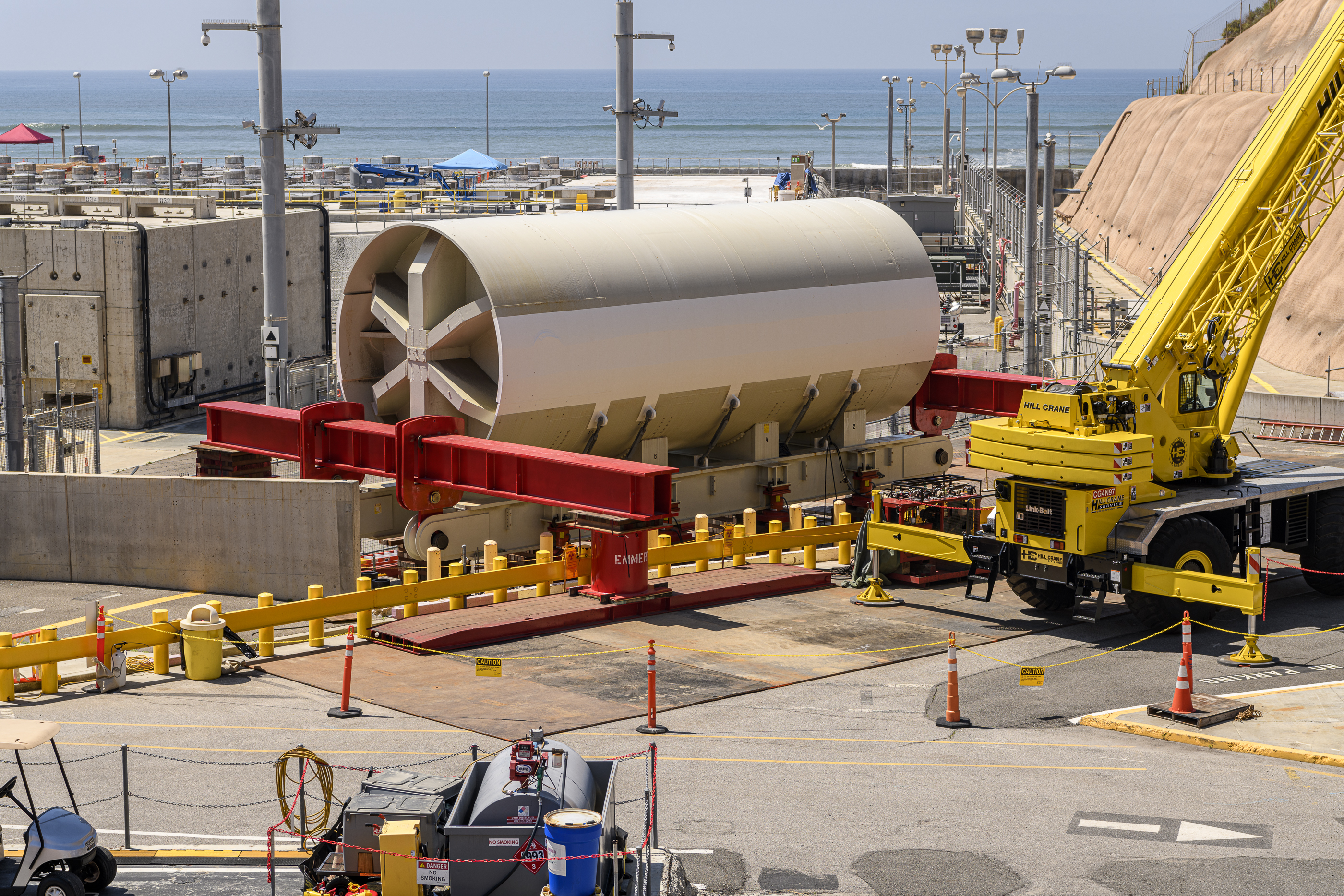 Southern California Edison this week initiated some traffic control measures outside the San Onofre Nuclear Generating Station (SONGS) as it prepares to ship out the last remaining piece of the plant’s dismantled Unit 1 reactor.

The measures will temporarily reroute any traffic to the entrance of San Onofre State Park, which is currently closed to the public amid the coronavirus pandemic. But should the state reopen the park while Edison works to relocate its 770-ton reactor pressure vessel onto its rail line nearby, surfers will still have access to the beach.

“We have not stopped access to the beach. Public access will be maintained during this work,” said Ron Pontes, Edison’s manager of environmental decommissioning strategy. “What we did need to do was close one particular egress point . . . block it off and reroute traffic another way.”

According to Edison’s traffic control plan, the unnamed road that allows motorists traveling along Old Pacific Highway to get onto Beach Club Road and the state park entrance, will be closed.

Old Pacific Highway does offer an entry to Beach Club Road through a one-way access point, but only for motorists traveling southbound, as existing traffic barriers line the median of the highway.

That unnamed road is what beachgoers typically use to exit the state park, according to John Dobken, Edison’s media relations manager for SONGS. To provide an exit, the stretch of Beach Club Road that meets with Old Pacific Highway has been converted to allow for two-way traffic.

Both Edison officials also explained that beachgoers would normally use that unnamed road to line up their cars when the state beach parking lot was full. During the work to transport the vessel, Edison is opening a section of its northernmost lot, Parking Lot 4, for visitors to use.

Transporting the reactor vessel off-site to Clive, Utah, where it will become a relic of the decommissioned power plant and buried, is the latest step in Edison’s ongoing plan to dismantle SONGS.

Since the Unit 1 reactor was retired in 1992, all of the above grade material, with the exception of the pressure vessel, has been removed off-site. The reactor pressure vessel, Edison explained, was the component used to hold the nuclear fuel when the plant was operational.

According to SCE, the package is considered low-level waste, and classified as Class A, meaning “the least hazardous of the radioactive waste classifications as defined by the (Nuclear Regulatory Commission).”

Pontes said the radiation level of the vessel is “remarkably low” and that the contact dose rate is 0.1 millirem per hour. He further noted that 0.1 millirem is 500 times less than the Department of Transportation’s limit for radioactive shipments.

“Like all activities, we focus on safety and the environment,” Pontes said. “We’re going to make sure we do everything properly and safely, so it doesn’t cause any problems. We’re very committed to that.”

Dobken said the traffic control measures will remain in place until the vessel is off-site. However, he couldn’t disclose a time frame of when that will be, leaving it open-ended for safety reasons.