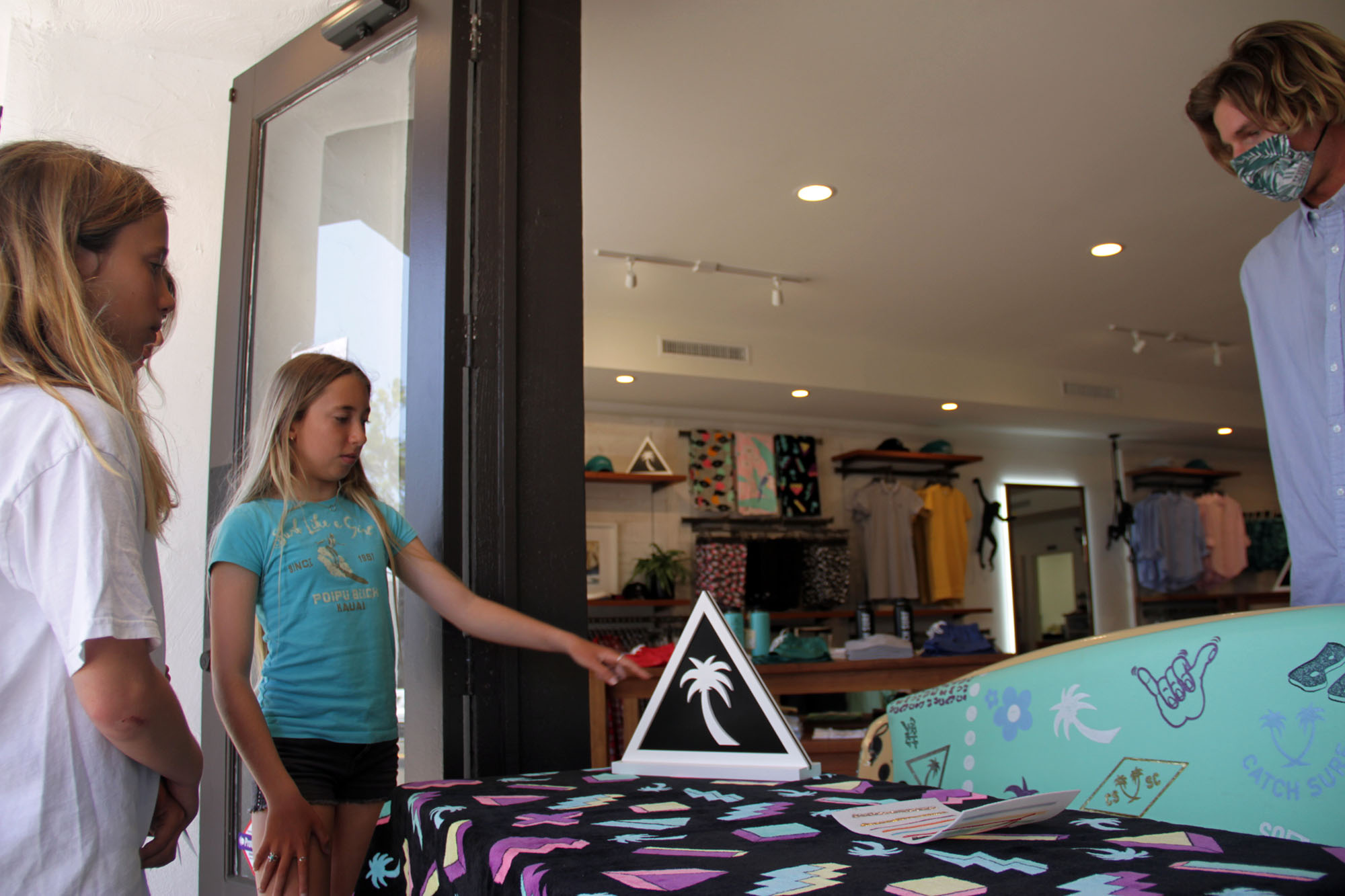 Judy Orlandella motions to the store clerk at Hobie Surf Shop to point out the item she wants to examine. She’d pick it out herself on this sunny Monday afternoon, May 11, but a table blocks the store entrance, keeping customers out while staff essentially does the shopping for them.

Then came a loud clank from inside, surprising the 53-year-old San Clemente resident, as well as the handful of other shoppers standing by for their turn.

Orlandella quickly expresses concern before she and the others break out into laughter.

“Even when I’m not inside shopping, I’m still breaking things,” an enthused Orlandella said jokingly. “Welcome to social distance shopping.”

Hobie’s setup at its San Clemente storefront on the corner of Avenida del Mar and Ola Vista represents the “new normal”—at least temporarily, many hope—for retail shops amid the ongoing public health crisis.

Under Stage 2, low-risk workplaces such as retailers, manufacturers and warehouses were permitted to reopen with certain modifications, or limitations. For retailers, that meant offering delivery and curbside pickup services similar to Hobie Surf Shop and other stores in Downtown San Clemente.

“No public is inside, so we’re containing ourselves right now by coming to them,” Hobie Manager Natalie Gamette told San Clemente Times on Monday.

“We’re wearing masks, and the majority of the public is wearing masks, and we’re sanitizing all of the surfaces,” she said, adding that customers are “not coming in and touching the payment. We’re just taking their card and using hand sanitizer.”

In a press release from the governor’s office on Friday, May 8, Newsom said he moved the state into Stage 2 because “Californians, working together, have flattened the curve.”

“Because of that work, our health data tells us that California can enter the next stage of this pandemic and gradually begin to restart portions of our economy,” Newsom said in the release.

As of Monday, May 11, California had a total of 69,382 cumulative positive coronavirus cases, with 2,847 related deaths, according to the California Department of Public Health. Roughly 3,250 people currently afflicted with the virus were being treated in a hospital, including 1,093 in intensive care units.

Per the governor’s road map, counties could move further along into Stage 2 by allowing dine-in restaurants, malls, office buildings and outdoor museums to reopen as long as they can show there have been no reported deaths related to the coronavirus and have had a rate of one case per 10,000 people within a two-week period.

Other caveats would require any county to demonstrate that it has increased testing capacity, meeting a daily minimum of 1.5 tests per 1,000 residents, and has the ability to temporarily house at least 15% of the their homeless population.

More than 1 million people in the state had been tested for the virus as of Monday. Close to 54,770 of those tested reside here in Orange County, which has a population of roughly 3.22 million.

The number of cumulative positive cases in Orange County reached 3,602 as of Tuesday, May 12, according to the Orange County Health Care Agency.

On Tuesday, the county reported 62 new cases since Monday. The county’s hospitals were treating 230 individuals who had contracted the virus, including 100 in ICUs. There was one new reported death on Tuesday, bringing the total to date at 77.

Over the first weekend of reopening, Hobie Surf Shop was “busy, busy,” as many in the community were ready to get out and shop again, Gamette emphasized.

Just up the street, Catch Surf shop, which has a similar setup to Hobie, also experienced a burst of customers this past weekend. Colton Overin, a store manager, said the good weather brought some “summertime vibes,” making it seem as if downtown was back to how it normally looks on weekends.

During his daily press briefing this past Friday, Newsom said that about 70% of the state’s economy was allowed to reopen with the modifications. Stage 2, he said, means business owners could begin to “survive and get back on their feet,” while acknowledging that the restrictions would continue to pose a struggle for many hoping to get back to where they were before the pandemic.

Touching on how being allowed to reopen has helped the business so far, Overin said it’s been good, particularly because Catch Surf, as a brand, has a loyal following of customers looking to buy surfboards—something not as easily done online.

“This is the easy way of letting them come pick it up and let them see it in person, whereas online, it’s kind of hard to buy a surfboard,” Overin said. “So coming in here is helpful.”

While those downtown businesses saw a bit of a revival on Del Mar, Lynn Castillo, the owner of the Flip Flop Shops franchise at the Outlets at San Clemente, said foot traffic at the outdoor mall was slow in the first weekend.

“Being here in the Outlets, I’m sure you can see by walking around, we’re one of the few stores open here, so as far as foot traffic goes, obviously it’s very slow,” she said, before noting that many locals who visited the store on Saturday told her “a lot of people are ready to get out, start shopping again.”

“Right now, it’s still new, so it’s slow,” she said, adding: “But I’d give it a week or so. Once things start to open up, we’ll start getting busier. It’s just a matter of maintaining our sanitation, making sure . . . everyone is wearing masks, or everyone is keeping their distance.”

The few stores currently open at the Outlets are allowing customers to walk in. Signage posted on the shops’ doors do instruct visitors to wear face coverings while encouraging social distancing.

Castillo said that assuming foot traffic picks up, she’ll be allowing only 10 customers in the store at a time. For now, with very few people coming to the store, she said social distancing hasn’t been an issue.

“Our shop is really small, so there’s not much we can really do,” she said. “Once we start getting busier, we’ll start letting in only 10 people at a time and having everyone wait outside with the markers. But we’ll cross that bridge . . .”

Newsom also noted this past Friday that just because some businesses can reopen with the limitations, it doesn’t necessarily mean the general public is ready yet to head back out to shop.

“Just because you announce that we have a variation on an opening and people can do curbside pickup and there’s a sense that things are moving again, it doesn’t mean that customers are confident and comfortable yet,” Newsom had said in a press briefing.

Castillo on Monday spoke about allaying some of those concerns customers may have by stating she and her employees will be practicing social distancing guidelines to the best of their ability while also learning how to make customers feel safe.

“The hard part for us is we are very personal people, very personal business. Helping people try on shoes, find products for them, you are in close contact with people,” she said. “So for us, it’s going to be learning what makes other people feel comfortable or learning how to help without causing any sort discomfort or being too close to people who don’t like it.”

When Orlandella visited Downtown San Clemente on Monday afternoon, she said it was her first outing for social distance shopping, with her first stop being Hobie Surf Shop.

For Orlandella, she said she’s not apprehensive about shopping as long as businesses adopt the same procedures as Hobie, where no one can physically enter the store.

“If it was people going inside, I wouldn’t go inside,” she said, adding: “I feel that it is better that we stay toeing the line and follow all of the safeguards and the protocols, and this is a great way to do it. I have no apprehensions when it comes to something like this, where they just bring it out to me, but if I was in a small space, I would not want to go in.”