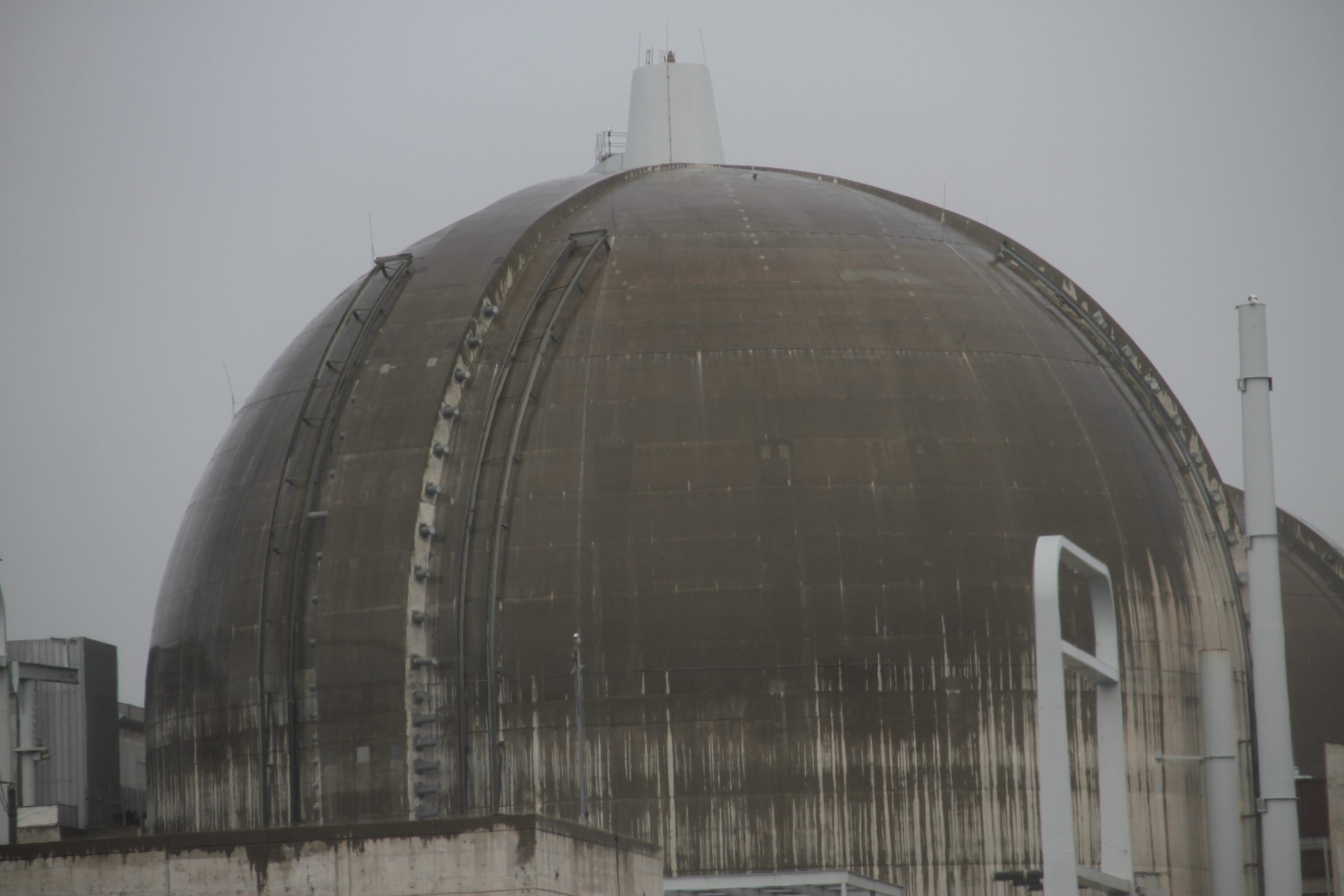 In January 2019, Rep. Mike Levin (D-CA) assembled a task force with the goal of driving solutions to move and safely store sensitive waste located at the San Onofre Nuclear Generating Station (SONGS). On Wednesday, June 24, the congressman held a press briefing to announce the task force’s report of findings and recommendations.

The task force—co-chaired by Len Hering, a retired rear admiral who served in the U.S. Navy for 30 years, and Gregory Jaczko, former chairman of the Nuclear Regulatory Commission—comprises 33 community members, councilmembers from neighboring cities, activists and scientific experts.

The SONGS Task Force was divided into two committees: the Policy Committee and the Technical Committee. The Policy Committee identified five categories of policy recommendations to move forward with:  federal legislation and regulatory oversight; state legislation and regulatory oversight; best practices; storage and aging management; and safety and handling.

While largely focusing on the safe storage of nuclear waste, the report lays outs a litany of federal and state policy recommendations to address many of the issues the task force raised related to SONGS and U.S. nuclear power plants in general.

In a prepared response from Southern California Edison, the majority owner and operator of the San Onofre plant, the company said it strongly supports legislation and appropriations to get the federal government moving on creating a permanent repository for the nation’s spent nuclear fuel.

“Rep. Mike Levin has focused his attention on this effort, and we appreciate his engagement on this complex issue,” SoCal Edison said. “Congressional action is vital to finding a solution.”

Nuclear power plants in the U.S. have been forced to store their own nuclear waste on site, as the federal government has yet to finalize and establish a permanent storage facility to contain the fuel.

The federal government’s plan to establish Yucca Mountain in Nevada as a permanent storage site has been stuck in legislative gridlock since 2010, when the Obama administration cut funding for the project. In February, President Donald Trump said he opposes the long-delayed Yucca Mountain nuclear waste repository.

“In the meantime, we remain squarely focused on safely maintaining the spent fuel while it remains on site,” Edison said in its prepared statement.

Since SONGS went offline in 2013, SoCal Edison has been transferring the plant’s spent nuclear fuel from the wet pools into its dry storage facility, or the Independent Spent Fuel Storage Installation (ISFSI), using canisters manufactured by Holtec International.

According to the company’s latest monthly progress report on June 1, 62 of the 73 planned canisters containing the spent fuel have been downloaded into the ISFSI. Edison has targeted the end-of-summer timeframe for the completion of transfer operations.

The Life of a Spent Fuel Canister

Among the recommendations in the report, the task force is calling on the Nuclear Regulatory Commission to review international practices related to fuel storage, as well conduct inspections more frequently rather than quarterly. The task force is also advocating for Congress to require that spent fuel canisters have a design life of at least 100 years.

“The current state of U.S. (spent nuclear fuel) storage at reactor sites requires long-term vision for more than 100 years,” the reports states. “Congress must work with the NRC to ensure that thousands of canisters are not approved and then stranded on-site beyond their design lifespan.”

The report notes that nuclear waste could remain radioactive for 200,000 years and should remain “isolated from humans and the environment, forever.” The report goes on to claim that the NRC’s licensing and permitting for nuclear waste storage “lacks transparent review process and critical analysis of applications that one expects of a regulator.”

SoCal Edison spokesperson John Dobken said that the Holtec canisters used at SONGS have a design life of 60 years and a service life of 100 years or more.

“Service Life may be much longer than the Design Life because of the conservatism inherent in the codes, standards, and procedures used to design, fabricate, operate, and maintain the component,” the Holtec report stated.

The SONGS Task Force report also touches on the eventuality of sea level rise and its potential impacts on Edison’s dry storage facility. The task force claims that, over time, the ISFSI could experience structural degradation as a result of a rising coastal waterline.

“Over the next 50 years, coastal hazards, including exacerbated storms, coastal erosion, sea level rise, groundwater level rise and seawater intrusion into groundwater aquifers could cause the ISFSI to be directly exposed to seawater and/or freshwater,” the report states.

Such degradation of the concrete, the report continues, could make the ISFSI more vulnerable to earthquakes and missiles, as well as impact the eventual “retrievability” of the canisters from the facility.

SoCal Edison, Dobken said, disagrees with the report’s assessment that the ISFSI’s concrete is porous to sea water and would cause it to degrade, noting that concrete is used in numerous set applications such as dams, bridges and oil rigs.

“We used high strength concrete in our design that will hold up to exposure to sea water,” Dobken told San Clemente Times in an email, adding that concrete used for the “ISFSI support foundation pad is a standard mix with relatively high compressive strength and low water-to-cement ratio which reduces permeability.”

The percentage of entrapped air in the concrete mix at the ISFSI is specified at 1.5%—a relatively low number, Dobken said, compared with other concrete mixes that have an air entrapment rate of 6%.

“Therefore, there is no basis for the statement that the concrete is ‘porous’ or would perform poorly if exposed to groundwater,” Dobken wrote. “For sea level rise, the groundwater level is not forecast to reach the bottom surface of the UMAX ISFSI support foundation pad within even the 2050 timeframe.”

Along those lines, the report states that the “retrievability” of the canisters is currently an issue, regardless of the potential seawater, as it makes the claim that SONGS lacks the ability to retrieve canisters after they’ve been placed in the ISFSI.

Citing a March 2019 report from the NRC, the task force states that “canisters lack the ability to meet the certificate of compliance requirements for inspection, monitoring, maintenance, and repair via (American Society of Mechanical Engineers)-qualified methods.”

However, task force member Ted Quinn, also a member of the SONGS Community Engagement Panel, argued that SoCal Edison has demonstrated an ability to retrieve canisters with the use of canister simulators.

“There is no legitimate technical reason to believe (multi-purpose canisters) cannot be retrieved from the storage module,” Quinn wrote as part of an “Alternative Views” section of the report.

“The canisters are retrievable. We’ve demonstrated that to the NRC per guidelines to be able to remove the lid off a storage module and then lift the canister out of the vertical ventilated module,” Dobken said.

He further noted that Edison recently conducted a demonstration using robotic technology to go into a storage module and repair any damaged canister.

Per a requirement in the California Coastal Commission’s 2015 development permit, greenlighting the construction of the ISFSI, Edison recently submitted its proposed Inspection and Maintenance Program. The program is meant to ensure that the canisters used “will remain in a physical condition sufficient to allow both on-site transfer and off-site transport.”

The CCC is expected to consider Edison’s IMP proposal during its meeting next month.

In regards to more inspections, Levin said he wants to see those conducted full time by resident inspectors “who are highly skilled and trained to understand the canisters and the spent nuclear fuel both from a regulatory standpoint, as well as a scientific standpoint.”

Dobken said SoCal Edison views the NRC’s inspections as an “integral part of the safe operations at SONGS and so we would welcome any frequency of inspections at that the NRC deems appropriate.”

The Role of State Oversight with Mostly Federal Jurisdiction

In addition to federal legislation recommendations, the report also calls for state policies and regulatory oversight. The report concludes that state agencies and leaders have not yet exercised their influence and power to regulate the storage of spent nuclear fuel.

“We have found that there are several points at which the state can intervene and incentivize safety,” the report says. “The California Public Utilities Commission holds the signing authority to the decommissioning trust fund and must exercise stronger oversight by not allowing rate increases in the decommissioning phase and requiring funding reserves from nuclear power plant owner resources to cover emergency responses while radioactive material is on site.”

Commissioners serving CPUC are appointed by the governor.

The report also recommends that the California State Legislature should require those managing nuclear power plants to use easily retrievable and monitorable storage systems.

“The state must compel nuclear power plant owners and the (Department of Energy) to develop, validate through the National Academy of Sciences, and seek NRC approval for a canister repackaging/replacement procedure,” the report states. “This process should also include study of advanced canister models with the ability to be inspected, monitored, maintained and repaired.”

In 2017, 73rd District Assemblymember Bill Brough pursued legislation (AB 1207) to create a state-led task force, comprising the California Nuclear Transport Working Group, to assess and review the efficacy of the current regulations in minimizing the risks to public health and safety resulting from the transportation of hazardous radioactive materials.

“That bill, however, was shelved by the Senate Rules committee,” Brough said. “Now, almost three years later, there is a report which suggests that state agencies should coordinate with one another more and increase engagement between state and federal agencies.”

Sen. Patricia Bates, who serves the 36th State Senate District, has been in communication with Levin’s office regarding SONGS and has authored several pieces of legislation regarding storage and decommissioning.

Senate Joint Resolution (SJR) 11 was introduced to support federal efforts to safely relocate nuclear waste. Senate Bill 465 addressed emergency preparedness, but it is no longer needed due to a voluntary agreement between SCE and five local government agencies. The stakeholders announced that they would continue their longstanding collaborative emergency preparedness activities related to SONGS. The five jurisdictions are the counties of Orange and San Diego, and the cities of San Clemente, Dana Point, and San Juan Capistrano.

“The reality is that the jurisdiction of the federal government in this area is vast,” Levin said. “I’d like to see more state engagement. I’ve been in touch with state senators as well about the report, and we’ll be sending it out. . . . It’s important that we continue to engage with the state.”

On Oct. 9, 2019, Levin met with State Sen. President Pro Tempore Toni Atkins regarding oversight of spent nuclear fuel. He added that he intends to visit Sacramento to further engage state leadership as soon as it is safe to do so.

“I think having a report and having a description of all the challenges and opportunities that we have is an important step,” Levin said.