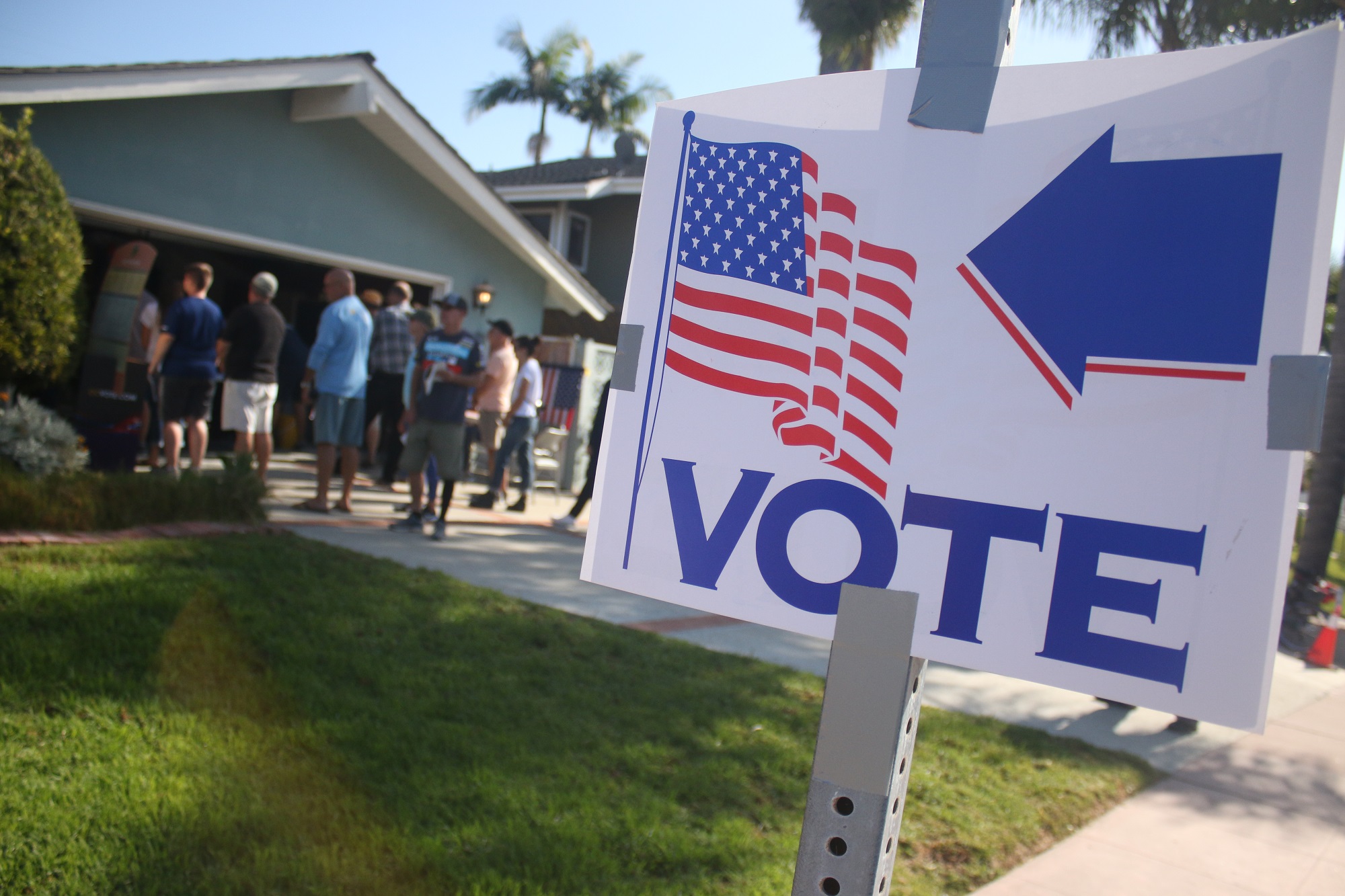 Taking part in an election forum the San Clemente Chamber of Commerce hosted Thursday, Oct. 1, candidates running for the two-year seat on the city council spoke about their approach to working with the local business community if elected to office this November.

Candidates George Gregory and Jerry Quinlan were absent from the chamber’s Special Election forum. The chamber will host its second Q&A with the General Election candidates Thursday, Oct. 8 over Zoom.

Explaining why they would be the “best candidate for business in San Clemente,” some of the candidates including Boden and Knoblock touted their experience in either running or managing a company.

Boden, who runs an energy consulting firm in San Clemente, said that as a business owner who lives in the downtown corridor, he’s seen the challenges that many businesses have faced.

“I’m somebody who recognizes the value of a pro-business mindset in our society and community, and I’d like to promote that as a councilmember as much as I can,” he said, before acknowledging his age.

“I’m obviously the youngest person on this group and I don’t know everything, but I have a very diverse and wide group of advisors who can help me to understand all the issues that I might face as a city councilmember, and I’m one who’s very thoughtful and reasonable to my approach to everything,” he said.

Knoblock touched on his background in business management, noting that he’s taught such courses for the University of Redlands and has run his own rental business and law office.

He also claimed that while working for “the largest retailer in San Clemente”—referring to his time as in-house counsel for the Outlets at San Clemente—he’s witnessed “firsthand the hostile attitude our city council has displayed toward businesses.”

“Their policy has not been one of cooperation and advocate for business, but how to oppose business and I think that needs to stop,” he said, later adding that he’s “very business-friendly and will have that attitude in aiding the chamber on business decisions.”

In a phone call with San Clemente Times on Monday, Oct. 5, Knoblock expounded on the statement, citing a legal battle that ensued between the city and the Outlets over temporary signage as an example.

SC Times’ previously reported that a settlement agreement reached in 2018 showed that the city cited the Outlets more than 900 times and more than $700,000 in fees over temporary signage violations.

During Thursday’s forum, Wu, who has sat on the city’s planning commission for the past five years, touched on his background reviewing ordinances and local businesses’ projects.

Wu said his first priority is to “hire a city manager who excels at economic development.” He also said he would work with the chamber and the San Clemente Downtown Business Association to discuss ways of attracting and developing businesses.

“For example, to reconfigure or enhance our Del Mar, our integration of Del Mar and Pier Bowl, and establish the historic district in North Beach,” he said. “And also, to encourage some more outdoor activities such as dining and street events. I will also review the design standards of our underutilized areas such as El Camino Real and the Pico corridor to increase activities along the corridors.”

Vidrine, a business owner and a nursing consultant of more than 40 years, said she’s the best candidate for local businesses because she wants to help local shops and restaurants “reopen and thrive” during the pandemic by being “informed” and leading the city “on sustained recovery, balancing risks (and) listening to the science.”

“I want to help local business adapt to a new way of working; think of new ways of doing business,” she said. “Help business maximize their potential, encourage spending to support local business, streamline and be more efficient and business friendly with permitting and planning processes while spur economic growth and increase competitiveness.”

Dahl, a former city councilmember, echoed Vidrine’s comments on the permitting process, stating that he would support streamlining the city’s permitting and planning efforts to get local businesses running. He added that he would adopt business-friendly ordinances.

“Sign issues, I think should be set aside for a little while so visibility for our local businesses can increase,” he said of the ongoing pandemic. “City council should support and has supported the Chamber of Commerce and business community over the years with different programs and policies. I would hope that the city council would return to its ability to provide financial help to the chamber and to businesses to advertise their businesses and the community.”

During the viewer-participation portion, wherein those watching the forum could submit questions, the candidates were asked how they would partner with the chamber to protect businesses during the pandemic.

Vidrine said she that she would support the appointment of a city liaison to work with the chamber on finding additional grant funding that hasn’t been utilized yet.

Wu reiterated his previous points on establishing the historic district in North Beach and integrating the downtown and Pier Bowl corridors. Furthermore, he said the city should look at ways of widening pedestrian sidewalks by either implementing a one-way street concept on Avenida Del Mar or closing the street for a day, converting downtown into a promenade.

The city and the Downtown Business Association have been working on plans to close Del Mar on Sundays for the promenade. The council on Tuesday, Oct. 6, will deliberate the city’s report on converting the street into a one-way concept.

For the duration of the city’s emergency declaration in response to the COVID-19 pandemic, the city has allowed restaurants and other businesses to operate outdoors, namely along Avenida Del Mar where several eateries have set up open-air concepts on the sidewalk and parking stalls.

Both Rush and Boden said they would like to see outdoor dining continue. For Rush, that means “as long as possible,” while for Boden it would continue on a seasonal basis, if not permanent.

Rush also proposed that the city look for any funds that may have been left over from last year’s budget to help restaurants purchase heaters to keep patrons warm as the winter months approach.

“As we see, COVID is not going away,” Rush said. “It’s staying here, lasting longer than expected, and we may have to adjust to the long term and see what other possibilities we can do with the city and just come together as a community.”

Along those same lines, Boden said the city should be engaging with the local business community more than it’s currently doing.

“I’m seeing it happen where we’re gathering input from retail and restaurant businesses in the community to find out what will help them operate more efficiently, with better business and more economic development,” Boden said. “I think we should continue doing that as much as we can, especially as the north part of town continues to develop with the Los Molinos district.”

Though crediting the city for being “fairly flexible” during the crisis, working with local restaurants on the outdoor services, Knoblock was critical of the local government for not being a “reflection of the people and the businesses that are in it.”

“Our businesses have suffered greatly, we’ve had a lot of people lose their jobs, they don’t have income, the landlords haven’t received rents, the tenants haven’t received paychecks to pay their rents, but somehow the city is unaffected,” he said, further arguing that city staff has continued to get paid.

“They get their paychecks like clockwork,” he continued. “I think the city government should reflect what the citizens are going through, and I think the city should be cranking down on its belt to respond as the businesses and citizens have had to respond, which is with extreme care and caution.”

When asked Monday whether he was suggesting the city conduct layoffs, Knoblock stressed his previous point on the city needing to tighten its belt “like everyone else,” noting that when the city’s parks were closed, staff in the Beaches, Parks and Recreation department weren’t laid off.

“When all the parks were shut down, you didn’t need all the parks and beach employees. Instead of doing layoffs, everyone continued to collect paychecks … the city staff was unaffected,” he said. “So I just think the government should tighten its belt. I’m not saying how many people it should be downsized by, but the city government should be tightening its belt like everyone else.”

Dahl, during Thursday’s forum, noted that local business “has been really depressed” because of the pandemic, as citizens are staying home to cook in lieu of dining out. Consequently, he added, those residents are saving a bit of money and putting it toward home renovation projects.

“The planning department, the building department should do everything they can to help local residents with remodels and upgrading their houses,” Dahl proposed.

The Chamber’s recording of the nearly two-hour-long forum can be found here, where you can view all the candidates’ full responses to these questions and several more.

The second forum featuring the General Election candidates is scheduled for this Thursday at 6 p.m. Registration is required at scchamber.com. Once registered, attendees will receive a Zoom registration link prior to the event. Questions can be emailed to info@scchamber.com.