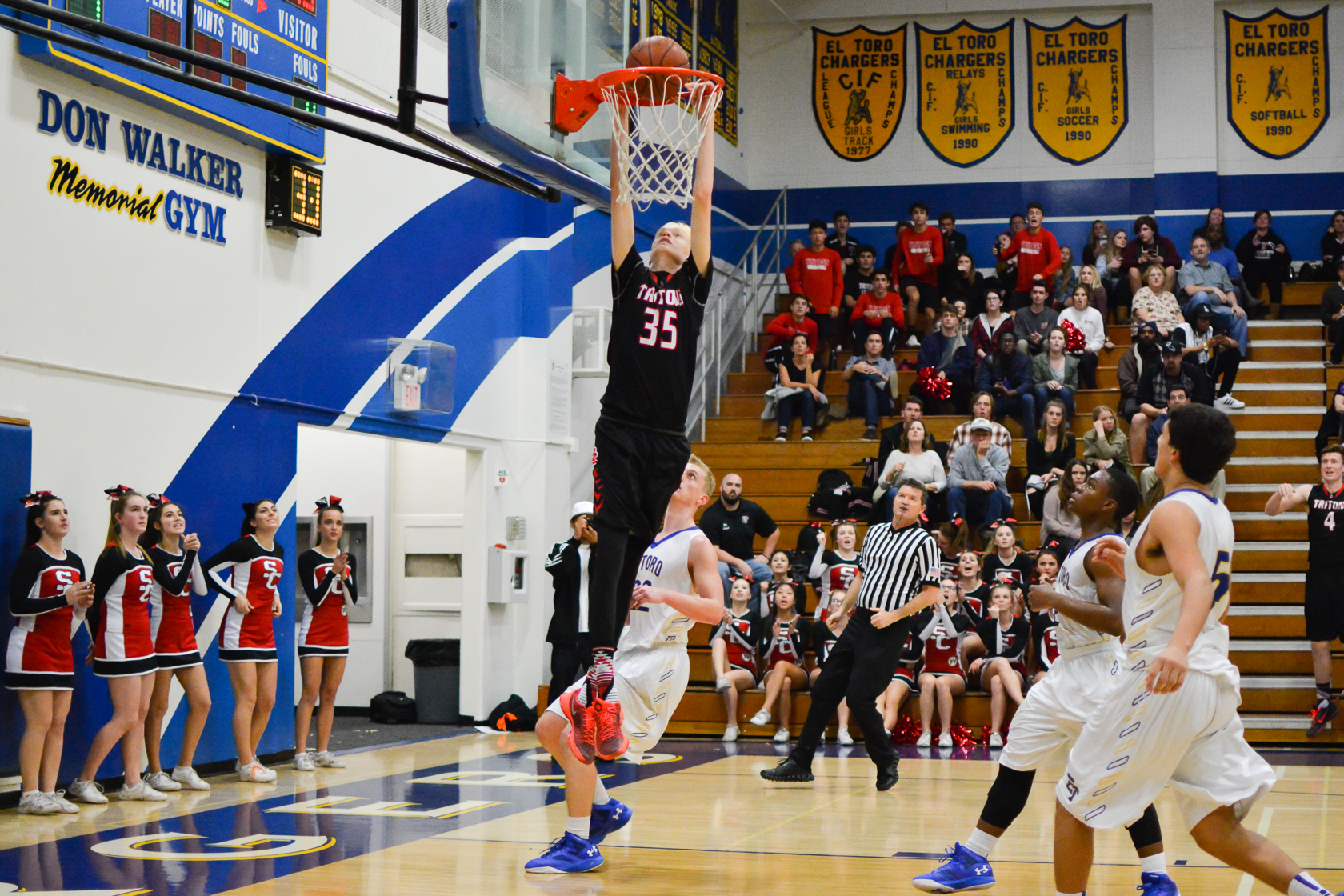 At the onset of the opening whistle of the second half, the San Clemente boys basketball team transformed into a swirling vortex of outstretched hands, shuffling feet and pure hustle on Jan. 15.

The defensive effort on display caused El Toro, the team tasked with managing the Tritons, to go ice cold when shooting from the field while San Clemente clamped down, securing a 70-57 South Coast League victory.

The Chargers (14-6, 1-1 league) led the Tritons (14-5, 3-0) by three at the halfway point but fell victim to a third quarter run during which they were outscored by the visitors 20-8 in eight minutes of play.

The driving force behind the Tritons resurgent second half was twofold. San Clemente was led by 6-foot-5-inch forward Cole Fotheringham and 6-foot-11-inch Dillon Waikle, who crashed the boards at will, pulling in a combined 10 second-half rebounds, igniting the Tritons’ second key to success, the free-flowing play of point guard Gage Shelmidine.

The Tritons won the battle of the boards in the final 16 minutes and the defense recorded eight steals, which allowed Shelmidine to push the tempo at his desired speed. After San Clemente extended its lead to nine points midway through the fourth quarter, Shelmidine patiently broke down the Chargers zone defense and found a wide open James Paterson, who scored down low, drew a shooting foul, and converted the three-point play to put the Tritons up 60-48 with just over three minutes to play.

“Gage played about as perfect of a half as you’d want from a point guard,” San Clemente head coach Marc Popovich said. “He kept finding guys for wide-open looks and that made our offense real easy.”

Fotheringham was a thorn in the Chargers side throughout the second half. The senior scored 14 points, grabbed 10 rebounds and recorded a game-high seven steals, four of which came in the second half. Fotheringham ignited the most exciting play of the Tritons third-quarter push when he corralled a pass from teammate Jake Cameron, who stole a Chargers pass on the baseline, and sent a two-handed outlet to Waikle downcourt. Waikle emphatically finished the play off with a one-handed dunk to give San Clemente a 42-40 lead they would not let go of.

Sharp 3-point shooting gave El Toro the lead in the first quarter. Four different Chargers scored 3-pointers in the first and, in the second, El Toro pushed its lead to 32-24 following a Bruce Haidrey mid-range jumper with two minutes to go before the half.

The Tritons, who came back in a similar fashion against Mission Viejo on Jan. 13, now sit alone at the top of the league standings.

“It’s a great win for us. Our guys really stepped up,” Popovich said. “After that first quarter, we weathered the storm … our defense was spectacular in the second half.”