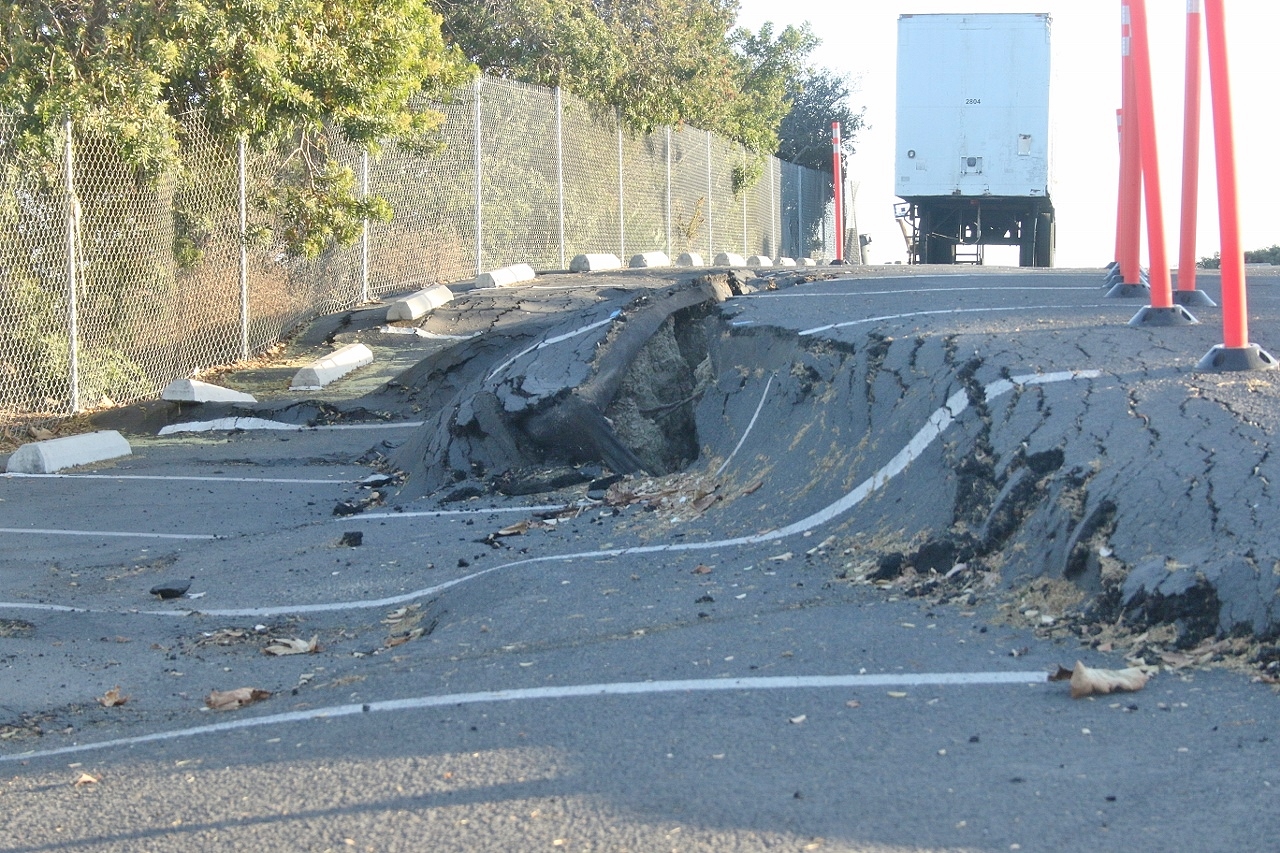 St. Andrews Parking Lot, Falling Off Cliff, to be Examined by Geologists

About 20 parking spots are unsuitable for vehicles at St. Andrews by-the-Sea United Methodist Church, and they appear to be slowly falling off the side of the bluff on which the church sits.

Mike Weichman, the chairman of the Board of Trustees for St. Andrews by-the-Sea, said the parking lot problem was noticed in April when a few cracks started to form, but since then it’s become progressively worse. The small cracks are now about a foot wide in certain areas and the surface of a significant portion of the parking lot looks as if it’s melting away from the top.

“It’s a known ancient landslide area, and now it’s become active,” Weichman said. “There are many landslide areas throughout San Clemente. And right now we’re having geotechnical firms look at the situation. We’re getting proposals to see what we can to do remedy the problem.”

St. Andrews sits just back from and above Avenida Pico and the Interstate 5 corridor where the $230 million project to widen the freeway has been going on for more than three years. Whether the cause of the landslide is due to that construction has yet to be determined, Orange County Transportation Authority (OCTA) officials said.

“There are cracks that have been there for years since the church was built about 50 years ago,” Weichman said. “The grading regulations weren’t as stringent (then) as they are now.”

Weichman said Leighton and Associates completed a report in 1988 that stated the old sanctuary wasn’t built with additional support specifications that would have been required for buildings today, but at this time the sanctuary and the adjacent buildings are not threatened by the ground movement.

“Right now we put up the delineators to block off the area, and we’re going to be putting up some fencing to better secure the area,” Weichman said, adding the church is trying to find out if it has the insurance coverage to pay for the repairs.

The church is deeded to the congregation and operated by the Board of Trustees.

“One of the geologists that I talked to said it could be attributed to the rain, and we had a wet winter, and sometimes it takes time for that water to percolate down,” Weichman said.

More information regarding the soil under the parking lot and the church are expected to be examined during the geotechnical studies.

A geotechnical investigation was performed during the design of the I-5/Pico Interchange project in 2012, said Eric Carpenter, a publications official with OCTA. The study included subsurface investigations along the retaining wall. No additional data is being collected beyond the I-5/Pico project. But no geotechnical studies specific to the church were performed prior to the construction beginning on I-5, Carpenter said.

“…Monitoring sites on the hillside immediately adjacent to project site were selected and continue to be monitored,” Carpenter said. Weichman said inclinometers are being used to track the pace and size of the slide.

Carpenter said the geotechnical consultant is reviewing available historic data related to the hillside slope immediately adjacent to the new retaining wall.
“That data may show the material type under the church,” Carpenter stated in the email. “We continue to investigate the data and to communicate with church leaders.”

Right now, the cracks have been coming closer to the church building, but the threat is only to the parking lot at this time, Weichman said.

“It is creeping in a little bit, but so far we’re safe,” Weichman said. “Our congregation’s safety is our main concern.”