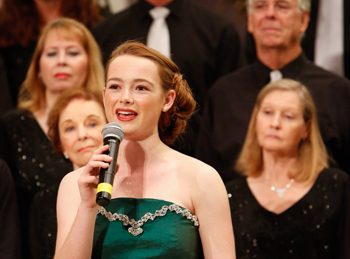 For the San Clemente Times

South Coast Singers will host Stars of Tomorrow, a singing contest among young vocalists from Orange County, on Sunday, March 4. There are 22 people selected to sing in the musical theater and classical divisions this year.

“We have some surprises planned, so this year’s show will be the most exciting and entertaining one ever,” a press release from South Coast Singers stated.

The concert takes place from 3-6 p.m. on Sunday, March 4 at Capistrano Valley High School Performing Arts Center, located at 26301 Via Escolar in Mission Viejo. Presale tickets are $15 and $20 at the door and can be ordered online for $15 a person at www.southcoastsingers.org.

One of the judges is Carl White, a San Clemente High School graduate and Tony Award-winning producer, who has a show on Broadway called The Play that Goes Wrong.

“We auditioned over 55 of the best high school vocalists in Orange County in the musical theater and classical division,” the press release stated.

Questions can be directed to sotapplication@gmail.com or call Robert Burns at 949.370.3397.