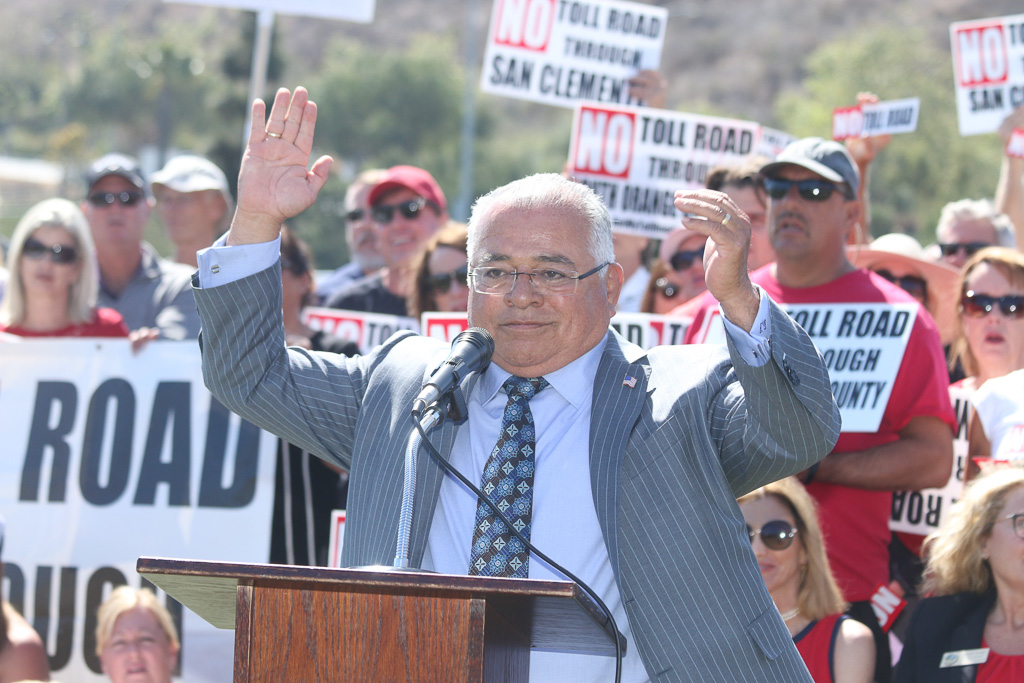 The discrepancies between the authority of the Transportation Corridor Agencies (TCA) and the city of San Clemente were evidently large enough for state Senate Transportation and Housing Committee members to deny a bill that would effectively handcuff the TCA.

Assemblymember Rocky Chávez, R-76, introduced a gut-and-amend bill toward the end of last calendar year’s legislative deadlines that reappeared in the form of AB 382, which was amended to limit the TCA from taking out bonds to pay for toll road construction and it would prohibit them from starting another similar joint powers authority (JPA) and would have given power to establish a central authority. The Orange County Transportation Authority already acts in that capacity, but The Toll Roads were established in order to bolster transportation avenues in South Orange County.

It also would have required the TCA to only collect revenue to pay down its debt to road bonds.

“AB 382 is necessary because the TCA has consistently mismanaged their duty to the public—and that’s a strong word, mismanaged,” Chávez said during the hearing. “They’re a bloated bureaucracy with a CEO who gets more than $400,000 a year. They say they’re a private-investment organization. This is hardly that. They use taxpayer money to be sustained.”

Before the day was over, the bill received three yes votes, seven no and three did not vote in the committee hearing. Had it passed, it would have moved on to the Senate Governance and Finance Committee on June 27.

“On the plus side, this was a significant step forward,” said San Clemente City Councilmember Lori Donchak after the hearing in a phone interview with San Clemente Times. “The most positive outcome was that the chairman (of the Transportation and Housing committee) offered to work collaboratively to see if we can find a solution to the problems that have caused a lot of angst. To have someone at the state level, who is chair of the Transportation and Housing Committee, offer that is acknowledgment of something that needs to be fixed at the TCA.”

Mike Kraman, the CEO of the TCA, was present at the hearing and alluded to the studies conducted and ideas that have been proposed by the TCA through public forums and meetings since at least summer of 2016, but those public gatherings were not as collaborative or inclusive as they could have been, San Clemente city officials have argued. Donchak told the OCTA board a few weeks ago that San Clemente was not involved as nearly as much as it should have been during those processes.

“The JPA allows member jurisdictions to resolve issues locally on a peer-to-peer collaborative basis,” Kraman said. “There is an I-5 (traffic) problem, and it’s going to take a solution. This (bill) takes away the TCA’s ability to fund a solution.”

Prior to the hearing, Chávez, Donchak and San Clemente resident and environmental land attorney Dan Bane hosted a press conference in Sacramento that claimed the TCA’s debt related to constructing and administering toll roads had tripled over 20 years, yet no additional toll roads had been built.

“The TCA claims AB 382 is about local control; in fact, it’s about a transportation agency that’s out of control,” Donchak said.

Committee Chairman state Sen. Jim Beall, D-15, said during the hearing that he would like to see more cooperative efforts from the local authorities.

“I’m sympathetic to the problems; however, I’m reluctant to get the state involved at this point; however I agree…to continue the dialogue between respective parties, and it seems like the stakeholders are attempting to resolve an issue at the local level,” Beall said. “I would encourage that in the interim, and if it’s not productive, I think we can consider other suggestions from a legislative standpoint.”
Because of the deadlines for legislative hearings at the state level are within days, its unlikely AB 382 will be heard again in the 2017-18 session.

Another bill introduced by Chávez, however, would stop the SR 241 extension that’s managed by the TCA at Oso Parkway, where it currently terminates. The bill was referred to the Assembly Committee on Transportation, but it hasn’t moved to scheduling since April, according to the Legislature’s website.