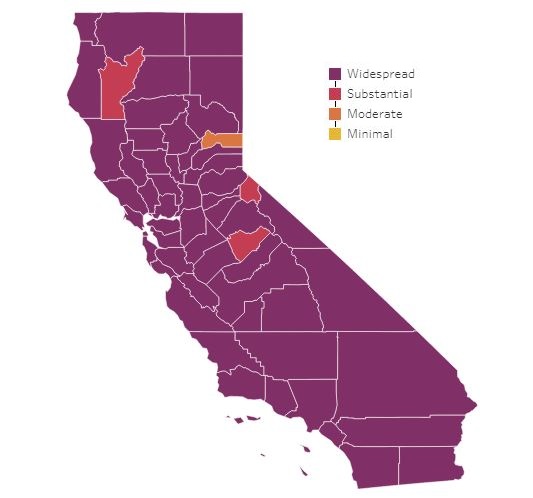 For the first time in many months, there is broad optimism about the coronavirus metrics around the state and locally, as California lifted its regional stay-at-home orders on Monday, Jan. 25 and hospitalizations and positivity rates showed continued decreases on Tuesday, Jan. 26.

As the stay-at-home orders lifted, it brought back the returned focus on the state’s four-tiered, color-coded, county-by-county coronavirus monitoring system – where Orange County remained deep in the highest-risk purple “widespread” tier, despite decent decreases in all of its metrics.

Based on the state’s projection model, Southern California is set to be at 33% ICU availability on Feb. 21, which made the region eligible to exit the order. In a video conference on Tuesday, Health and Human Services Secretary Dr. Mark Ghaly explained the state’s math (as shown in the slide below) and defended the state’s decision to lift the orders when it did.

“We did, for a period of time, over the holidays, made sure that the testing numbers were solid, that they were tracking with what we expected them to be on average, that we could account for any changes,” Dr. Ghaly said, “so that when we made a final projection… they were reliable and we could be confident in what is a fairly weighty decision for three major areas and regions of our state.”

Dr. Ghaly also defended the use of stay-at-home orders in general, which have seemingly provided results with decreases in nearly every metric across the board after reaching post-holiday peaks.

“We were concerned that without mitigation, without the stay at home order, without the hard work many Californians put in in the month of December,” Dr. Ghaly said. “We think that meaningfully decreased up to 25,000 hospital admissions, 5,000 ICU admissions, which not only protect our health system, but translate into real lives saved across our state.”

While the death rate continued to rise, the increases were much smaller than in previous weeks.

There have been 893 coronavirus-related deaths reported in Orange County in January. There were 1,875 deaths in the county over the previous 10 months, with August marking the previous one-month high reported at 376.

Tuesday also marked one year since the first two cases of COVID-19 were reported in California – one in Orange County and one in Los Angeles County. There have been 37,572 coronavirus-related deaths in California.

“I want to take a moment to share my own sadness and condolences with those families,” Dr. Ghaly said, “all those communities who’ve lost loved ones, who’ve had their world torn apart and turned over because of this disease.”

Nationally, the United States now tops 25 million coronavirus cases. There have been 421,129 deaths in the United States, and the national seven-day average testing positivity is at 9.08%, down from 10.42% last week.

The four-tiered system is the main component of the state’s Blueprint for a Safer Economy for determining in what capacity different sectors, businesses and activities can reopen safely as the COVID-19 pandemic continues.

The state reports an adjusted case rate, which is adjusted for the volume of testing. The unadjusted rate is 66.1 daily new cases per 100,000, down from 99.7 last week and from 91.3 two weeks ago.

The county saw a drop in its testing positivity, as the countywide number dipped to 12.9% from last week’s 16.7%. The metric was at 19.5% two weeks ago. The threshold for the purple tier is 8%.

The county’s health equity positivity rate was reported at 16.6%, down from last week’s 21.2% and the 24.2% of two weeks ago. The threshold for the purple tier is 8%. The health equity rate measures the testing positivity in a county’s low-income and more racially diverse neighborhoods.

To move back down to the red tier, Orange County would need to have its metrics at red levels for two consecutive weeks. If the county’s daily case rate is stable or declining but not at the next level, there would be the possibility of moving down if the testing positivity and health equity metrics meet the level for two tiers lower—that is, orange tier levels while in the purple tier.