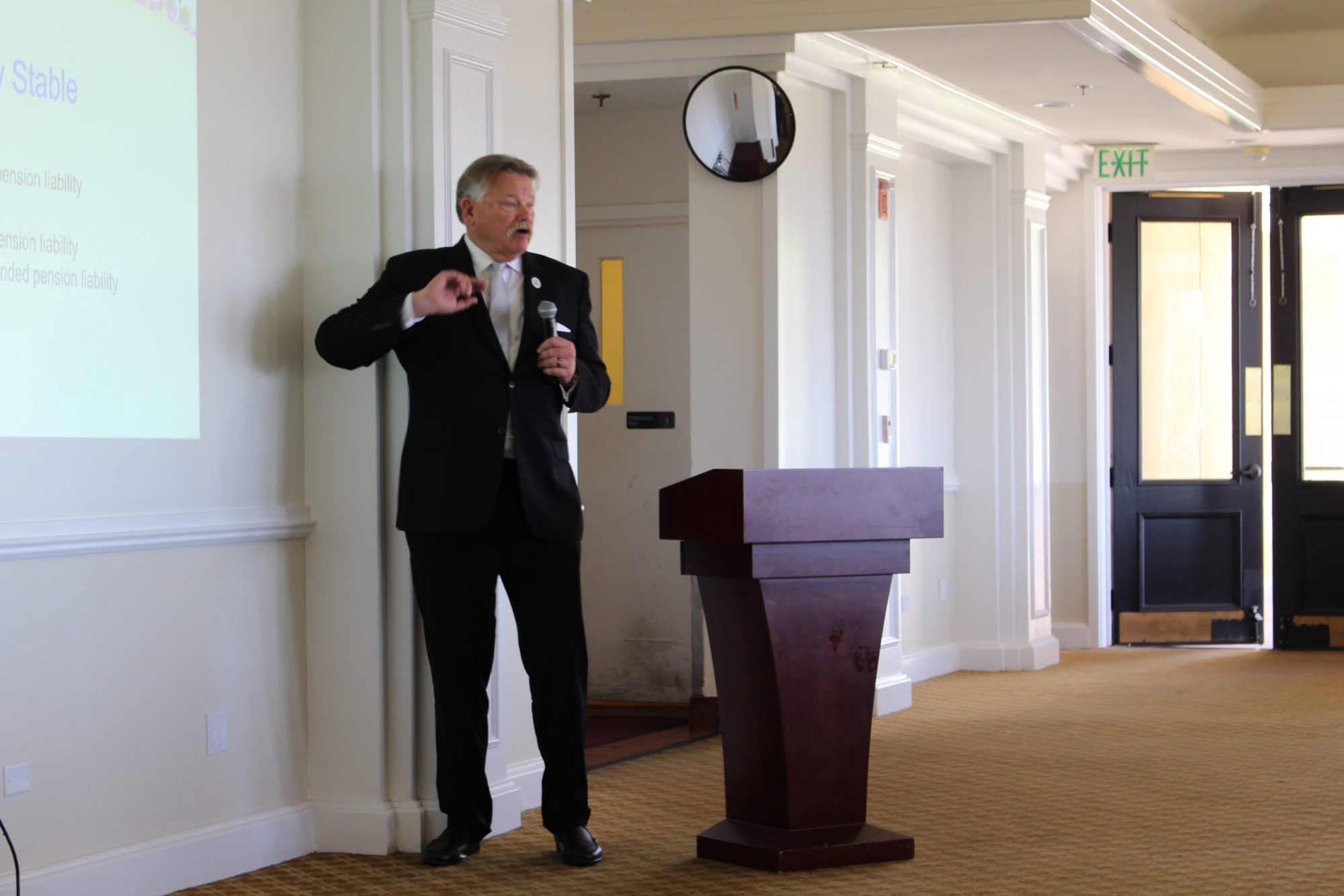 Mayor Gene James colorfully showcased San Clemente’s highlights and blemishes during the State of the City luncheon held Friday afternoon on May 6, including the city’s positive financial prospects and upcoming battles with regional entities.

His speech started by noting the 95% of residents who felt the quality of life was “good” to “excellent,” according to a 2021 poll.

“Who has ever heard of 95% of people, anywhere, to agree on anything?” James asked to laughter in the room.

He added that the city had a mission to keep the essence of what he called the “grandest city” in Orange County and the world before addressing several areas that could determine San Clemente’s future, for better or for worse.

Regarding the recent action surrounding health care in the city, which included two discussions attended by community members and various industry experts, the mayor documented a timeline of related events beginning from his time with Mayor Pro Tem Chris Duncan on the city council’s Hospital Subcommittee.

From the ultimately fruitless request for proposal issued in early 2020 to attract hospital operators to the revelation of the significant amount of hospitals in Southern California that operate in the red, James said he learned from his experiences that the city’s health care solutions have to switch away from building a hospital.

“In the six years since the (San Clemente) hospital closed, the health care industry has changed dramatically,” he added. “Health care payers no longer want to pay for inpatient care.”

Now, the city must focus on accounting for the numerous components of health care beyond hospitals in which patients prefer to stay at home and providers use digital methods to monitor their patients’ statuses, the mayor said. In his eyes, San Clemente also needs to encourage proper nutrition and exercise as a part of an emphasis on overall wellness.

“As we’re going into the future, it will be our commitment as city council—as a city—in consultation with health care professionals and administrators to bring state of the art health care to San Clemente, (such as) advanced diagnostic equipment (and) innovative preventive care,” James said.

Moving on to the financial stability aspect, he noted that the city is working towards paying down 90% of its original $49 million in unfunded pension liabilities by 2024.

San Clemente currently has a balanced budget and is projected to do so for the next four years, which James marked as a first.

“Previously we were projecting deficits and we figured out how to not have a deficit,” he said to applause. “Right now, we’re projecting surpluses four years in advance and, additionally, we have $15 million in reserves.”

He mentioned the council’s recent decision to codify a fourth firefighter to serve on fire trucks in town and that the council will look to add a second coordinator to assist Hunter.

Staffing-wise, James said the city has around 30 vacant positions but staff are working, even with less resources, to accomplish tasks at an efficient pace. One of those tasks includes updating the permit system.

“We have a software program that’s going to do that and within the next year contractors, builders, and homeowners will be able to submit their plans for permits completely online,” he explained.

The framework listed the city’s skilled city staff, positive fiscal position, safety, and quality of life as strengths, an impracticable website and campaign finance issues relating to incoming “dark money” as weaknesses, and the Sand Replenishment Project as an opportunity coming down the line.

The Transportation Corridor Agencies’ continued presence in matters such as a recent cooperative agreement regarding San Clemente’s San Mateo Creek Watershed and the possibility of being cut off from water sources due to a natural disaster are among the present threats the city must address, according to James.

Through the analysis, the mayor reiterated the point of taking a strong stance and being resilient in the face of undue, outside forces.