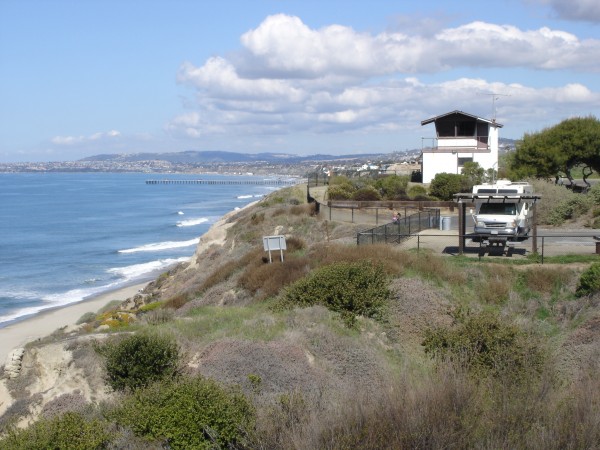 Staying Stoked: San Clemente, Dana Point Surfers Have Much to be Thankful for

A couple of years ago, standing at the top of the stairs at Riviera checking the surf, debating to myself whether or not to paddle out or go be a productive member of society, Tom Gudauskas walked up.

“Any good out there?” he asked.

“I don’t know, there’s a couple, I guess,” I not-so-enthusiastically replied.

We watched a few small but fun sets roll through. It was one of those San Clemente mornings where the ocean sparkles, the palms hang limp in a blue, windless sky and the scent of low tide hovers in the sea air. If only the waves were just a little bigger.

“What else you been up to?” I asked as we waited for the next pulse to hit the sandbar.

Tom, the father of locals and world-class pros Dane, Pat and Tanner Gudauskas, launched into a story about his latest surf trip. With wife Nancy, they’d rented an RV and driven (and surfed) most of coastal America. They’d gone from Texas, to the Florida Panhandle, and up the Eastern Seaboard before eventually heading back west and returning home to San Clemente. Tom found inspiration on the road, and when he returned home, he helped “the boys” launch what would become the Positive Vibe Warrior Foundation.

“I spent a lot of time thinking and reflecting on the power of positive thinking and what a huge impact it can have in our world,” said Tom.

Today, more than ever, Tom’s words speak to me. These are complicated, disconcerting times in which we live. We could all use a little positivity, and that probably starts by recognizing and being thankful for how good we really have it. For surfers in San Clemente, San Juan Capistrano, Capo Beach and Dana Point, there’s much to be appreciative of.

For starters, it’s a privilege to live and ride waves in one of the world’s great surf zones. There’s almost always a bump to paddle into somewhere if you’re motivated and have the right board. The water temperature rarely dips below 60 degrees. It’s a rare day when the wind blows over 10 knots. Our surf spots light up on a good northwest swell just as much as they do on a good southwest swell. And even though there may be the odd shark sighting down at San Onofre, from time to time, we don’t have to deal with critters like blue bottle jellyfish, sea lice, sea snakes, salt water crocs, stonefish, or anything else that may maim or eat you.

We’re inextricably united by the closeness of our community. Locally based philanthropic organizations like the Positive Vibe Warriors, Surfers Healing and the Surfrider Foundation are all groups that have worked tirelessly to make the world a better place. As a result, they have garnered the attention and admiration of the international surfing community and become role models for other groups. They enjoy the support of local businesses. From surfboard manufacturers, to clothing designers, to all the other movers and shakers whose job it is to keep us stoked, they’re successful entrepreneurs who understand the value of paying it forward. And thanks to the Surfing Heritage and Cultural Center in San Clemente, we have one of surfing’s coolest clubhouses.

We also owe huge thanks to those that have put in the exhausting hours to protect and preserve our incredible marine resources. Today, Trestles has been indefinitely protected from the threat of future development, most notably the toll road. Considered one of the prime surfing locations on the West Coast, a tip of the hat goes to the Surfrider Foundation and everyone that fought to make it happen. Additionally, talks are progressing between the San Onofre Foundation, the California State Park System and the U.S. Military to come to some kind of an arrangement to keep San O’ intact when the lease expires in less than five years. And who would have thought that a bunch of surfers and environmental activists could play a paramount roll in the decommissioning of a nuclear power plant? Well, they did. And while “the boobs” are a long way from disappearing, thanks to local action, they’re no longer spewing radioactive steam… and that’s a good thing.

So the next time you head down the beach and it’s a little bit crowded, or the wind’s not quite right, or the tide’s too full, think positive. Share a wave. Share your wax. High five a stranger. Enjoy a sunset. Be grateful. Be thankful. We’re lucky to live somewhere like this.