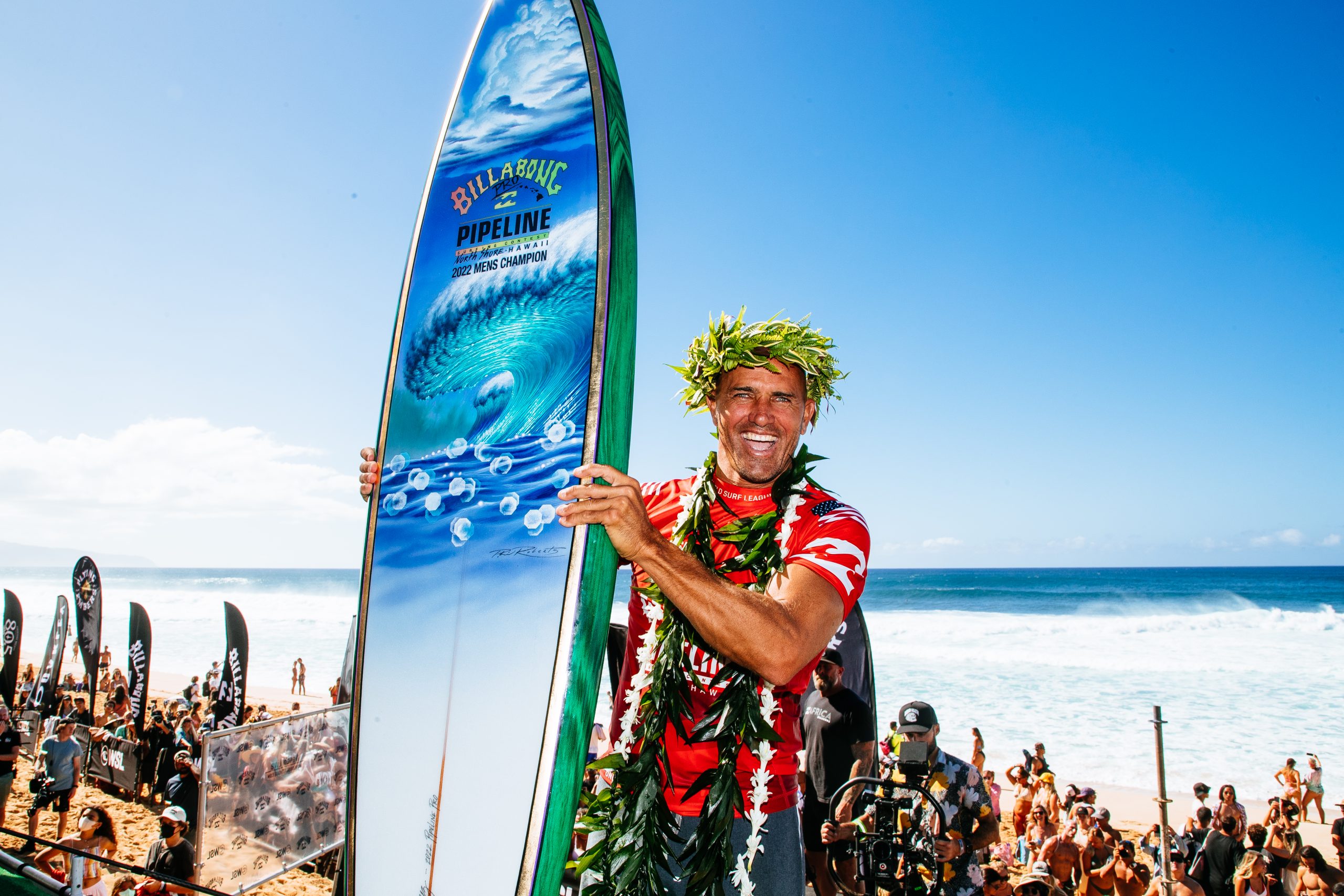 At 50 Years Young, Kelly Slater is Set to Make a Historic Run at a Record 12th World Title

Last week, 11-time world champion Kelly Slater celebrated his 50th birthday and let it be known that he is, indeed, intent on chasing a record 12th title this year.

“Yeah, I’m planning to go to all the stops this year. I think I’m just committed,” Slater revealed in a media interview released by the World Surf League.

“I know I gotta put in a lot of work between now and the end of the year,” he continued.

That’s good news for followers of the sport, and given that San Clemente is one of Slater’s adopted homes and Lowers is the site of some of his greatest competitive accomplishments, it’s especially epic for the local fans who have watched him over the years and built a relationship with him.

It was recently announced that the Rip Curl WSL Finals will return to Lower Trestles this year (as well as in 2023), which is where Slater’s professional career really took flight some 32 years ago. He now can bookend his remarkable career on the cobblestones right here in town.

“I know I gotta make that top five,” Slater said about qualifying for the WSL’s year-end Final Five. “I’d like to try to win a couple of contests this year now that I have that confidence back and the understanding of how to do that and the belief that it can happen … and getting to Trestles is—it would be—a bittersweet finish for me.”

For the past few years, Slater’s struggled with a handful of injuries, but healthy once again, his path to a potential 12th title is a realistic one.

“I haven’t really had a full year on tour in like five years,” Slater said.

The 2022 Championship Tour schedule features stops at Bells Beach in Australia, Jeffreys Bay in South Africa, G-Land in Indonesia and Teahupo’o in Tahiti. He’s won at all of them over the years. And, as noted, he’s one of the winningest surfers to ever compete at Lowers. Simply put, a healthy, focused GOAT is a dangerous GOAT.

After his command performance at the Billabong Pro Pipeline a couple weeks ago, Slater will now focus his attention on the wide-open expansive lineup of Sunset Beach and the Hurley Pro Sunset. It’s one of the few venues that Slater has dominated, which may add a little fuel to his fire.

After that, the Championship Tour will head to Portugal before a two-stop swing in Australia. There will then be a midseason cut, and the number of surfers will be reduced from 36 to 24. It’s hard to imagine that Slater, currently ranked No. 1 in the world, doesn’t make the midseason cut. If he does, the schedule really favors him with all of the above-mentioned locations.

Win, lose or draw, knowing that we get one more year to enjoy the magic of Kelly Slater is something that every surf fan can get excited about.

There’s never been a surfer like him, and we’re certainly not going to see the man’s likeness come along again anytime soon. I’m going to enjoy every minute of it.

Author’s Note for Fans of Surf-Related Cinema: Congrats to Donna Magnani and her film In Shred, which has won two prestigious awards for Best of Show and Award of Excellence from the Best Shorts Film Competition. Produced in 48 hours around San Clemente, Dana Point, Tustin, Coto de Caza and Long Beach, the movie featured The Bargain Box thrift store in San Clemente as one of the locations. The film has premiered at numerous film festivals, with more release information to come. When not working on film and TV projects herself, Magnani has been an acting coach for three decades.

Jake Howard is local surfer and freelance writer who lives in San Clemente. A former editor at Surfer Magazine, The Surfer’s Journal and ESPN, today he writes for a number of publications, including Picket Fence Media, Surfline and the World Surf League. He also works with philanthropic organizations such as the Surfing Heritage and Culture Center and the Positive Vibe Warriors Foundation