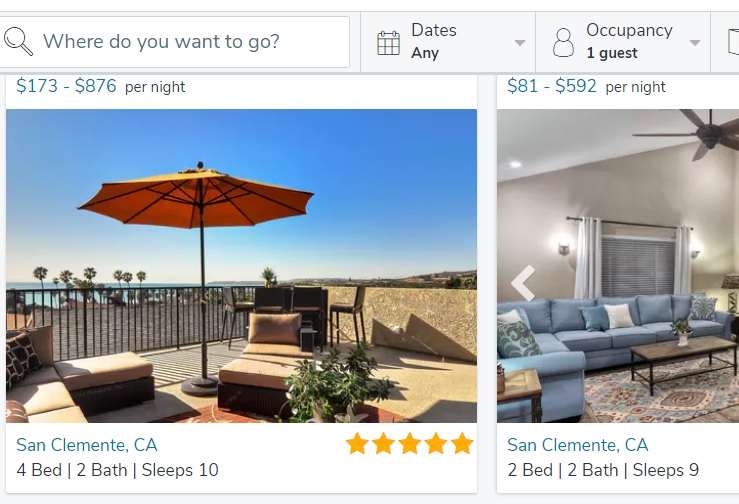 STLUs: The Compliant and the Revoked

Since San Clemente’s short-term lodging (STLU) ordinances were introduced in 2016, the veil has basically been lifted on the city’s complaint and non-compliant operators. The debate continues around the operation of such vacation destinations.

Brad den Dulk, former owner of Beachside Vacation Rentals and now with OC Furnished Rentals, recently sold his operating units to Vacasa, a vacation rental company that promotes itself as one of the largest STLU operators in San Clemente—which has been rare to do so in recent years in the city.

Kevin Knight, senior business development representative of Vacasa, said they operate 26 units within town and that the company now has a compliance department and a 24-7 reachable number in case any problems arise. He also said that before entering a community, they check with local residents to see if they have concerns, and that’s what made Beachside so attractive—den Dulk had already done most of that work for them.

Beachside was started in 2008, and den Dulk said through a network of clients they were able to market their offerings as “professional” with a high level of service.

“If you look at the history of beach towns, SLTUs have been building blocks to southern California, and San Clemente is not immune to that,” den Dulk said.

Knight said the homes have a “good neighbor” policy and that they differ in each market to conform to the local ordinances, and den Dulk said this model has worked for him. He said he housed people as famous as professional surfers at the rental locations.

When the 2016 ordinance came around, den Dulk said he fought against them during city council meetings, during which his opponents gave tearful and incendiary testimony about how STLUs had ruined their “quality of life,” a central adage from councilmembers past and present in San Clemente.

“It was a surprise to me that there were any problems,” den Dulk said. “We collected TOT (hotel tax) and provided guests in San Clemente with an experience, and people seemed stoked.”

On Tuesday, the city council revoked its latest STLU operating permit from a house at 2813 La Ventana after a guest complained of unsafe conditions during a stay in December 2017. The city’s Code Enforcement division investigated the property but only after two months of trying to contact the owners.

After its investigation concluded, the city reported one of the rooms had inadequate flooring, no windows, an illegal dividing wall had been constructed and a “septic pump” was located in the

Code Enforcement Director Adam Atamian said during the Tuesday meeting that the conditions were “dangerous” and “hazardous to human health.”

Even with the varying degrees of success with STLUs in San Clemente, den Dulk stays optimistic.

“In 10 years that I’ve been doing this, we’ve had very few (client complaints) throughout Long Beach to Carlsbad,” den Dulk said.

There is an amortization clause within the new ordinances that mandates in about seven years, STLU operations outside the approved areas, most of which are west of I-5, will have to cease operations. There are also four or five other STLUs that are slated for revocation hearings or other questioning by either the city council or planning commission.