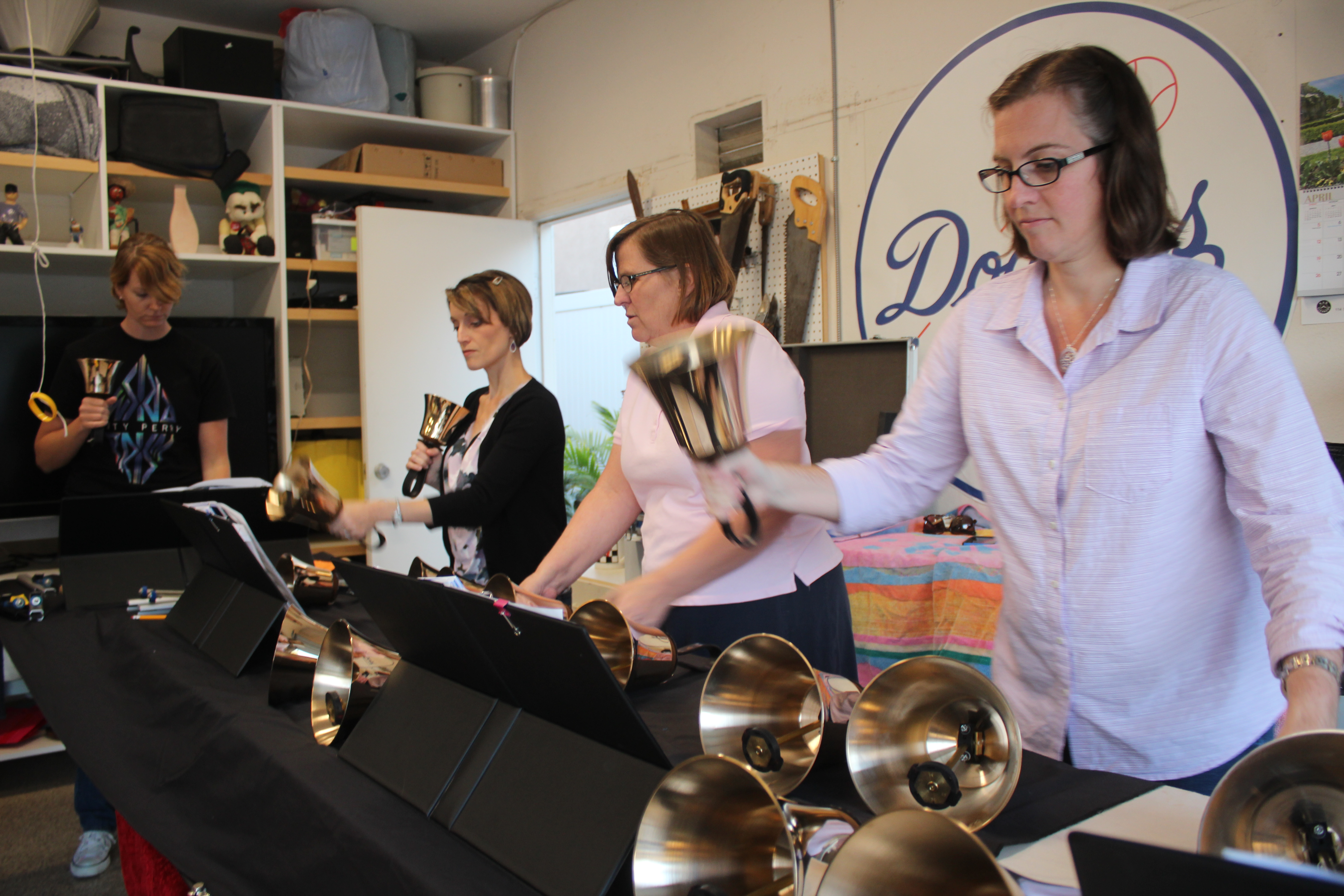 Listeners will get the opportunity to hear something as clear as a bell Sunday at St. Andrew’s-by-the-Sea Episcopal Church, 2001 Calle Frontera.

The San Clemente Community Handbell Choir and its young offshoot, the Heavy Metal Youth Handbell Choir, will present their fourth annual spring concert “Ringing on the Stairway to Heaven,” at 4 p.m. A free-will offering, with proceeds going to Family Assistance Ministries, will be the only cost.

Sharon Guilliams, one of the founders of the group, hosts weekly practices in her garage.

“I started doing this right after I graduated college,” Guilliams said. “I played in the UCI pep band (clarinet, bass clarinet and baritone saxophone) and they let alumni play, but I knew eventually they wouldn’t want some gray-haired lady in the pep band. I was going to Red Hill Lutheran Church (in Tustin) and joined their handbell choir.”

The bells produce a single tone, and are set up like keys on a piano, Guilliams explained. The challenge for those playing in the choir is that rather than being responsible for a full melody or harmony line, as those playing other instruments or singing might be, each player is responsible only for one or two notes, which means that the ringers must be able to count beats precisely.

“You’re very interdependent on one another,” Guilliams said. “You have to keep your internal rhythm going very well. If someone else messes up, you still have to keep the internal clock.”

The choir also consistently shifts to different bells on different songs, not only to account for individual strengths and weaknesses, but also to combat boredom

In addition to their own events, the choir performs at Casa Romantica, Holly Jolly Hoopla and Christmas parties for various organizations.

“We’re always looking for places to play, because we work hard,” Guilliams said.

Sabrina Vasta is the newest member of the group, coming on board a few months ago. She also serves as associate pastor of Gloria Dei Lutheran Church in Dana Point. She has been playing the bells, however, since she was a young girl.

“Once you get into, you find avenues for it,” she said. “In college and in grad school, I always found churches that had bell choirs or a school bell choir.”

Vasta said she appreciates the San Clemente group because of the variety of music being played—more than just sacred tunes—but also because it represents a number of different age groups. The level of play also sets it apart, she said, since nearly all members have a great deal of experience.

“They’ve been together, or at least the core group, for so long, which means you can play harder and harder pieces,” she said. “If you have different people joining all the time, you have to stay at a lower level because people are learning the basics. Here, people have more than that, so you can play more advanced pieces.”

“What I enjoy most is the ensemble, being all together,” Bredthauer said. “When we get it, we all get it. It’s an instrument that you play on your own, within your own part, but you’re really working as a team. If one of us is out, the melody jumps.”

The group has a mother-daughter team as well, Melissa and Katie James. Melissa had played years ago, at her old church, for about six months. Her daughter then became involved with a handbell program at her school and was in the children’s handbell choir before being invited to join the adult group.

“I decided to join because I would just be sitting here (during rehearsals) reading or knitting or whatever. So I joined as well,” Melissa said.

While both enjoy playing together, the arrangement works better, Melissa said, now that they stand apart from one another during rehearsals.

“Katie’s very gifted musically, and since I’m her Mom I think she’s a little tougher on me than she needs to be,” she said. “She was picking up parts I was missing or mistakes I was making. But it’s fun. We have a good time.”

Members of the youth group have also taken time to create care packages for FAM clients as part of the lead up to the concert.

On Life and Love After 50: The Status of Senior Dating as 2022 Approaches

Adoptable Pet of the Week: Geno