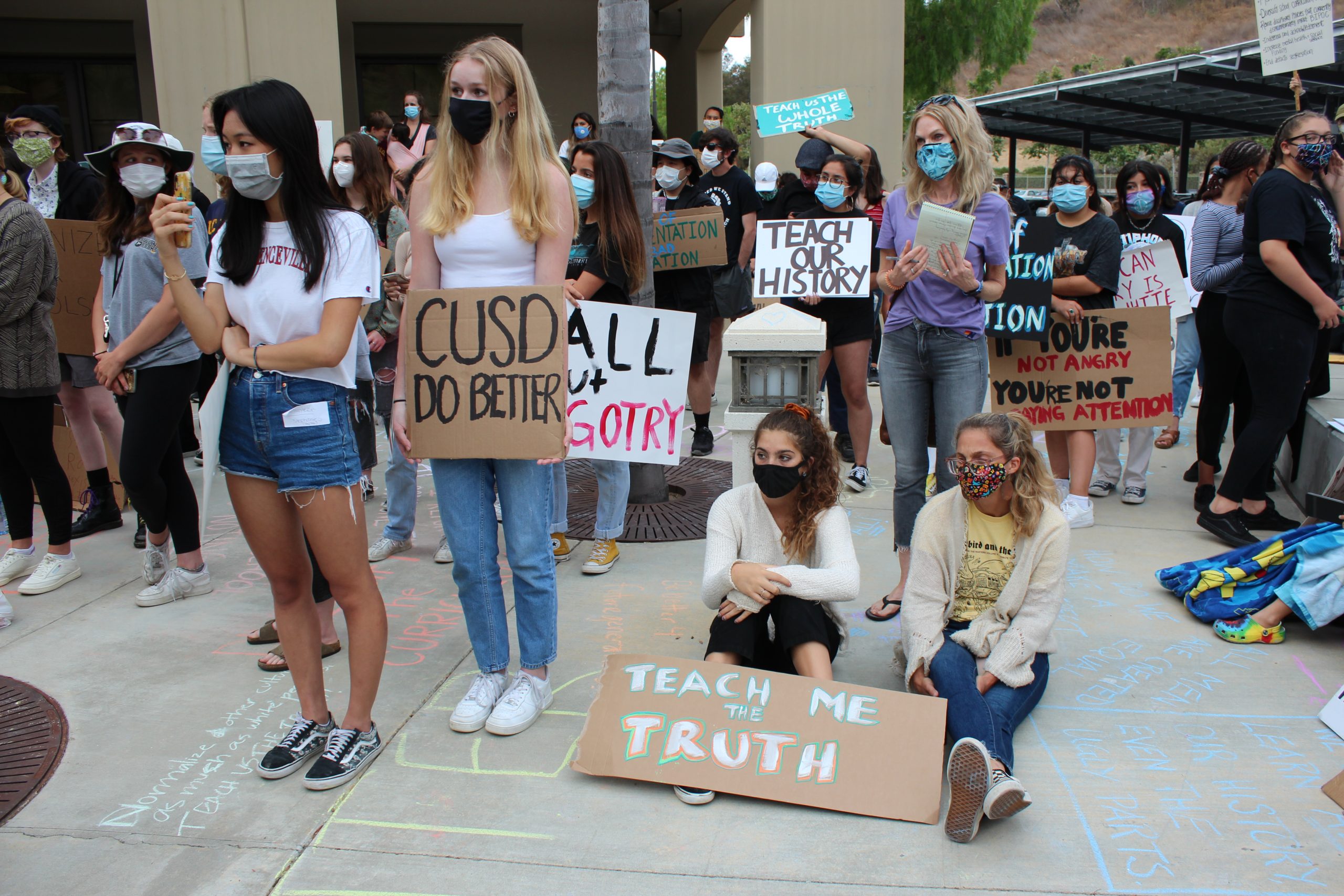 Students Protesting at CUSD Call for End to Systemic Racism

Students and parents held an anti-racism protest outside the Capistrano Unified School District (CUSD) offices on Wednesday, June 24, while the Board of Trustees were also holding a virtual meeting in which they passed a resolution condemning racial intolerance and discrimination.

During the rally, demonstrators recalled their personal experiences with racism in the school district, including discrimination and microagression. Some told stories of classrooms segregated with people of color being treated unfairly, as well as educators and officials not taking their claims seriously.

Protests against racism and police brutality have happened in South Orange County and throughout the world after George Floyd, a Black man, died in Minneapolis on Memorial Day after police officer Derek Chauvin forcibly placed a knee on Floyd’s neck for nearly nine minutes while Floyd was subdued on the pavement.

Chauvin, since fired, is charged with second-degree murder, third-degree murder and manslaughter, and charges of aiding and abetting have been brought against three other since-fired officers on the scene.

Angelie Jackson, who just graduated from San Juan Hills High School, said she was mocked for her skin tone, hair and her dad being African American throughout elementary, middle, and high school.

“People would even ask me questions, ‘Are you a slave?’ ” Jackson said. “They don’t do anything about it. When it gets reported, it just gets called bullying and is left alone.”

Parent Shereen Rahming said she had to pull her children out of school because of the racism they had encountered.

“My daughter was in class and found a Confederate flag on her desk,” Rahming said. “My daughter was on the field one day when a group of boys came up to her and started chanting, ‘Build the wall.’ I am a Central American immigrant, so of course they knew exactly where to hit with that one.”

As protesters gathered at CUSD’s headquarters in San Juan Capistrano that night, Trustees were convening their meeting, conducted via teleconference. In a unanimous vote, the board passed a resolution denouncing all acts of racism, intolerance, and unlawful discrimination.

According to the resolution, which Trustee Krista Castellanos introduced, the board is “committed to fostering an inclusive environment where every student, school employee, community member, and parent can expect to be treated with dignity and respect.”

The resolution also directed CUSD Superintendent Kirsten Vital to come back to the board in the fall with a preliminary report on the work from the district’s Cultural Proficiency Taskforce. The taskforce, which was created last year, is meant to “increase cultural awareness, justice, tolerance, inclusion, and diversity” on district campuses, operations and curricula.

Students and alumni, however, said the resolution doesn’t go far enough to handle the problem.

“This resolution is still far from an adequate response,” San Juan Hills High School alumna Olivia Fu told the board during the meeting.

Fu along with fellow alumni and students called into the virtual meeting to discuss their experiences with racism. A student-led initiative called CUSD Against Racism has formed to address racial inequality.

Fu said they have been angered by the district’s lack of support for students of color and lack of statements surrounding the ongoing “Black Lives Matter” movement. Fu suggested several ways to combat the core problem of systemic racism, including instituting anti-racist curriculum and diversifying staff.

Others who called in to comment said a wider curriculum of history and information should be taught and Hispanic, Indigenous, and Middle Eastern culture should be recognized.  Commenters also mentioned racist incidents at San Clemente High.

Trustees said they had heard their own stories and perspectives from others about race relations, and want students to feel secure.

“Thank you to all the students who came out and spoke,” Castellanos aid. “We appreciate your voice. We are listening.”

Board President Jim Reardon said the resolution frames the problem adequately and was not a solution. Reardon further said there is a systemic problem with education in California “and perhaps nationally,” and that those stakeholders should be brought into the discussion and held responsible.

Vital said there were mentioned issues with certain personnel the district would follow up on.

Editor’s Note: This story has been updated to includes additional comments from the Board of Trustees meeting.