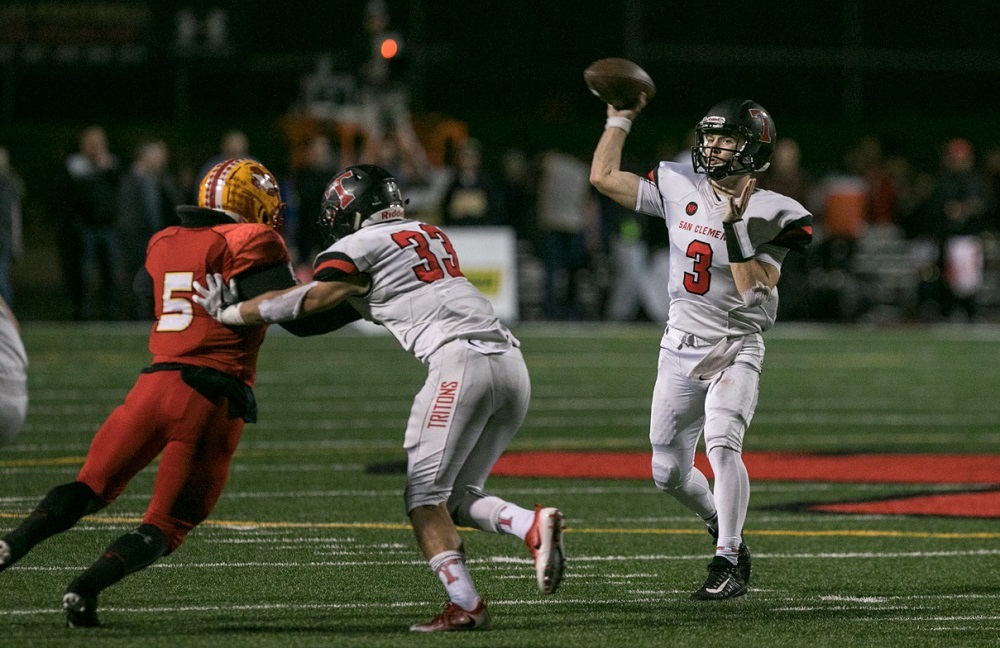 Any football coach at any level across the country will tell you the key to football is preparation.

As the sun stays up high on these longer summer days, it gives the San Clemente football team plenty of time to prepare and lay the foundations for the 2018 fall season.

“Summer is a big time to try and find out where your team chemistry is,” San Clemente coach Jaime Ortiz said. “Seeing where they fit in.”

Between now, the start of fall camp on July 30 and the Tritons’ opener against Oceanside at home on August 17, there are areas on both sides of the ball where that chemistry Ortiz spoke to will need to develop.

On offense, senior quarterback Brendan Costello will need to find that connection his new receivers. Five of the top six in pass receptions for San Clemente last season have graduated.

Costello, who recently committed to Oklahoma State, will find some names among the young call-ups as well as elevating the bond between him and senior RJ Donaldson out of the backfield and senior Jay Baggs at tight end.

Ortiz also said he’s looking for big summer improvement from sophomore running back James Bohl. Bohl made an early name as a freshman on the Tritons’ track team running on the varsity 4×100-meter relay.

San Clemente will also be finding new faces on the defensive side as nine of the top 10 in total tackles last season have graduated including linebackers Riley Croft, Shane Lockett and Aaron Frohner and top secondary players Jack Shippy and Bryce Wilson.

“Defensively, we’re looking for what new faces are going to compete,” Ortiz said. “Until you put the pads on in August, you can at least see completion.”

“I’ve gravitated a little away from seven-on-seven,” Ortiz said. “A full practice of walking through things with all the coaches and kids in 11-on-11 is as beneficial as splitting up for seven-on-seven. For the summer, it’s an opportunity to spend real time and build relationships with these kids and coaches.”