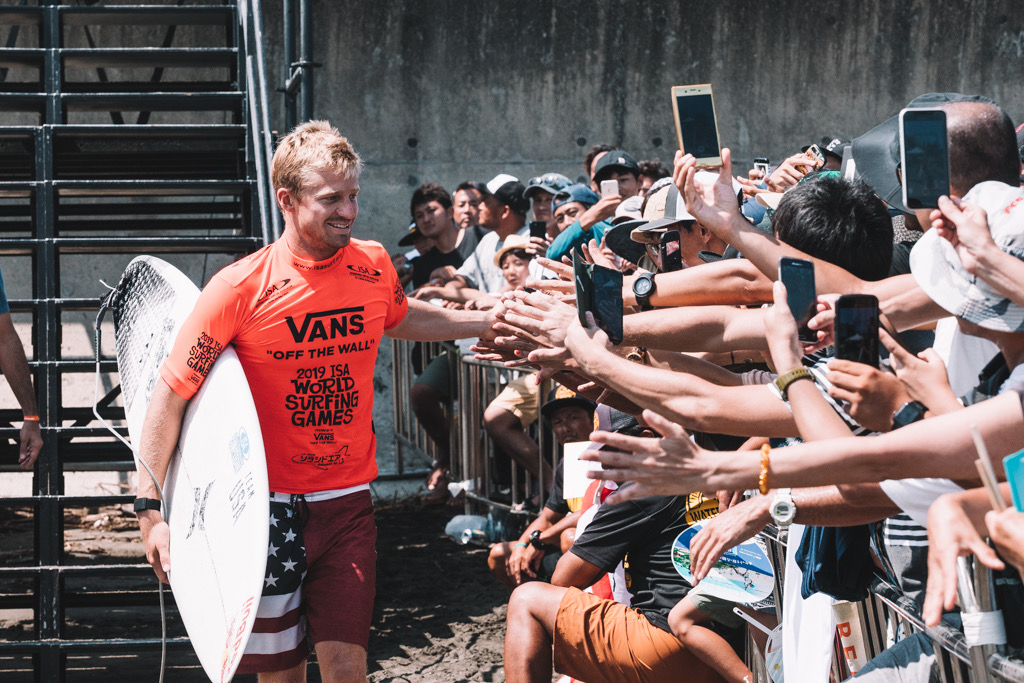 Summer’s Not Done Yet

With plenty of surf events still on the calendar, the good times keep rolling in San Clemente and Dana Point.

Just when you thought summer was over, the good times keep on rolling. With warm water and blue skies, there’s still plenty of surfy goodness to go around, and there’s no shortage of stuff happening around San Clemente and Dana Point to get stoked on.

For starters, Kolohe Andino, who’s currently ranked third in the world on the WSL’s Championship Tour, just took the silver medal at the ISA World Surfing Games in Japan. The contest was a requirement for those looking to potentially qualify for the 2020 Olympic Games in Tokyo. Andino’s performance not only got him to the podium, it also helped carry the U.S.A. National Surf Team to a silver medal in the team competition.

At the end of the WSL season in December, the top two American men and top two women will be selected for the Olympic Games. As Andino is currently ranked third, he’s the highest-rated American and appears bound for Olympic glory.

“It’s really special to represent the United States and see surfing rise to this level,” Andino said afterward. “I’m honored to be part of all of this and be able to represent my country.”

And speaking of glory, last week the Surfing Heritage and Culture Center hosted the 2019 Follow The Light Awards at the Ocean Institute in Dana Point. A grant program for aspiring surf photographers established in the memory of longtime Surfing Magazine photo editor Larry “Flame” Moore, who sadly lost his fight with cancer in 2005, the response to this year’s Follow The Light Awards was incredible. After receiving nearly 100 submissions that came in during the summer, the judging panel picked five finalists from around the world.

In the end, it was Nick Green from Tasmania who took the top honors. He was awarded a $5,000 cash prize, as well as the opportunity to shoot for Vans at the Triple Crown of Surfing on the North Shore of Oahu this winter. And as the photographer who traveled the farthest to get to the awards, he also received an opportunity from the WSL to shoot the Freshwater Pro in Lemoore, California, which takes place later this week.

“I could never have dreamed of this. The other finalists were so talented, and it’s amazing just to be part of that group. To come away with the win, I’m absolutely over the moon,” Green said after the awards.

While we’re on the subject of SHACC, next week the organization is hosting a drive-in movie night in the Dana Point Harbor. Showing the seminal 70s surf film Five Summer Stories, the show will take place in the harbor area on September 25 from 5-9 p.m. Released in 1972 by MacGillivray/Freeman Films, the movie features luminaries such as Gerry Lopez, Eddie Aikau, Sam Hawk and David Nuhuhiwa, as well as music by local band Honk.

The Dana Point Boardriders Club has something special lined up for Monday, September 23. Teaming up with the City of Dana Point and the Boys & Girls Clubs of Capistrano Valley, they’ll be hosting a surfing day for kids who don’t have the opportunities to get to the beach that often. Boys and girls ages 10 to 16 will be picked up after school by the Dana Point Trolley and taken to Doheny to experience an afternoon of riding the waves with volunteer surf instructors from the Dana Point Boardriders Club. This is the second time the club has hosted the surf day.

“I volunteered last year and will be out there again this year. It is so heartwarming to see the faces of these kids when they get on a surfboard for the first time. It reminds me of when I first learned to surf with my dad at the age of 3. He would take me out on his board with him,” said 18-year-old Ian Gottron, a member of the Dana Point Boardriders Club and former student at Dana Hills High School.

Finally, the Ohana Fest will be coming to Doheny from September 27-29. Inspired by Pearl Jam frontman Eddie Vedder, every year the list of participating acts seems to get better and better. This year, the Red Hot Chili Peppers, The Strokes, local crooner Donavon Frankenreiter will be among the featured groups.

So, there you go, if you surf and aren’t ready to let go of summer yet, there’s plenty of stuff to get involved in over the next week or two. If we don’t see you in the water, hopefully, we’ll see you on the sand.