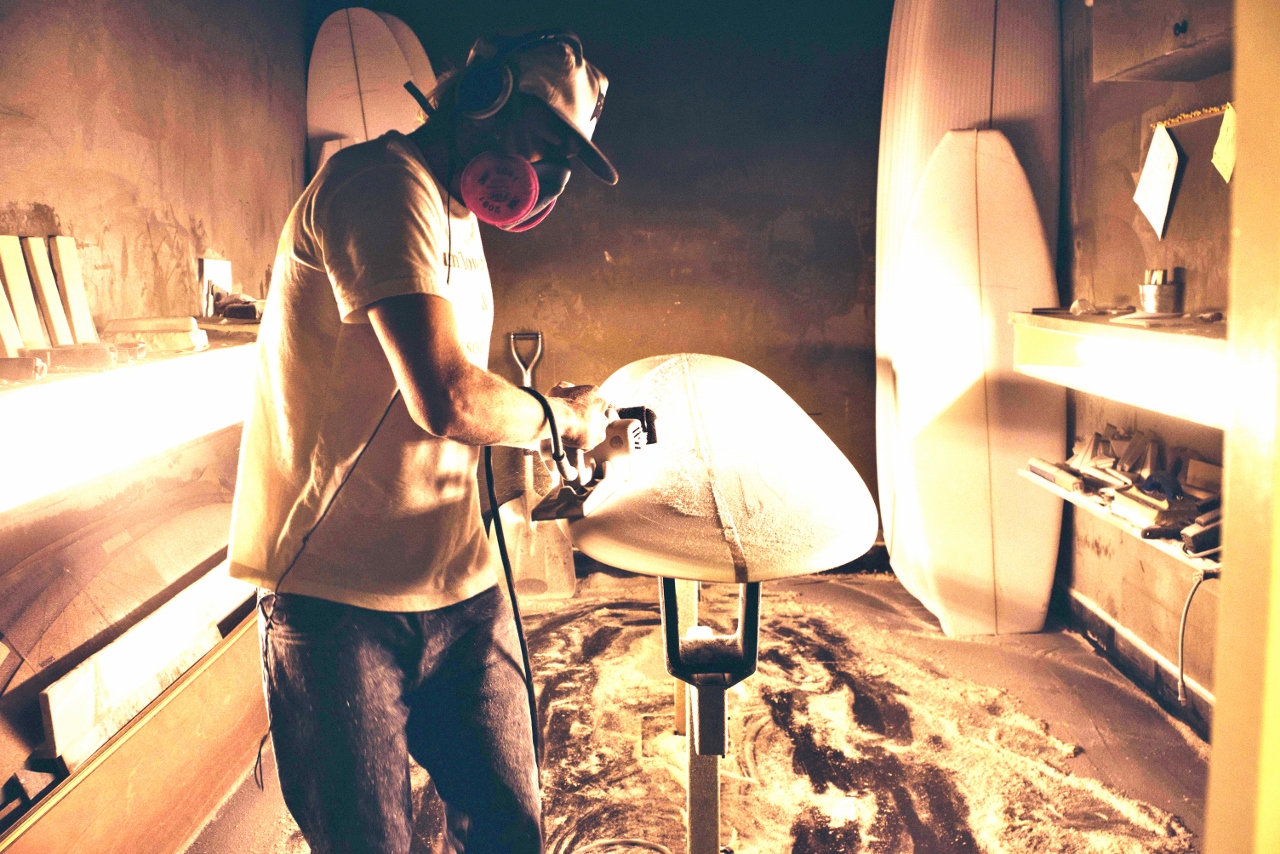 Support Your Local Shaper: Saying No to Overseas Imports and Yes to Local Surfboard Builders

Sitting in the water at T Street, a friend remarked, “There sure are a lot of guys on Wavestorms out here… some of them look like they can even surf.”

A couple days later, out at Old Man’s, I noticed the same thing—a lot of dudes floundering around on Wavestorms.

But before I digress, a little background information. The Wavestorm is an 8-foot, soft, foam surfboard sold at Costco for $100 (although it comes in other sizes). In 2015, the company that produces the board, AGIT Global, sold an estimated 100,000 boards. Started in 2007 by a former hockey player from Canada named Matt Zilinskas and his partner John Yeh, a Taiwanese businessman, Zilinskas originally landed in California in the late ’90s managing the Boogie Board brand for the toy company Wham-O. He soon teamed up with Yeh, and the Wavestorm was born shortly thereafter. The boards are currently produced overseas in a 75,000-square-foot factory.

The blue and white design is now ubiquitous with summertime as they’ve become the preferred boards for beginners. They’re affordable. They’re durable. They paddle and catch waves well enough. It’s hard to hurt yourself on one. All well and good, but here’s the rub: Wavestorms have been and continue to be a blight on local surf communities around the country.

On an economic level, the boards are largely to blame for a downturn in the custom surfboard business, according to several craft producers.

“I always hear people saying it gets people into surfing, so it will translate into sales for custom boards, but that just hasn’t proven to be the case. We’ll have to keep our fingers crossed,” said Cole Simler, who’s been whittling boards in the San Clemente surf ghetto for decades. “I think people who really surf, and surf well, are always going to buy custom surfboards.”

Living in South Orange County, we have the good fortune of having access to some of the best surfboard builders and craftsmen in the world. The list is too long to name here, but from Dana Point to San Clemente there are dozens of highly talented men and women making surfboards. The industry was literally born in our backyard. But today, these businesses have been severely impacted by this wholesale surfboard business.

“I think it is important to support local shapers just like it’s important to support local businesses,” agreed Tyler Warren, who’s one of the bright, emerging shaping talents in the area. “Would you rather be seen bobbing around on a Chinese pop-out board or a Costco Wavestorm foamie, or a sweet Timmy Patterson or Cordell (Miller) that was made by people in the area?”

Globalization is a hot topic these days and it affects surfboards just the same as so many other industries. It’s cheaper and perhaps more efficient to build boards in China or Taiwan, but it doesn’t mean it’s good for surfing. Guys like Simler and Warren have spent years and years honing their craft. Warren, for example, served as an understudy of the late Terry Martin, who spent over half a century shaping for Hobie Surfboards. The knowledge and skills are passed down through the generations, and by shipping them overseas, that continuum is interrupted. Over time, that could make it a challenge to get a well-designed, high-performing, custom board.

“No matter what ability level you are, whether a beginner or an expert, you would think you would want to give yourself the opportunity to get better at surfing,” continued Simler. “I do understand that riding those soft boards can be fun just to screw around on, but it is baffling to me that people would want to deal with the lack of performance each and every time they go surf.”

For guys like Simler, Warren, Patterson, Miller, Terry Senate, Bill Stewart, Jed Noll, the Boehne family, and so many others, there is an international market for the boards they make, but at the end of the day, their bread and butter is what’s happening in local waters. They depend on custom surfboard orders and regional retail shops to put food on the table and send their kids to school. You could walk into any of their shops right now and they’d be more than happy to make you a board… with your name on the stringer.

“My house is filled with tons of Chinese stuff from Costco and Walmart. I’m overloaded,” said Scott Bass, the founder and director of the Boardroom, a semi-annual surfboard show based in San Diego. “But if I can avoid another cheap widget I certainly will. I think many Americans gravitate toward hand-crafted stuff: guitars, art, cabinets, surfboards. It’s why I stop at farmers’ markets. I get a chance to talk to the character growing my oranges or producing my honey. I like that. That’s kind of cool. It’s authentic. It doesn’t mean a Wavestorm is bad, but it does mean it’s a cheap widget.”