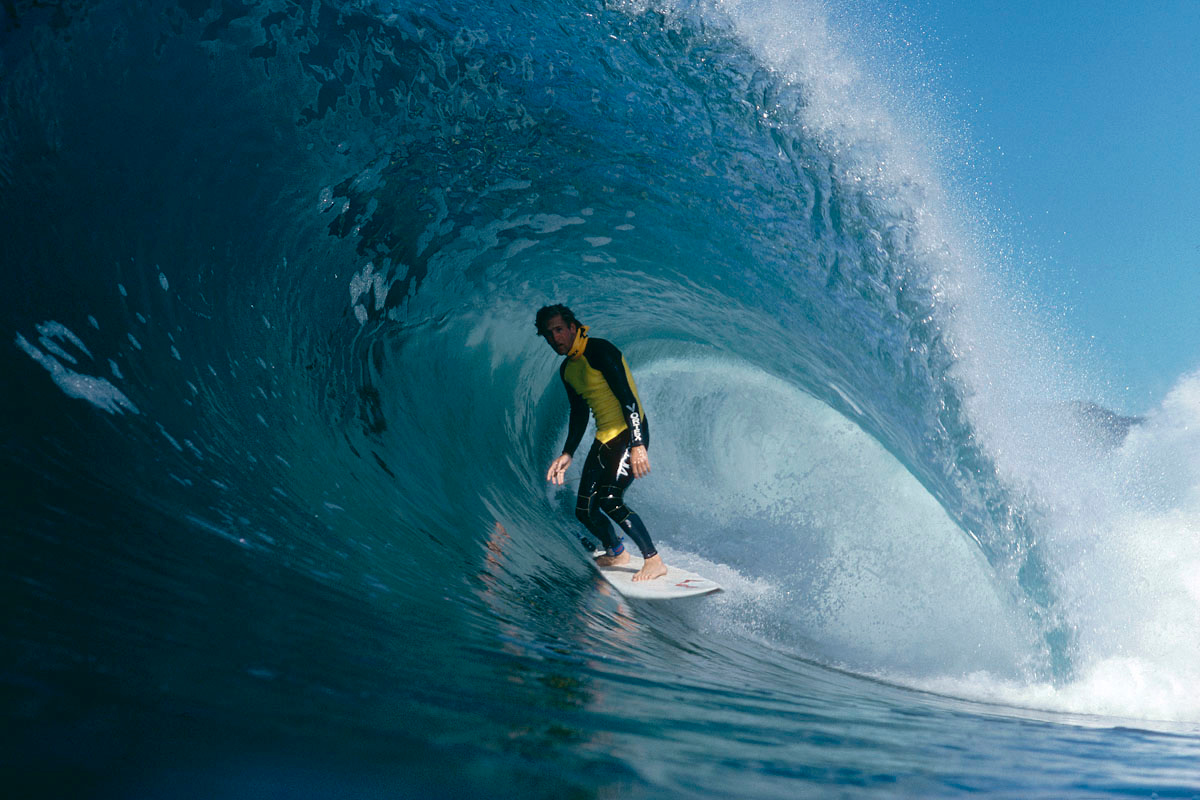 It’s a tough slog these days for aspiring surf photographers. For decades, surf magazines provided photogs with an outlet for their work to be seen. There were a handful of photogs who made a career out of traveling the world and shooting the most iconic surfers and lineups. But as print mags have slowly gone the way of the dodo, there’s less opportunity than ever for ambitious would-be photographers to ply their trade.

To help give emerging talent a nudge forward, the Surfing Heritage and Culture Center (SHACC) has announced the return of the Follow the Light (FTL) grant program in the name of the late Larry “Flame” Moore.

In 2005, Flame, a legendary surf photographer who made a name for himself capturing the burgeoning talent at Salt Creek in the ’80s and ’90s, succumbed to a battle with cancer. A 30-year photo editor for SURFING Magazine, Flame helped launch the surf careers of everyone from Pat O’Connell to Christian Fletcher. He was also among the first explorers to figure out and document the potential of big-wave break Cortes Bank, 100 miles off the Dana Point coast. But more than that, Flame also took the time to foster talented young photographers.

After Flame’s passing, a group of friends and family formed the Follow the Light Foundation to ensure that Flame’s legacy of passionately supporting the next generation of surf photographers continued. FTL dedicated itself to honoring this legacy through an annual grant program that also included an awards ceremony highlighting the work of each of the five finalists.

Running from 2006 to 2015, FTL brought together the community of surf media and industry professionals, athletes and friends to recognize each year’s winner. Past honorees include some of today’s most important and talented photographers. Follow the Light has been a catalyst for the careers of modern masters such as Chris Burkard, Todd Glaser, Ray Collins and Morgan Maassen.

“It’s not easy to be a surf photographer today, but it’s vitally important to the sport and culture that it continues to be documented and celebrated through photography,” said Shawn Parkin, photo editor of The Surfer’s Journal and former Follow the Light grant winner. “It’s exciting to see Follow the Light come back as a platform for young photographers to showcase their work and be recognized for it.”

Recognizing that the arena in which surf photographers work today has changed dramatically since Flame was at the helm of SURFING Magazine, the FTL committee rededicated itself to helping aspiring lens-men and lens-women get their start in the business and develop the tools and relationships necessary to take their careers to the next level.

“It’s so special to see FTL come back this way” said Celeste Moureaux, Flame’s sister and one of the founders of FTL. “The amount of love and positive energy we’re feeling is incredible, and I know it really would have touched Larry to see all of the passion for keeping his vision going. He loved fostering talent, and it’s so great to see his legacy alive and well.”

In keeping with the tradition of FTL, the grant winner will receive a minimum $5,000 award and a working opportunity with supporting brand sponsors. The global competition is open to anyone under the age of 25, with the winner selected from a pool of five finalists.

“It’s an incredible honor for SHACC to be bringing back Follow the Light” said FTL committee chair Don Meek. “Flame was responsible for launching so many careers and supporting so many talented young photographers. We’re beyond stoked to continue his legacy.”

The entry window will open on March 19, and the submission deadline is April 26. The FTL event and awards ceremony will be held Sept. 12 at the Monarch Beach Resort in Dana Point.

Program details, including selection criteria and the submission process, will be available on Friday, March 1.