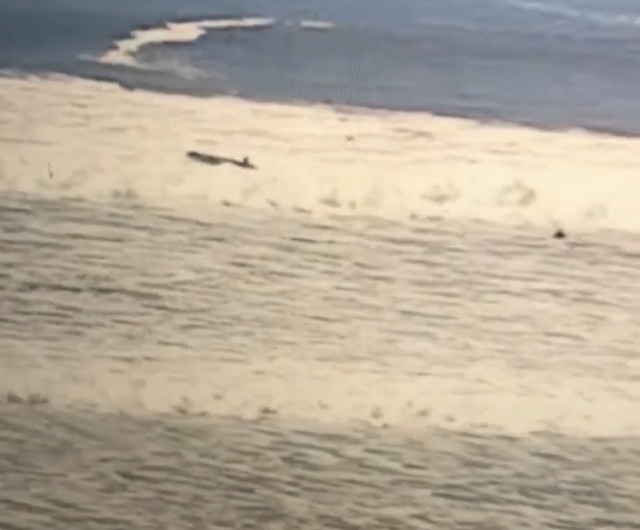 But for a couple of surfers, the chance to surf a new swell rolling into Trestles that would’ve offered 4-6 foot waves was too tempting to pass up. So they jumped into a boat on Wednesday, April 8, and set course for Trestles where they attempted to work around the closure.

For a short while the plan had worked, as the pair of surfers reportedly had unimpeded access to the world-famous surf break for about a half an hour that morning while lifeguards could only stand by, unamused.

However, their luck soon ran out as the strong waves capsized the boat, which the surfers believed had been anchored, putting an end to their fun.

“The boat’s anchor got loose and the boat washed onto shore,” Jorge Moreno, a public information officer for California state parks office, told San Clemente Times in an email.

Moreno added that neither of the individuals suffered injuries and that the vessel operator was issued a citation for trespassing at the closed state beach.

Live surf-cam footage from surfline.com captured the surfers’ scheme being thwarted by the ocean. In the viral video, that’s been widely circulated among the local surf community, the boat can be seen washing up toward the shore after being caught in a strong wave.

Tom Cozad, a surfer from Newport Beach, shared the snippet of the footage to his Instagram page with the caption: “Maybe taking a boat into Lowers isn’t such a good idea.”

Maybe taking a boat into Lowers isn’t such a good idea. Was checking cam, 3 guys out, boat was out of frame, set came in, then upside down boat came into frame with about 6 then in Line-up. Lifeguards paddled out to help them. Eventually boat washed up on shore. Check Surfline cam rewind. Around 11:50am

Cozad continued to write that he was watching the live feed of the Surfline cam when he noticed the capsized boat coming into the frame while lifeguards paddled out to help the surfers at around 11:50 a.m.

While it’s unclear who exactly the surfers are at this time, Dana Point resident Don Abadie is claiming responsibility for the incident.

In a post to his public Instagram page on Thursday morning, where he shared a photo of a boat on the shore, Abadie wrote: “Learned a valuable lesson yesterday don’t act On impulse [sic].” He goes on to state that in addition to losing his boat, he also lost his car keys, electronics and “a little bit of my dignity.”

Learned a valuable lesson yesterday don’t act On impulse. Lost a boat car keys a bunch of electronics and a little bit of my dignity. When the beaches are closed they’re closed you can’t even enter the water from boat or ski. The lifeguards and Park Rangers were very helpful yesterday even though I was the one being a dumbass I got to give props to them. @jonathanwaynefreeman

“When the beaches are closed they’re closed you can’t even enter the water from boat or ski,” he added, before using an expletive to describe himself and crediting the lifeguards and the park rangers for being helpful.

“I got to give props to them,” he concluded.

Abadie has also shared the Surfline cam footage through his Instagram stories.

Abadie could not immediately be reached for comment as of this posting.