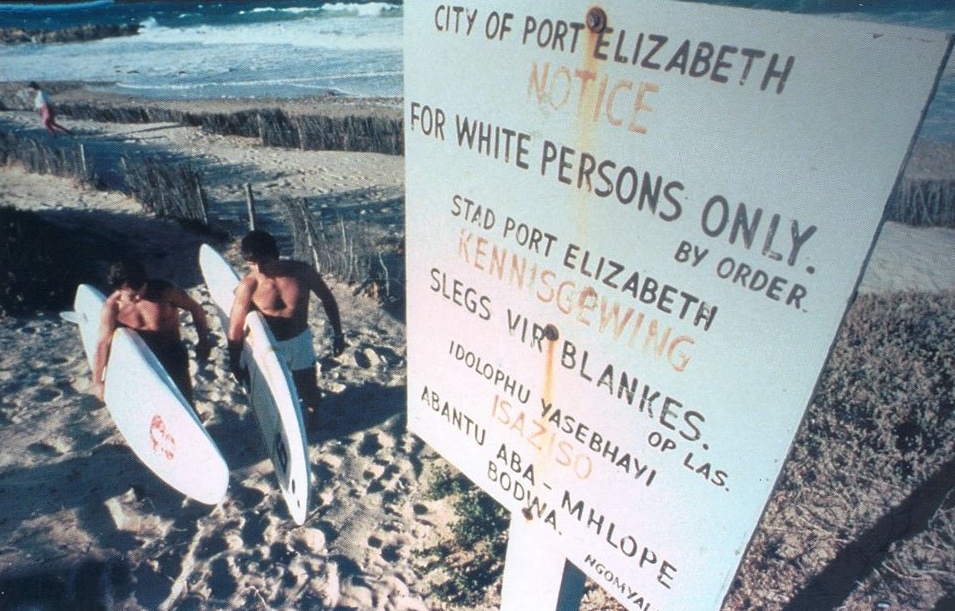 Surfing, Politics and the Struggle for Freedom in South Africa

Keep politics out of surfing. It’s a phrase that floats around the surf community at large.

The sentiment is that surfing should be a place to escape the craziness of life on terra firma—a place where, as Surfer magazine founder John Severson wrote, “a surfer can be alone with his thoughts.”

Of course, Severson also sold photos of President Nixon on the beach at Cotton’s Point to LIFE magazine.

Living free and easy ain’t always so easy. I was reminded of this over the past several months while preparing for the new exhibit on the rise of African surf culture that’s currently on display at the Surfing Heritage and Culture Center in San Clemente.

In April 1985, Australian surfer Tom Carroll announced that he planned to boycott the upcoming South African leg of the world tour. Having just won his second world title, Carroll’s breaking news at Bells Beach quickly reverberated around the surfing cosmos.

Meanwhile, Santa Barbara’s Tom Curren, who had surfed in South Africa in the early 1980s as part of the U.S. national team, also joined the cause when the African National Congress (ANC) called for foreign athletes to boycott events.

“I really enjoyed going to South Africa and surfing the waves there, (but) there was a bigger moral issue … I felt good about my decision … regardless of how it would affect my ratings,” he explained years later.

The two were also joined by Aussie Cheyne Horan, who boycotted the events in 1985, but returned the next year with “Free Mandela” written on his board.

South African Martin Potter also decided to take a hard pass on the events in his homeland. Surfing under the flag of the United Kingdom at the time, he was more directly exposed to what was happening in South Africa.

“Potter brought the 1985 anti-apartheid boycott into sharper focus,” writes Matt Warshaw in his book The History of Surfing.

“It was fine for Carroll to say his stance on South Africa came from ‘the realization that things weren’t getting any better for Blacks.’ When Potter said he’d personally watched Black surfers get arrested for riding waves on Durban’s whites-only beaches—the point was that much stronger,” Warshaw continues.

And while there’s no comparison to the oppression that Black South Africans were living under, all four surfers did pay a price for their shared political stance. They missed out on valuable world tour points, Carroll ended a sponsorship deal with a South Africa-based company, while Potter lost friends and had his life threatened.

Ian Cairns, who was executive director of the ASP at the time (the precursor to the WSL) stated, “We don’t have a political policy.”

But by ’89, the boycott had gained traction, as 25 of the 30 top-ranked surfers avoided South African competitions. In February 1990, Nelson Mandela was freed from prison, and in 1994, a new government, led by Nelson Mandela, ultimately ended the apartheid system.

So, yes, sure, you can keep politics out of your surfing experience, but at the end of the day, it’s a much stronger sport, culture and lifestyle when we all come together as a force for positive change.

Surfing lost a true innovator with the passing of Joe Crimo.

Originally from East Los Angeles, Crimo found sanctuary in the waters around San Clemente. By the mid-’90s, he was one of the most influential aerial surfers, infusing skate-inspired tricks into what he was doing in the water.

Starring in some of the earliest Lost films, he helped set the stage for what some of the best surfers in the world are doing today.

Crimo had a heart of gold, loved his friends and family, and he was still surfing up until the end. He was 47 years old.