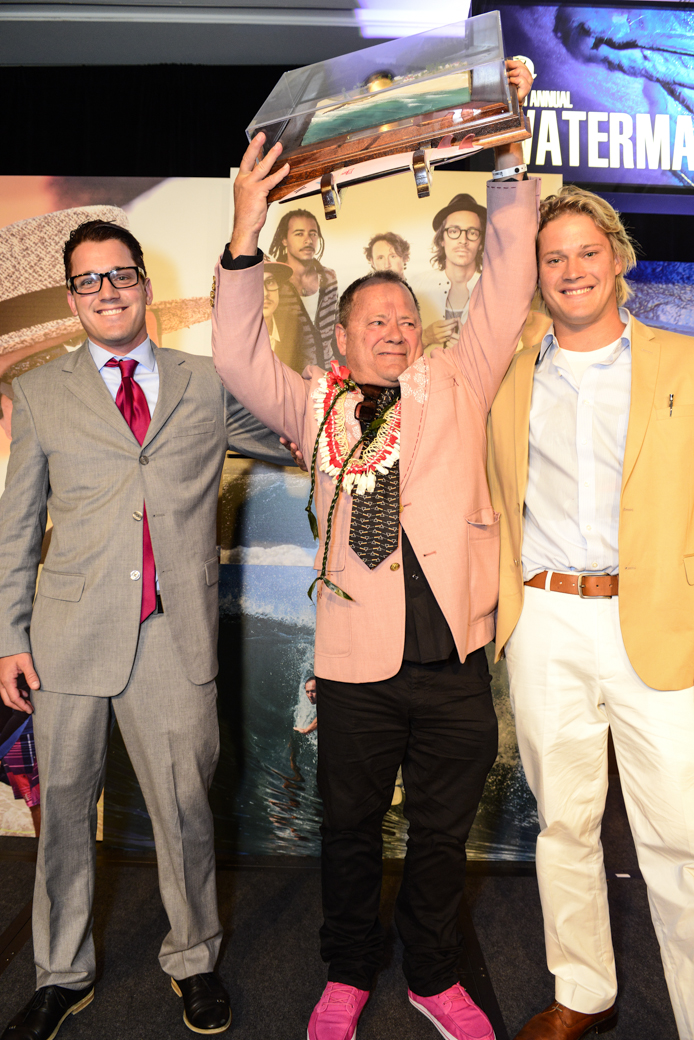 When Peter “PT” Townend was called to the stage at the Surf Industry Manufacturers Association’s annual Waterman’s Ball, August 10 at the Ritz-Carlton in Dana Point, the “this is your life” tribute was not his first. As recipient of the 2013 SIMA Lifetime Achievement Award, a short film reflecting on his life’s work preceded the award presentation and included clips from the 1978 Australian television production of “This is Your Life.” His world champion status and other early accomplishments as a surfer earned him a spot, as the youngest guest ever, on the TV show.

Townend, a native of Coolangatta in Queensland, Australia, became the first professional World Surfing Champion in 1976 and has spent every year since working for the betterment of surfing as a sport, a lifestyle and an industry.

Now, at the age of 60, his bio includes such achievements as serving alongside Ian Cairns as the first executive directors of the National Scholastic Surfing Association in 1980, coaching the United States Surfing Federation team to a 1984 gold medal in Australia, acting as president of SIMA in 1988-1989, founding Surfing America and serving as president from 1997-2004.

Together with his SIMA presidential successor Dick Baker and with the help of 1960 Olympic gold medalist Terry McCann, Townend succeeded at earning National Governing Body (NGB) status for Surfing America. He returned the U.S. surf team to the International Surfing Association world championship podium in three of five appearances as head coach from 2004 to 2007.

Townend also has nearly three decades worth of experience in the media including positions as advertising director/associate publisher of Surfing, Bodyboarding and Volleyball magazines, publisher of Primedia’s Surfing Group and marketing and events director for Primedia Action Sports Group.

“My mother told me, ‘Be the best you can be,’ and every day I’ve tried to do just that,” Townend said. “In the ’80s the USSF was struggling, not even in the top 10, and that just wasn’t acceptable. I wanted to do what I could to make the U.S. a contender. And being part of the “Bustin’ Down

the Door” generation, we were all pretty hell bent on making surfing a professional sport.

“I feel honored by this recognition and reflecting back, I am most proud of the 30 years of working with the people in the room at the ball, many of them close friends. Being recognized by the room is more important to me than being a former world champ.”

Townend said his biggest and most important successes for the surfing world was gaining NGB status for Surfing America and keeping the dream of seeing surfing become an official Olympic sport alive. But his greatest achievements by far, he said, have been raising children into successful adults.

“My daughter Rana and sons Jye and Tosh are all grown up, gainfully employed and not in jail,” Townend said with a laugh. “I am also very proud of my great relationship with my ‘Brasil babe’ Leila Endersby—it will be 12 years this month—and being a step-dad to her daughter Bianca Endersby.”

Leila Endersby said she is also very proud of Townend and that when it comes to making a difference, he really “walks the walk.”

“I think this honor is well deserved,” said Leila Endersby. “PT is one of the few people I’ve met who does everything he can for the betterment of surfing in all levels. He always cares so much for the kids, especially making sure they understand the beauty of being a surfer and have manners in and out of the water.”

Townend said he was touched by how many family members and friends rallied around him on his big night. He was delighted that his sons presented the award and that he received a phone call from his 90-year-old father Barry in Queensland, just before taking the stage to receive the award.

Townend’s brother Craig Townend flew in from Australia to attend the event as well.

“It was an honor to represent the Aussie side of the family,” Craig Townend said. “It was an achievement that was truly deserved and a very emotional moment for all of us.”

The SIMA Waterman’s Ball is held annually as part of Waterman’s Weekend, a fundraising effort including a golf tournament, benefitting 20 nonprofit ocean-related conservation organizations and pays tribute to individuals who have had an impact on the sport of surfing.  This year’s event raised over $400,000 and the ball hosted more than 600 attendees.

This year’s other honorees included Waterman of the Year, Fernando Aguerre, Environmentalists of the Year, Brandon Boyd and the band Incubus, and a Special Achievement Award went to Waves 4 Water founder, Jon Rose.