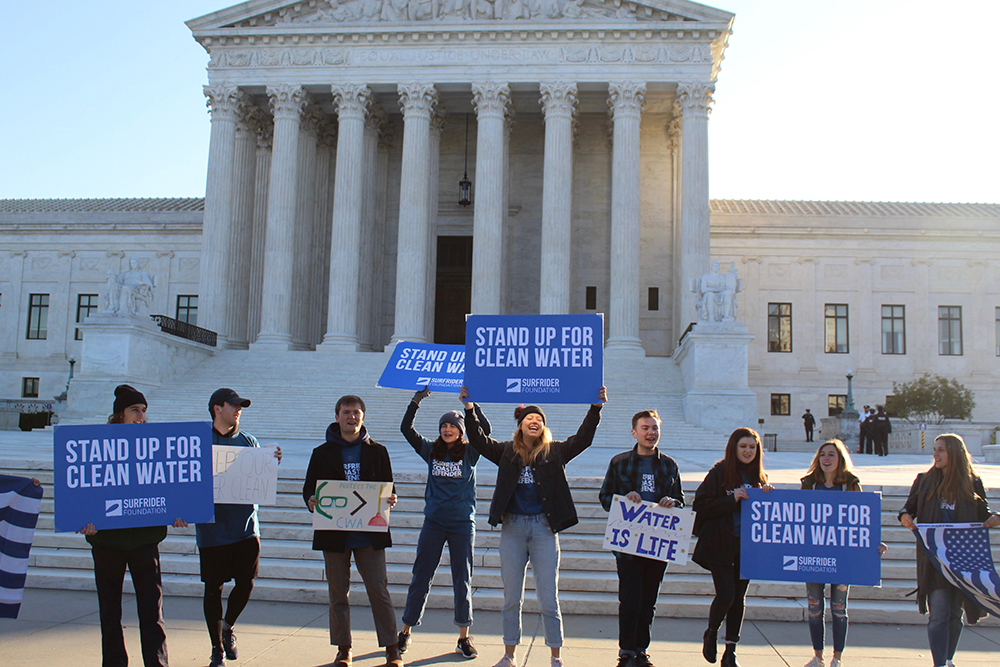 Surfrider Foundation notches a huge victory in defense of the Clean Water Act.

In addition to all that’s been happening with our local beaches and the various openings and closings over the past couple of months, there’s other important surf news that hasn’t been getting the attention it deserves.

One of the big stories that we should all be celebrating is the San Clemente-based Surfrider Foundation’s victory in the U.S. Supreme Court at the end of April.

The Maui chapter of Surfrider originally filed its litigation against the County of Maui back in April 2012. It was filed as a result of groundwater pollution from the Lahaina Wastewater Reclamation Facility.

Surfrider and its co-plaintiffs alleged that three-to-five million gallons of treated sewage was finding its way into the Pacific Ocean each day through groundwater beneath the facility. As a result, nearby beaches and reefs were dramatically impacted.

The U.S. Supreme Court decided that Maui was in violation of the Clean Water Act and was responsible for the pollution.

“The Clean Water Act (CWA) requires those who discharge pollutants into navigable waters from pipes or wells to obtain a federal permit,” explains a Surfrider statement. “The district court and Ninth Circuit Court of Appeals agreed with the plaintiffs, but the County appealed to the Supreme Court.”

“The question presented to the Supreme Court was whether the CWA requires a permit when pollution originates from a point source (like the wastewater plant on Maui) but is conveyed to navigable waters by a non-point source, such as groundwater here,” the statement continues.

The County of Maui and Environmental Protection Agency had been pushing for a stricter reading of the Clean Water Act, which would have absolved them of responsibility for the polluted groundwater.

Their contention was that the pollution did not “directly” enter the waterway. The Supreme Court agreed with Surfrider that there are protections in the Clean Water Act for groundwater pollution, referred to as “point source pollution,” such as this.

The Supreme Court heard oral arguments for the case on Nov. 6, 2019. Surfrider was joined in the case by Sierra Club-Maui Group, West Maui Preservation Association and Hawai’i Wildlife Fund, as represented by Earthjustice. The final verdict was handed down on April 23.

“Congratulations are deserved for Surfrider Foundation’s Maui Chapter that has been working on the complex and arduous campaign for over a decade in order to reach today’s rewarding decision,” reads a statement from Surfrider’s Angela Howe.

The case has now been remanded to the Ninth Circuit Court of Appeals to apply the new “functional equivalent” standard. Surfrider members believe they will ultimately be victorious. The case was remanded

“Surfrider Foundation is very pleased with the Court’s ruling today, and we are confident that the 9th Circuit Court of Appeals will rule in our favor on remand,” continues the Surfrider statement. “The ruling makes clear that at least some instances where point source pollution (such as the injection wells in Maui) that travels through groundwater to a water of the United States, like the Pacific Ocean, will be covered under the Clean Water Act.”

A huge win for Surfrider, this decision is not just important for the people who live and enjoy the ocean in Maui, but the effects will potentially reverberate around the country and set a precedent for other legal action in the future, as needed.

From a local perspective, maintaining the health and integrity of our local waters is paramount to the health of both our community and economy. At present, the San Onofre Nuclear Generating Station (SONGS) continues to go through the decommissioning process, which includes storing more than 100 stainless steel canisters full of nuclear waste close to the waterline at San Onofre. And in Dana Point, the harbor is just about to go through an expansive and comprehensive upgrade.

In both instances, there is a potential for pollution to find its way into our local surf breaks. And while it will take vigilance on everyone’s part to ensure the health and integrity of our beaches remains undisturbed, it’s great to know that, right here, in our own backyard, we have an advocate such as Surfrider that knows what it means to take the fight to the highest court in the land and come away victorious.