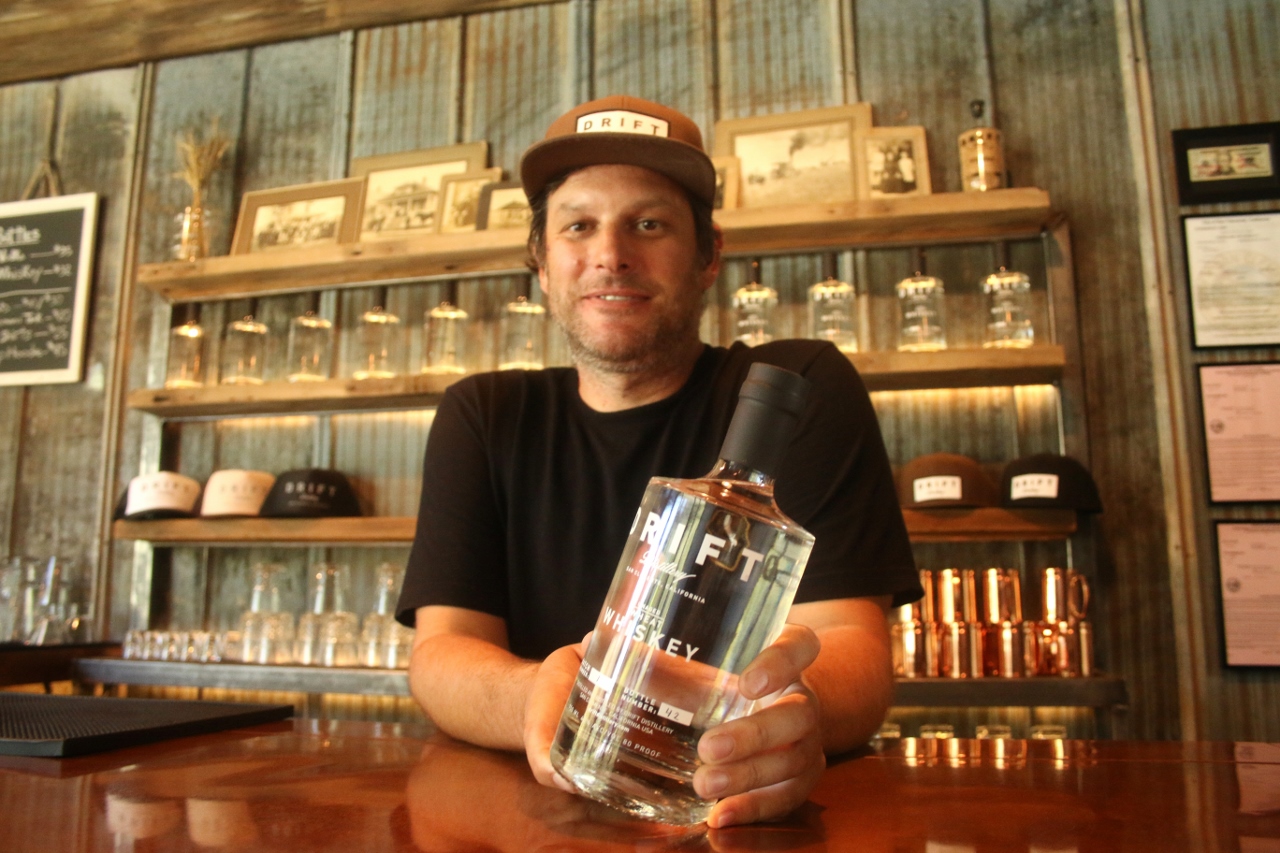 Grains of wheat ferment and other spices fuse with flavor. Heated by the distillery, the molecules trickle down into a copper still to combine with alcohol.

This chemical processing creates Drift Distillery’s signature whiskey and vodka, San Clemente’s newest liquor and spirits operation and the second distillery in Orange County since the Prohibition Era, according to owner and operator Ryan Winter. Winter and his wife Lesli will be opening the doors of the new South Orange County business in the near future.

Ryan describes Drift’s whiskey as more of a moonshine, but tamer. Made of 100 percent wheat mash, he said it’s made to be barreled and they have started to bottle it for purchase. Although Drift is only currently concocting whiskey and vodka, Ryan says they also have plans to make gin and rum, made with molasses or sugar cane juice. The Winters also have an interest in producing a rye whiskey and bourbon.

When asked, Ryan said his favorite part of distilling whiskey and vodka is “drinking it.” But he said he enjoys the process of bottling it and seeing the final product too.

“My favorite part of the process is the fermentation,” Ryan said. “Seeing it bubble and the smell; it kind of smells like a bakery. There’s a lot a going on, and you can actually see the process of it bubbling. If you go to a brewery, everything is closed so there isn’t any ‘contamination.’”

For Lesli, the triumph is in the finale.

“I just like seeing the bottles fill up with the finished product; it’s such a sense of accomplishment,” Lesli said.

Ryan Winter, founder and owner of Drift Distillery in San Clemente, stands next to the distillery equipment at the business. Photo: Eric Heinz

The shelves of whiskey and vodka are filled up at Drift Distillery in San Clemente. Photo: Eric Heinz

Ryan Winter, founder and owner of Drift Distillery in San Clemente, stands next to the distillery equipment at the business. Photo: Eric Heinz

The shelves of whiskey and vodka are filled up at Drift Distillery in San Clemente. Photo: Eric Heinz

Originally hailing from Kansas, the husband-and-wife team have transformed Drift into a true family business. However, the irony behind the Winters home state is that Kansas has historically some of the strictest alcohol laws in the country, and there are still multiple “dry,” or alcohol-prohibitive, counties as of 2013.

“On a Sunday during a football game, you would have to drive across the border to Missouri{to buy alcohol} because their doors were open,” Lesli said.

With family members still in the state of Kansas, cutting costs of materials for the Winters distillery is a bit easier than what most businesses may experience. A large portion of the grains and wheat needed to make the liquors is given to the couple by their parents from their Kansas farms. Ryan also has a cousin in Apple Valley, Calif., who sends them excess materials and Ryan does the same when he has a surplus. Even the pair’s two daughters help with the processes in their business.

Regulations behind opening a distillery

Despite the excitement with opening a distillery, the Winters have traveled a long road to get to opening day, including a lengthy process of regulation approvals and proposals.

Lesli said the business has passed every inspection it needed from the federal government down to local municipal requirements. The Alcohol and Tobacco Tax and Trade Bureau requires distilleries to first have a permitted commercial space in order to open its approval.

“It took 10 months to get approval, and there’s a bit of a risk in securing a lease,” Ryan said. “We’ve leased this space for three years, and had been in it 10 months before we even knew we were approved. Then it’s about getting all the equipment. It took about a year to get the still made. Then it’s planning, making sure your landlord knows what you’re doing, letting the city know what you’re doing. And for the tasting room, I had to get a CUP (conditional use permit) during a public hearing.”

But after going through the process with the city, Lesli said government officials were hospitable to their business proposal.

“That was one of the reasons why we wanted to (open another business here in San Clemente) was because of the community,” Lesli said, mentioning their previous business endeavors in the digital advertising agency world. “It’s so supportive of local businesses.”

The couple have lived in San Clemente for more than 20 years, and Ryan said they had established their reputation, at least enough to convince people they would be attentive owners of such a business.

“I think our current goals are to get the tasting room open (consistently) because opening a distillery is nothing like opening a brewery or winery,” Lesli said. “We have so many hoops that we have to jump through, and literally the last hoop we were waiting for is the Orange County Health Care Agency.”

Lesli said their second goal is about increasing distribution.

“We keep in touch with a lot of friends around the country and they want to know when we will open officially and when we will start distributing,” Lesli said.

Ryan said liquor laws require the business to use a distributor for their wholesale products rather than distributing the beverages themselves, which differs from the distribution of beer.

“Prior to 2016 (in California), there were even stricter regulations,” Lesli said. “You could have a distillery and a tasting room, but you couldn’t sell to consumers directly.”

Although the bureaucracy behind Drift has primarily passed, Ryan said the one other element that is difficult about distillation is keeping the tanks clean.

“The milling process, the mash, is not too difficult,” Ryan said. “We’ve got forklifts that will help lift stuff, kids who will help carry buckets. But when you love what you do, none of it is really work.”

How basic distillation works
Distillation is a process of heating and separating liquid from solid materials that dates back before Common Era. It is a function of heating ingredients and alcohol to a point where they condensate and collect in a chamber, which leaves the finished product.

The kind of distillation conducted at Drift Distillery uses columns to turn the mash into vapor that is cooled after being boiled.

Depending on the ingredients and alcohol content, it could be a whiskey, rum or other kind of alcoholic product.

Drift Distillery is located at 940 Calle Amanecer, Suite K, in San Clemente. The business isn’t fully open yet, but the tasting room is available at certain times. Call 949.337.2318 before making a visit. People can buy up to three bottles per person per day. For more information, visit www.driftdistillery.com. Since the Winters obtained their liquor license, more distilleries have popped up on various networking sites. Visit www.sanclementetimes.com for a video on the distillery.