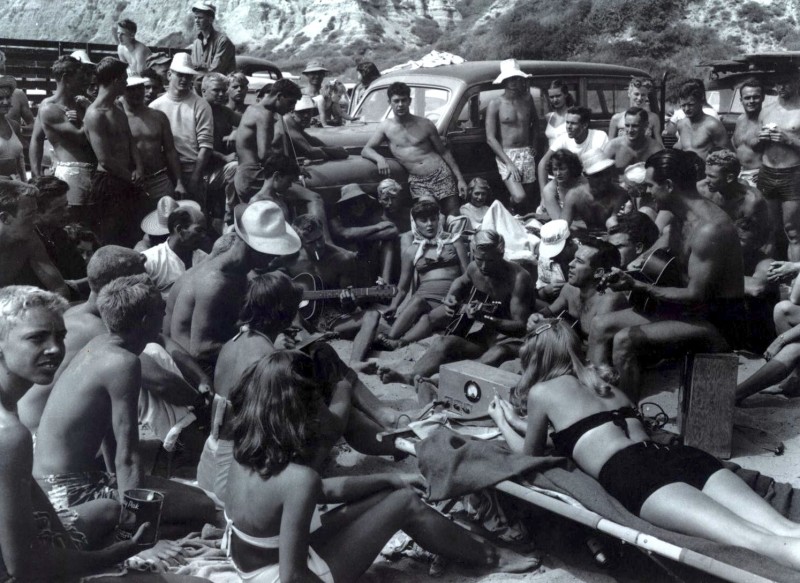 Tales from the Fish Camp: A Brief Look at San Onofre’s Earliest Days

After water polo practice a few nights ago, a couple high school kids were chatting about the impending road repairs at San Onofre and how it may impact their surfing habits.

“I heard the road’s going to be closed while they bring in some boulders and repair the road,” said one.

“That means we can’t surf the Point or Old Man’s,” matter-of-factly said the other.

“Dude! Good thing I have my electric bike, looks like I’m going to be surfing Church and Middles… what are you going to do?” the first snarked back.

The fact of the business is, when it does come time to repair the road at San Onofre, which was seriously damaged after large swells and tides washed a portion of it out this past winter, we will all be somewhat inconvenienced. Unfortunately, that’s the nature of roadwork. When and how long the repairs will take remains up in the air.

In the interim, a spring refresher on the glorious, and sometimes dubious, early days of San O. Did you know that nobody knows where the name San Onofre comes from? It’s a trick question, but the truth is that nobody seems to be able to figure it out. The name shows up on the original Santa Margarita Land Grant documents dating back to 1836, but there’s an argument to be made that “San Onofre” is a twisted amalgamation of the local Native American dialect and Spanish that was coined by early European settlers to describe the creek and nearby valleys. There’s another school of thought that believes Spanish missionaries named the area after the 6th-century Egyptian saint, Onofreas. Whatever the case, when a small train station was built in 1880 and a hand-lettered sign hung out front reading, “San Onofre,” it was official.

Surfing didn’t really come to San O until the 1930s. At this time, there were probably less than 100 surfers in Southern California and eventually word of a fishing camp on a desolate stretch of beach halfway between Los Angeles and San Diego captured their imagination. The trip to San O was considerably different back then. Imagine heading south, ambling down a two-lane road through San Juan Capistrano, citrus groves in full bloom, the ocean rich with sea bass and halibut. Abalone and lobster thrived in the tide pools. No Interstate 5 or nuclear power plant. No traffic or waiting in line to park. It must have been a little slice of heaven.

In 1937, a man by the name of Frank Ulrich took control of the fishing camp. He opened a gas station and cafe along the Pacific Coast Highway and began charging surfers 25 cents to spend the day at “his” beach (50 cents covered you for the weekend).

“Times were tough in those days, money–wise,” lifelong San Onofre surfer E.J Oshier told the San Onofre Parks Foundation. He passed away in 2007. “It was still in the depression days, see? Money was hard to come by, and some of us guys were coming all the way down from the Palos Verdes area. So, we’d get a few of us to pitch in enough for some gas and a jug of wine. … That’s why we didn’t spend money on surfboards or trunks back then. If any of us had (money), we were off to ’Nofre.”

“We’d camp out there for days at a time and just sleep on the beach,” explained the late Leroy Grannis, who was a surf photography pioneer and distinguished member of the Palos Verdes Surfing Club. “During the week, you would get it all to yourself; but on the weekend, all sorts of characters showed up.”

Throughout the ’30s, the crew at San Onofre coalesced around the concept of remaining aloof from the rest of the Southern California surf scene, which by this time was starting to take itself more seriously. Competitions were starting to be organized and regional surf clubs formed.

“The real ’Nofre guys didn’t care about a club,” explained Oshier. “They went there to get away from that.”

This little golden period in California surf history could only last so long. In 1941, the United States entered into World War II and a lot of the San O regulars signed up for the service. In 1943, the U.S. Department of Interior claimed eminent domain over the Santa Margarita Ranch property, and it was leased to the Marine Corps and Camp Pendleton was built. Ulrich ended up losing his fish camp while the commanding officer of the new base denied all public access to the beach. San O would enjoy a renaissance after the war, but for those that were there in the early days, it must not have been the same.

Times change, generations come and go, but as I was driving home from water polo practice, I couldn’t help but think about those two kids and what kind of fun they were going to have this summer. Whatever happens next down there, it always has been and always will be about spending long days on the sand and in the water.