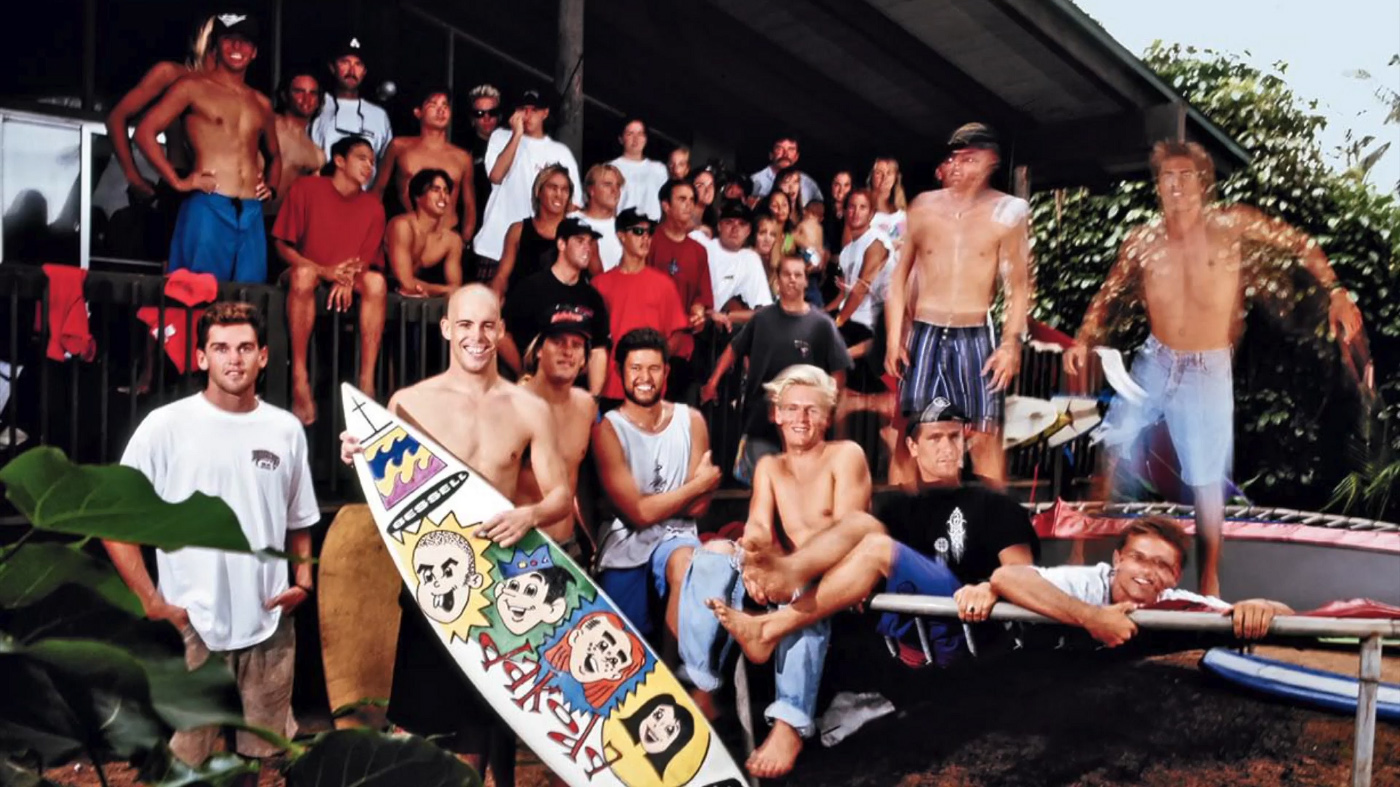 It’s been nearly 30 years since Kelly Slater groggily mumbled, “It’s the morning of the final.”

The year was 1990, and a young Slater was exploding onto the surf scene with a statement-making victory at the Body Glove Surf Bout at Lower Trestles. Signing a record-breaking contract with surf-wear company Quiksilver on the beach, Slater and his crew—dubbed the “Momentum Generation”—were on the cusp of changing the sport of surfing forever.

But predating that famous Lowers performance, during the winter of ’89, Slater, Rob Machado, Shane Dorian, Kalani Robb, Ross Williams and a handful of other characters all lived under one roof on the North Shore of Oahu. San Diego surfer Benji Weatherly’s mom had rented a house right on the beach at Pipeline and opened the doors to her son’s friends.

“Sure, we all already knew each other for a few years prior, but this house was the place that allowed us to hang out together for hours upon hours, days upon days, and weeks upon weeks,” Williams said. “The friendships that were fostered would catapult us as a group into stardom.”

A huge cog in the wheel of this success was the timing of a young filmmaker from San Diego named Taylor Steele.

“He came to Hawaii for the winter of ’89 to surf and video his friends. He stayed in a rusty old van that he just so happened to park in front of Benji’s house,” Williams said. “All the pieces came together for his eventual project that helped change the surf world.”

In ’92, Steele cobbled the footage together, got the OK from a few of his favorite punk bands to use their driving, up-tempo music as a soundtrack, and released Momentum on VHS. His parents practically laughed him out of the house—until he sold out of copies. The film was an instant success.

The story of how it all went down is now being told in a full-length documentary produced by HBO and Universal Pictures, with executive producer credits going to the one and only Robert Redford.

“There is a lot to cover in 30 years, but as a director I was trying to figure out where they were leading the story as they conducted the interviews and put the pieces together,” Steele said when it was time to sit down for his interview. “I was nervous, because we talked about being honest and saying what really happened, and you never know what’s going to happen when you come out on the other side of something like that.”

Momentum Generation is an intriguing dive behind the scenes of how a few kids from Florida, Hawaii and California were able to turn the sport of surfing on its collective head. Somehow, they were all on hand to share in the moment.

“Benji suggested we all dress as Reservoir Dogs, but it is kind of a miracle we’re all in suits,” laughed Steele.

“It was this time in our lives where things were moving and naturally changing. It was really exciting. We were all at Benji’s house and it was the focal point where we all came together and grew up together,” added Slater.

In their heyday, the Momentum crew was notoriously squeaky clean. It was seemingly all good vibes and high fives, but as the surfers came of age and there was more at stake in their professional careers—money and world titles on the line—covert rivalries brewed and tensions sometimes flared.

“I’ll speak for all of us, we probably went to sleep after sitting for an eight-hour interview wondering if we said something that would later be used against us,” said Machado, who famously missed out on the ’95 world title in the seminal “high-five” moment during the Pipeline Masters. “They weren’t asking us about where we learned to surf or any of that stuff. They went straight for the jugular.”

The idea for the project began six years ago, after Steele put together a reunion trip to the Mentawai Islands for the original Momentum crew. When they got back home, Machado and his long-time manager, Justine Chiara, came up with the concept for the documentary.

“For us, coming from outside the surf world, it was really important that we were going to do this, that they were willing to go beyond just making a surfing film. That was really encouraging to us,” said director Jeff Zimbalist. “The focus from the onset were the bonds of friendship and family, but then also this insider’s look at the cultural zeitgeist of the ’90s that this Momentum crew is at the center of.”