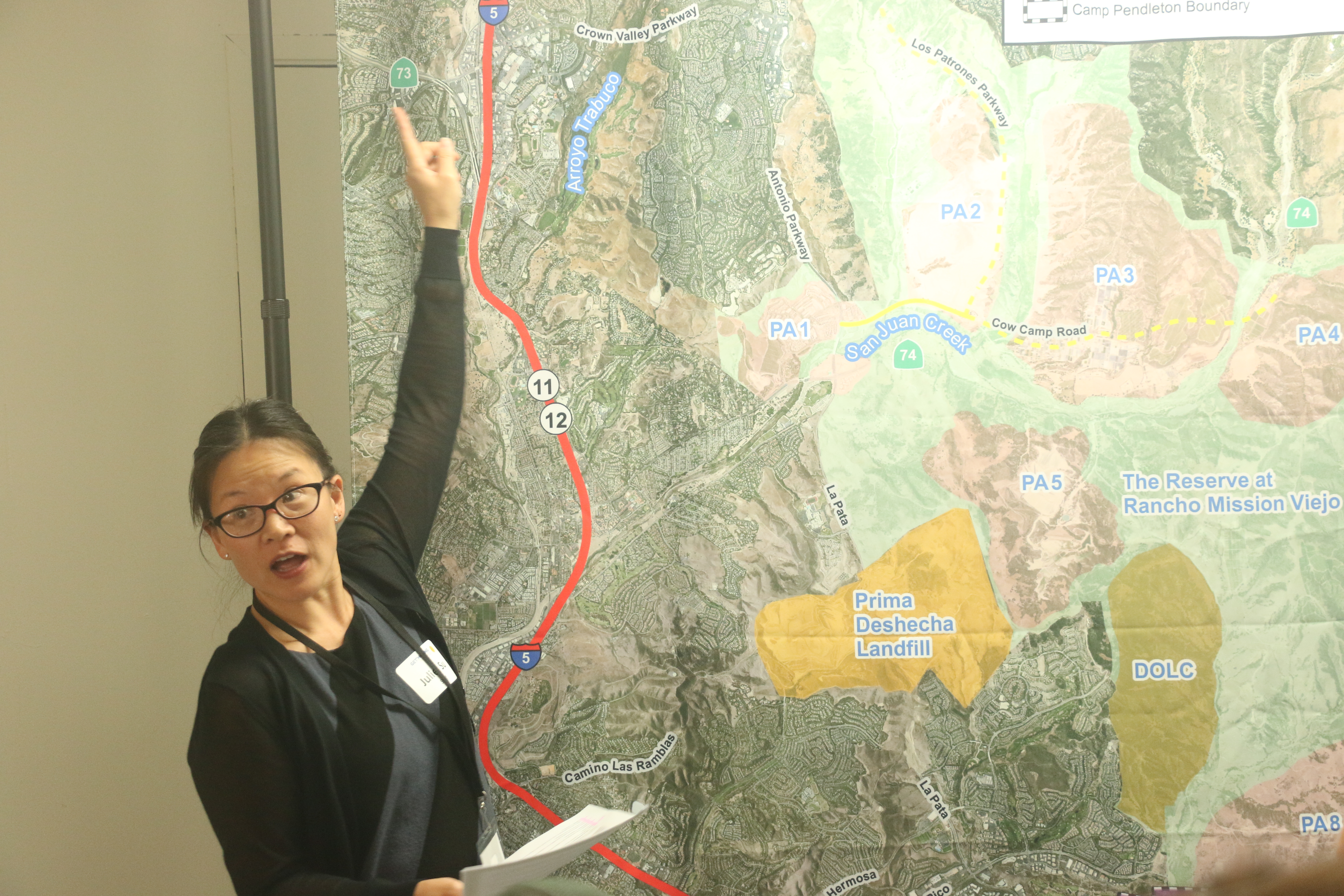 To see the different proposals, click here:  click-here-to-read-the-proposals To see raw data from the TCA and Get Moving Orange County, visit www.getmovingoc.com.

Toll Roads and San Clemente have a strained relationship at best. It’s adversarial at worst.

Since at least 2008, the Transportation Corridor Agencies (TCA) has been trying to find a way to connect the 241 Toll Road to Interstate 5 by way of San Clemente and its neighboring areas.

Plans to build a toll road through Trestles was defeated in 2008 and in early 2015, but TCA is now holding consensus meetings to gather data from the public to address a broader issue that seems inevitable: alleviating traffic through the South Orange County corridor.

TCA recently hosted two meetings to hear public input about finding transportation alternatives to the I-5 and other existing transportation infrastructure. One such meeting took place Oct. 5 at St. Andrews by-the-Sea in San Clemente, where more than 200 people attended, according to TCA officials. The information from the meeting will be presented to a community task force on Oct. 19. Some of the ideas discussed included roads that would go through Cristianitos; a long road from Ortega Highway that would eventually connect to Avenida Pico; more lanes to the I-5 corridor in San Clemente; traffic light synchronization; more bike lanes; and increasing train frequency.

The planning, environmental studies and conception of any plan will take at least seven to 10 years, TCA officials said.

Meanwhile, another obstacle any plan must consider is the increasing number of families coming into Rancho Mission Viejo, which is still being filled and is planned to be built out in 10 to 20 years—the development area has about 14,000 homes. The subdivision is basically at the junction of Ortega Highway and the end of La Pata, and people at the Oct. 5 meeting said development there will affect traffic coming down through San Clemente.

Soliciting Ideas from the Public

Mike Chesney, chief strategy officer of the TCA, said the TCA started conducting community input and gathering consensus data in early 2015 to see what transportation options would be preferable for residents.

A task force was formed to provide regional transportation representation (San Clemente City Councilwoman Kathy Ward is the representative from San Clemente for the San Joaquin Hills region of TCA).

Jeff Corless, managing director of Venture Strategic, a consulting firm working with the TCA, said the latest proposals use information from the Orange County Transportation Authority (OCTA) and Southern California Association of Governments as well as other stakeholders. These proposals take into consideration any infrastructure that could be in place by 2035.

“This is solving a problem defined by the public and verified by a significant amount of data and planning documents,” Chesney said. “The working group decided it would be important to launch a public input forum series … and incorporate the needs and priorities.”

One of the challenges of improving transportation routes, especially in south San Clemente, is the potential of impacting natural resources.

“The San Mateo Watershed is an environmentally sensitive area,” Chesney said. “Any major large transportation project has to go through the CEQA and NEPA process, and it’s a very deliberate process in knowing what you have to do for mitigation. If you affect an acre, you have to normally give back more than an acre.”

There’s also the potential, in these early stages, that any given proposal will not contribute to the flow of traffic in a significant way.

The plans and data are compiled by Get Moving Orange County, a general brand used by TCA for people to peruse information and ask questions regarding the toll roads.

Using the information from past proposals has been critical in understanding the priorities of residents in the area, Chesney said.

“Soliciting input from leaders in the community and people who have opposed the project in the past has been a key component of this,” Chesney said. “This is a much better process to address the transportation issues.”

The Toll Roads are funded largely by toll revenue bonds to finance the roads. The tolls collected on the roads pay back the debt. Some funding sources for the proposed extensions include OCTA Measure M funding, future TCA surplus toll revenue and competitive grants for bicycle lane additions.

There are also ideas to get more train frequency through South Orange County, but some of the costs could be prohibitively expensive ($8 billion for a tunnel, for instance, was just an estimate).

“Clearly, as an agency we’re tasked with planning for the future, and 2035 numbers are what we’re basing this on,” Chesney said. “Some say we’re already at a critical threshold (of traffic).”

In order to implement the proposals, a wide array of permitting and getting access to certain areas will be critical.

“The process of evaluating impacts is done through technical studies, right-of-way impacts, social justice impacts, air and water impacts,” Chesney said. “Those have to be approved by everyone involved, and input from the public has to be addressed. There’s definitely interest to see open spaces protected.”

During the Oct. 5 meeting, Orange County Board of Supervisors Chair Lisa Bartlett said she wants to see what the data reveals from the consensus forums.

“I’m all about process, and I think right now we want to get all the stakeholders to give input to the process,” Bartlett said. “We need to think collaboratively (about projects) that work for South Orange County.”

San Clemente City Councilwoman Lori Donchak, who is the current chair of the OCTA board of directors, said current projects need to be evaluated before moving forward with future proposals.

“I’m looking at it from a regional point of view, and the first order of business is we need to make sure that Avenida La Pata is doing what it’s supposed to do,” Donchak said, adding that gathering data on how people are using the road, signage and other safety measures need to be put in place to adequately understand its function. The La Pata Connection was completed in August.

“The second order of business is to get the Ortega Highway widened,” she said. “The third option, which I’m a big fan of, is extending the carpool lane from Pico on the I-5 to the San Diego County border so that we’re ready for the changes in the future.”

Donchak said that by 2045, there will be additional lanes added to the I-5 in San Diego County and some of them will be managed with a toll facility. Unless San Clemente adjusts for this future project, Donchak said, it could make for some congested traffic.

San Clemente resident Kevin Nelson, the founder of the Nature Commission, an organization that has been outspoken against any toll roads coming through San Clemente, said these plans are basically a repeat of what was proposed in 2008 and again in early 2015.

“All that land south of Ortega is wild and is in a very important network of watersheds and animal habitat and for people because it’s one large mass,” Nelson said.

Nelson drew particular attention to one of the options that runs around the east side of the Donna O’Neill Land Conservancy.

Disturbing the land within the areas proposed, he said, could have irreversible consequences.

“If you don’t save the species and the watersheds, then you’re sure as hell not going to have things for the people,” he said. “I’m essentially sure that people in the future will ask, ‘What happened in Southern California, where everything was taken in a rush of greed?’”

Areas such as the land in the Cristianitos Campground, an area deemed of historical significance with the Acjachemen and Juaneño native tribes, is another environmental concern, considering a few of the proposals.

“From my standpoint, I think of nature as a whole system,” Nelson said. “The laws give environmentalists and specific species that are disappearing … the tools to (oppose development), and I think that’s good, but it doesn’t necessarily subscribe to (the fact that with conservation) it’s the whole enchilada.”

San Clemente resident Don Kunze said he has been opposing toll road proposals for decades, but he said he wants to present a solution. Kunze was at the meeting with his own poster board.