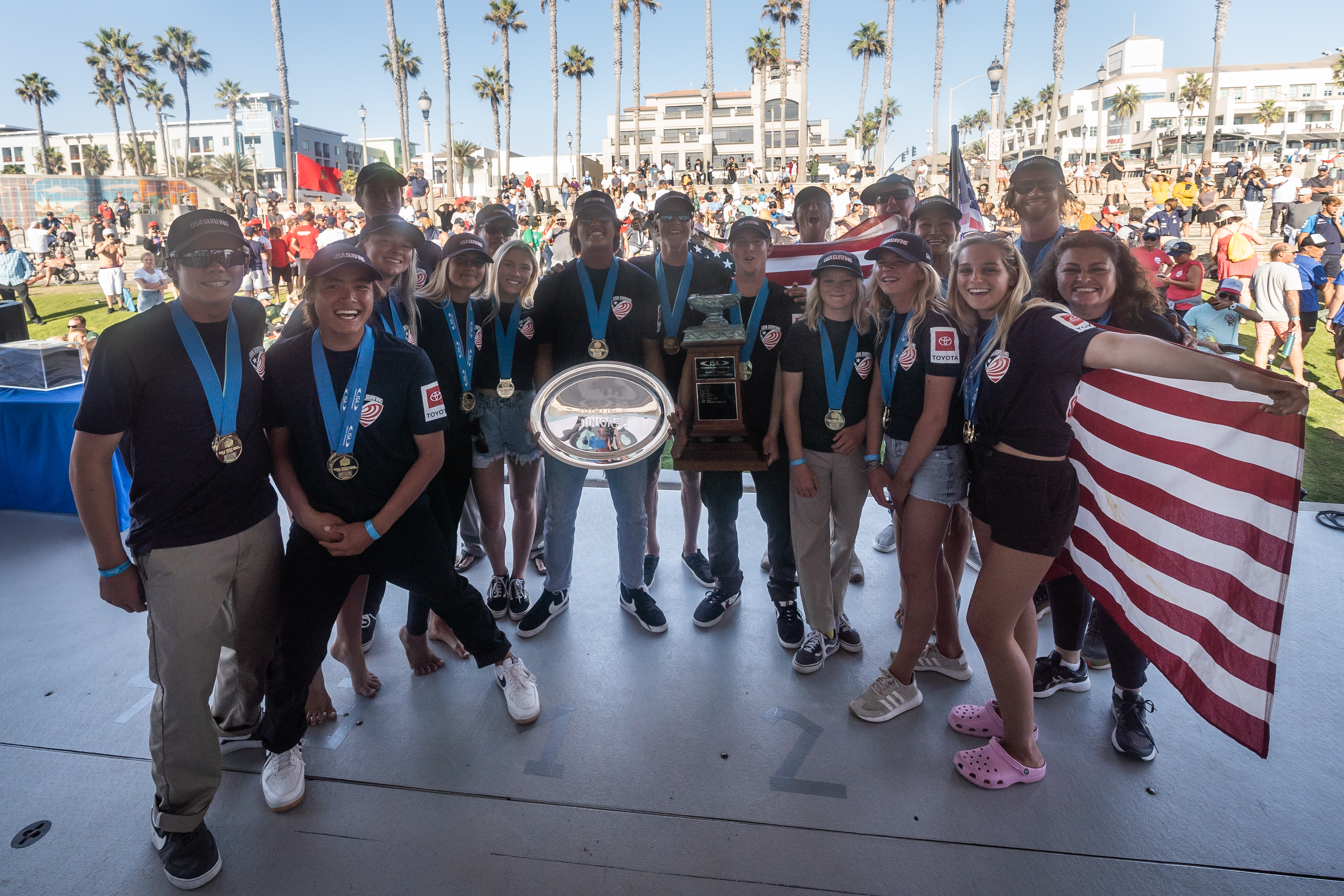 Over the weekend in Huntington Beach, with the sun shining and playful waist-high peaks on offer, Team USA once again asserted itself as the world’s premier national surf program. Capturing its second team gold medal in three years, it was a striking performance from everyone involved with the flourishing program.

“The level of talent at the ISA World Junior Championships is escalating at an exceptional pace. These are the surfers you will be seeing on the WSL Championship Tour and Olympics,” said USA Surfing CEO Greg Cruse.

This iteration of the U.S. Junior National Surf team was comprised of 12 surfers, including five from San Clemente: Taj and Sawyer Lindblad, Nico Coli, Samantha Sibley and Kirra Pinkerton.

“Coach Brett (Simpson) did a masterful job filling the roster with young, new talent that proved themselves in one of the most challenging competitions they will face in their careers,” Cruse said proudly.

The American team’s gold-medal effort was anchored by a huge breakout performance from Ventura’s Dimitri Poulos. Only getting the call to join the team two days before the contest started, he stepped up huge to win the gold in the Boys Under-18.

“The support of USA has been insane!” Poulos said afterward. “Everyone is down on the beach screaming for me.”

Poulos was joined in the final by Florida’s Tommy Coleman, who won the bronze. In total, the Stars and Stripes took home five individual medals. For the local San Clemente contingent, Taj Lindblad did the area proud, coming away with a silver medal in the Under-16 Division. This marked the American junior team’s third gold medal since 2015, including another in 2017.

The team from Hawaii also enjoyed its fair share of success atop the podium. Jackson Bunch took the gold in the Boys Under-16, while Gabriela Bryan won the Girls Under-18.

“It’s pretty awesome to win gold,” Bunch said after the awards ceremony. “I was reviewing the past champions of this event, and I couldn’t believe how many people on (the World Surf League Championship) tour had won this event.”

“It feels great to see all the hard work pay off,” Klapp said. “Team Germany is the best team that I could ask for. They’re amazing.”

Going into the final day, the gold was a toss-up between the emboldened Japanese team that had won its first-ever team gold in 2018 and the American all-stars. Team USA held the lead by a mere 585 points. Hawaii and Spain were also in medal contention. Interestingly, both Australia and France, who have been at the forefront of the Olympic movement, found themselves chasing the field.

When it was all done, the U.S. held on for the team gold, Hawaii scored the silver, Japan took home the bronze, and Spain earned copper.

“The young talent was flaring in Surf City, USA! Huntington Beach threw every kind of condition imaginable at these kids, and they just tore into it, putting up big scores at just the right times,” said Team USA Coach Brett Simpson. “These are names you are going to see again and again in the surf scene.”

Not only did the Americans win the team gold, they also took home the coveted Aloha Cup. Defending their title in the team event on Saturday, Nov. 2, the drama came down to the final waves for each team, but the Americans were able to hold off a powerful Spanish team, ultimately earning the gold by less than three-tenths of a point.

“I’m speechless!” said Samantha Sibley after the win on Saturday. “Taro (Watanabe) came through on his last wave. I’ve known all my teammates for what seems like forever, so it’s amazing to win this gold medal with them.”

As the profile of competitive surfing continues to evolve internationally, the surfers competing in the junior championship this year could very well be the ones leading the charge when the Olympic Games are contested in Paris in 2024 or in Los Angeles in 2028.