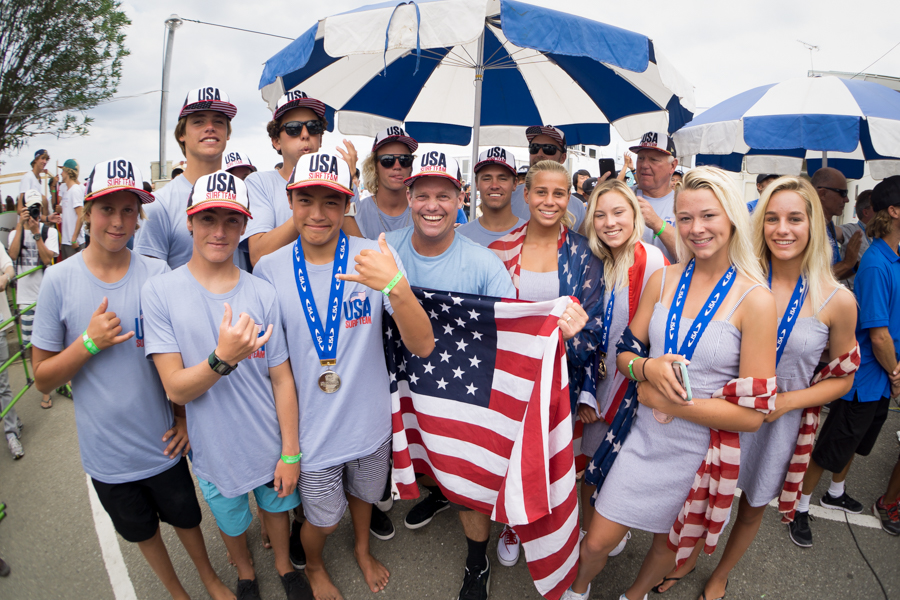 For America’s next generation of surf stars, the future is now. Claiming a team gold medal for only the second time in the U.S. program’s storied history, the boys and girls rallied to win team gold at the VISSLA ISA World Junior Championship. Heading into the final day of the week-long contest—taking place in quality, highly contestable surf at Okuragahama Beach in Hyuga, Japan—the Americans were in the lead, but needed some solid results to bring home the gold. That’s exactly what they got, including stand-out performances from a couple of local ladies.

In the Under 16 Girls final, Team USA’s Alyssa Spencer got on a roll early and never looked back. Hailing from Carlsbad, she opened the final with a near-perfect 9.87 to jump out to an early lead. She held on to claim her first individual gold medal, while San Clemente’s Samantha Sibley earned a bronze medal for her part in the action-packed final.

“This has been my dream since I started surfing,” Spencer said. “I can’t believe it’s actually true. I’m speechless. I wanted the gold so bad, and getting that nine right off the bat boosted my confidence so much. After that, I just needed another score to back it up.”

On the men’s side, South Orange County surfers Kade Matson and Cole Houshmand put in valiant efforts in the early rounds of the contest, but were relegated to the cheering section by the last day. Carrying the torch for the American boys, Los Angeles’ Noah Hill stepped up his game in the Boys Under 18. After snapping his femur trying a full-rotation air in 2016, he bounced back from injury and finished with a silver medal. Winning the division was Argentina’s Ignacio Gundesen.

“I am so happy to win this,” Gundesen said. “I am so proud that I’ve earned a top-eight spot for my country to compete in the ISA Aloha Cup next year. I couldn’t have done this without my team. This is for them. This is for Argentina.”

Finally, in the Boys Under 16 final, Malibu’s Taro Watanabe barely missed out on a gold medal of his own. In the dying second of the final, Japan’s Joh Azuchi ripped a wave all the way from out the back to the beach. The judges threw him an 8.6 for the effort. It was enough to edge out Watanabe by a mere 0.16 of a point.

“I can’t believe this happened,” Azuchi said afterward. “I am so stoked. I was able to win because there are so many people behind me, supporting me.”

The combined results of the American surfers proved to be just enough to edge out a savvy Hawaiian squad. Earlier this year it was announced that the sport of surfing would be included in the 2020 Olympic Games in Japan. The VISSLA ISA World Junior Championship is the first step toward the Games.

“What an incredible week of competition. We have witnessed history here in Japan on many levels,” ISA President Fernando Aguerre said. “We crowned the first VISSLA ISA World Champions in Japan in 27 years and also saw new nations earn their first gold medals…We certainly will see some of the athletes that competed this week in Japan among those representing their nations at the Tokyo 2020 Olympics in three years.”