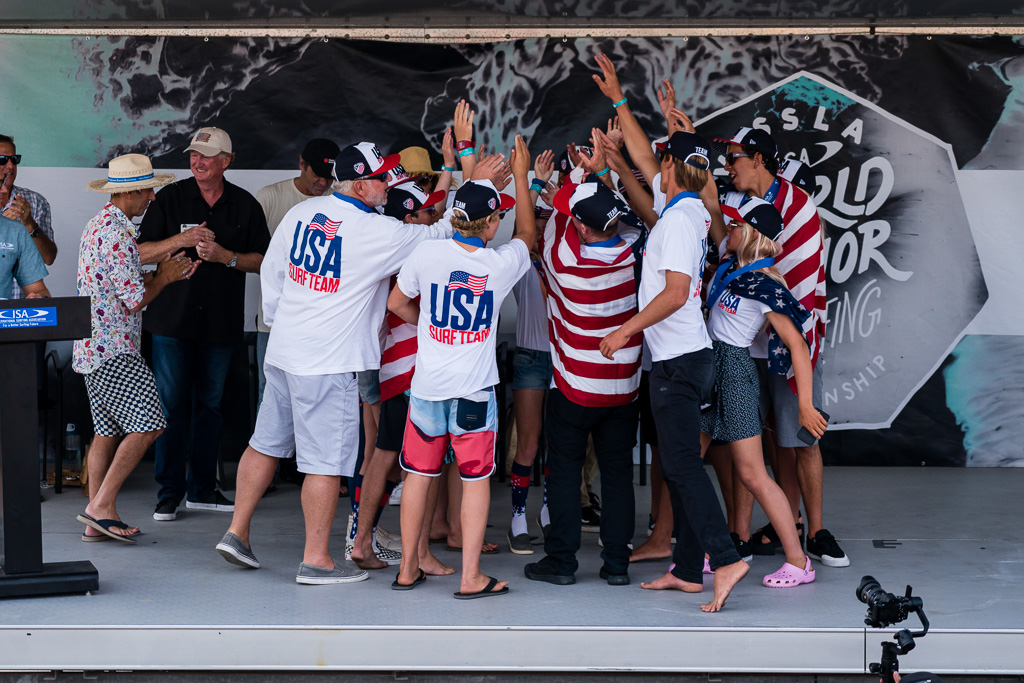 The drumbeat toward the 2020 Olympics in Tokyo and the debut of surfing in the games marches ever forward. And the closer we get to that historic moment, the better the United States national program is looking.

Last weekend, Team USA captured the silver medal at the ISA World Surfing Championship in Newport Beach. In 2017, the squad claimed gold, and while it wasn’t able to go back-to-back and defend its title, the performances of the individual athletes and the camaraderie that the team has developed are a sign of good things to come.

Heading into the final day of competition on Sunday, the U.S. surfers held a slight edge over rest of the field in the team standings by a mere 245 points. Winning the Aloha Cup on Saturday, they had seized the momentum going into the final day of competition, but the surging Japanese team ultimately took the gold after statement-making performances by a number of their athletes. In the end the U.S. ceded the top spot on the podium by a mere 132 points.

“We had 44 countries represented, almost a quarter of the world,” said ISA President Fernando Aguerre. “Keep an eye out for these young athletes in the lead-up to the Tokyo 2020 Games because we could very well see them surfing on the world’s greatest stage in sport.”

And while it may have been a bit of a heartbreaker for the U.S., they have every reason to hold their heads high and be proud of what they accomplished up in Surf City.

“Making the finals has never been so challenging. The level of surfing at this year’s ISA Worlds was simply next level,” said Team USA Head Coach Joey Buran, who has now become the winningest national coach in the program’s storied history. “These athletes will be storming the WSL Championship Tour and Olympics faster than anyone realizes. I am extremely proud of Team USA’s performances and stoked about surfing’s future.”

The highlight for the U.S. was the unlikely rise of Oceanside’s Caitlin Simmers who stepped up her game considerably to claim the only individual gold medal for the Americans. Surfing well above her age, the 13-year-old phenom blew away the competition in the girls under 16 division. Earning a 17.10 heat total in the final, she posted one of the highest scores of the entire event.

“It feels so good,” Simmers said. “Team USA is really supportive. It’s an honor to be a part of the team This is my biggest win. Since surfing is in the Olympics, that is a new goal for me to strive for.”

Simmers was the 2018 NSSA Rookie of the Year, and for the first time in contest history scored three perfect 10s at NSSA Nationals last June.

Given the hotbed of talent that San Clemente has become in recent years, Simmers certainly had help in the other divisions from a few Lowers regulars. In the Aloha Cup team event, area surfers and team captains Kirra Pinkerton and Cole Houshmand were joined by Jett Schilling and San Diego’s Alyssa Spencer en route to a commanding gold-medal performance.

In the boys under 16 division, Kade Matson earned a silver medal thanks to his progressive, all-or-nothing approach, pulling off a 360 air and a series of aggressive vertical turns in the final. Meanwhile, team captain Houshmand went to work in the boys under 18 final. Missing out on a bronze medal by a mere 10th of a point, he ultimately settled for the fourth-place copper.

For Team Japan, it was its first team gold medal in the history of the ISA championships and sets a highly competitive tone going into the 2020 Games. Rounding out the top four, Australia earned the bronze medal and Hawaii took home the copper.

“For anyone in Japan who surfs, they now know that Japanese surfers are capable of a gold medal,” said Japan’s Keanu Kamiyama, who won the gold in the boys under 18 division.

“We had an amazing nine days of sun, no wind, and great waves. It was incredible,” said Aguerre when it was all done and dusted.

In less than two years the Olympics will be here. The U.S. team is primed to make a serious push to become the most dominant surfing nation in the world…and it just might do it thanks to the passion and dedication of a few kids from town.