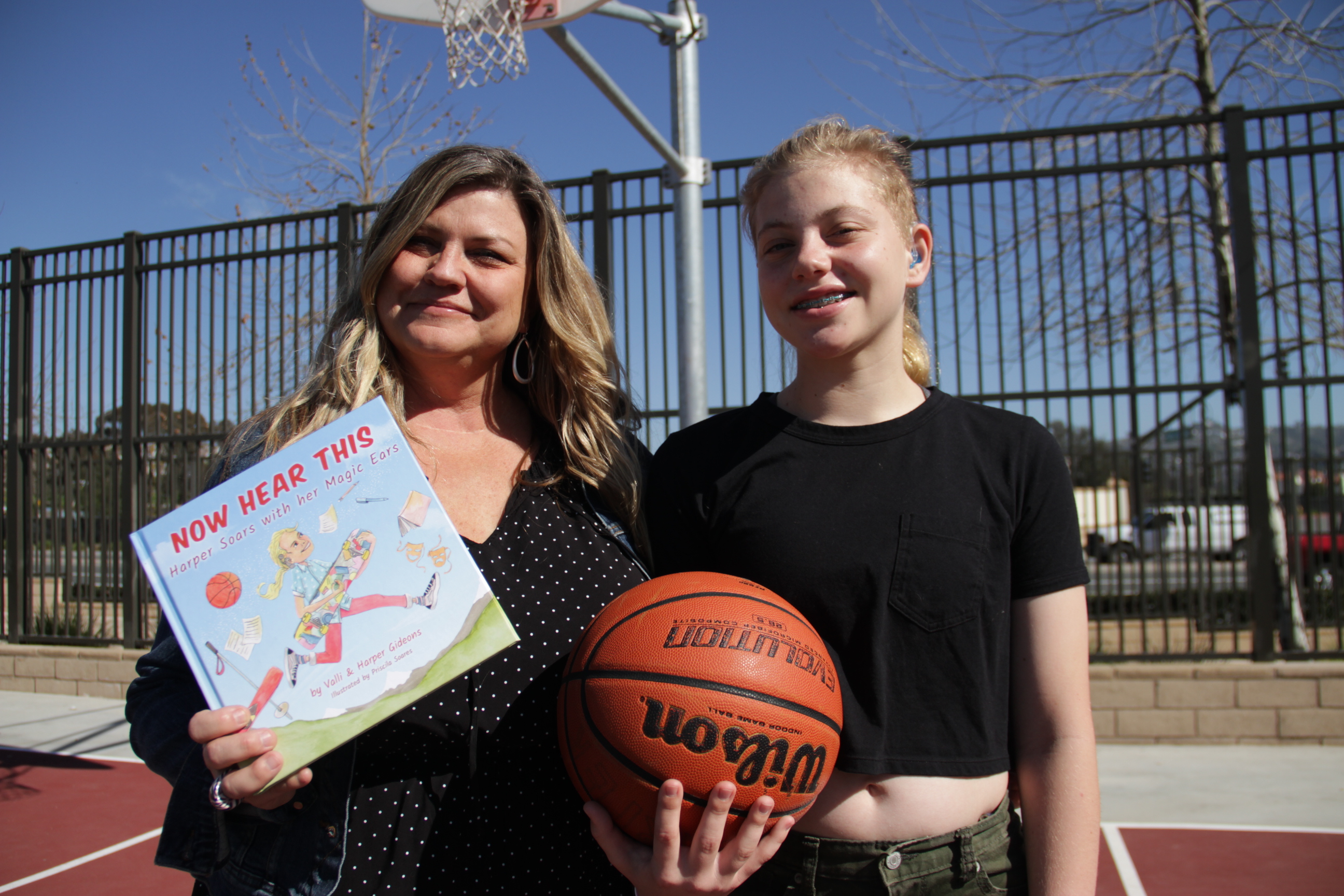 In March, 13-year-old Harper Gideons of San Clemente will visit various South Orange County classrooms, including one at her former school, Marblehead Elementary, where she’ll spend some time reading to children as part of the National Read Across America Day.

On the reading list includes her very own children’s book that she co-wrote with her mother, Valli Gideons, illustrating her life story as a child born with a hearing impairment. Told through Harper’s eyes and voice, Now Hear This: Harper Soars with Her Magic Ears! is an educational book meant to inspire other deaf children to enjoy activities like any other kid.

“It’s educational, and it’s encouraging, and it’s also, hopefully, leaving kids with the idea that they can read it and see themselves and also see what’s possible,” said Valli, who has become an advocate for people with hearing loss.

The elder Gideons, who has authored blogs and other resources to guide parents and their children going through similar struggles, said, “This is the book I wish we would have had.”

Valli explains that Now Hear This, which was released online through Amazon and Barnes & Noble this month, explains how Harper’s ears didn’t work like other children’s and required a cochlear implant to help correct the issue.

The story continues to show how Harper, despite her hearing impairment, can still enjoy activities and sports, such as playing basketball and skateboarding—just a couple of her favorite real-life hobbies.

“I also like to do woodworking in our garage,” Harper said. “And I also like reading and writing and playing with my dogs, and I also like to fight with lightsabers with my brother. I think I’m sort of Anakin Skywalker in my own fantasy world.”

Through the book, Harper and Valli explain, kids can also learn more about how to better communicate with a deaf friend. For those who have friends like Harper, that includes facing that individual during conversations and not covering your mouth while speaking so they can lip-read.

“I thought (the book) would be a good idea, because some of my friends had questions like how to help more, and people have reached out to my mom, saying, ‘My kid feels out of place, they don’t belong, and don’t know what to do,’ ” Harper explained. “And that kind of made me sad, because I don’t think someone should see themselves as less than someone else because of something you’re born with. So that hit me with the feels.”

Valli was drawn to the idea of writing the book a few years ago, when Harper was in the fifth grade. She said she had started reading through some of her daughter’s writing assignments, coming across one prompt that asked the students what makes them unique.

“It was this whole story about her being deaf,” Valli said, adding: “It was her story. This was the story . . . but that was kind of the beginning of the inspiration.”

The mother-daughter team got to work drafting the book and reached out to artist Priscila Soares to bring the illustrations and story to life. Soares, who is also deaf, as is her son, is known for creating art inspired by others who have lost their hearing.

After seeing Soares work in the same online magazine in which she had also been featured, Valli asked the Bay Area artist if she would illustrate Now Hear This.

“She said, ‘Absolutely, I want to be part of this.’ So, after I picked myself up off the floor, she started studying Harper,” Valli recalled. “She started scrolling through Facebook . . . started sketching her.”

Valli said Soares “really captured (Harper’s) essence,” which was important to the project, as they didn’t want the illustrations to just be a painting of Harper.

“We wanted to really capture her essence,” Valli said, adding: “I didn’t realize it would be that hard. . . . We wanted it to look like her, but not be a painting of Harper, so it was tricky.”

Asked what it was like to be a published author at her age, Harper said it’s a surreal feeling when she tells people, because many don’t quite believe her at first, prompting her to show them pictures of the book.

Despite, some skepticism among her peers, Harper does have a bit of a fan base among younger kids, Valli said.

“She’s already got kids who are fans of hers,” the proud mother boasted. “They look up to her; it just seemed like the natural thing.”

Harper noted that being an author wasn’t necessarily something she envisioned for herself as a future career, but she definitely has the taste for it now and would like to write more in the future, to see where it takes her.

“I do see myself writing more books, but I don’t know how I can make a career of it,” Harper said. “It’s very hard to do. I wanted to be the J.K. Rowling, but that’s going to be very hard to do.”