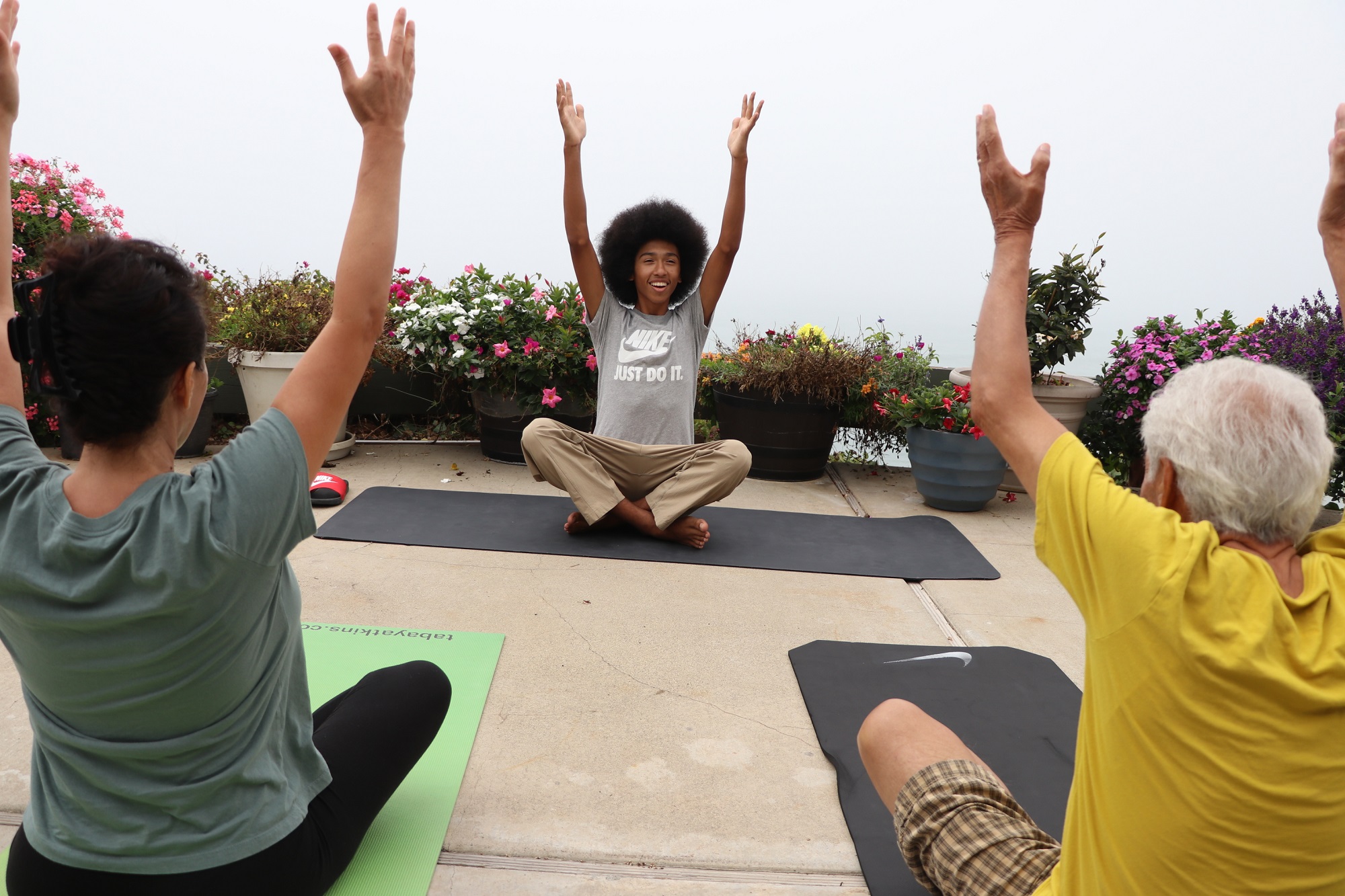 Teenage Yogi Expands Brand of Helping Others with New Partnership

Throughout his life, Tabay Atkins has shown the world that he’s never been too young to accomplish his goals and dreams.

By the time he was 11 years old, he had earned his fifth yoga certification. Since then, he’s added more certifications under his belt—now up to 11—in specialties such as Yoga4Cancer, Kids Yoga for Autism Spectrum, Teen and Tween Yoga and Restorative Yoga.

At the time that San Clemente Times first spoke with Atkins in January 2017, his entrepreneurial spirit and desire to help kids and adults through yoga instruction had given him aspirations of traveling the world and building a brand for himself.

Now, more than four years since the San Clemente kid first jumped onto the scene, making headlines nationwide as becoming one of the youngest—if not the youngest—yoga instructors in the world, he’s expanded his brand and reach considerably when it comes to teaching yoga. He’s even added vegan cooking classes to his repertoire.

With the money he’s made from those classes, which are now taught online, he’s donated most to directly support those suffering from cancer. He also donates his time by offering free yoga classes to cancer patients.

And just a couple of years ago, at 14, Atkins also graduated from high school with a 4.0 GPA. Now a 16-year-old, the young yogi is embarking on a new partnership that he hopes will take his mission of helping others to new heights.

“Now, I’m a Nike athlete,” Atkins tells SC Times this week, further explaining that he’ll get to teach yoga classes and poses through Nike Playlist videos on YouTube. “Now, I have a bigger platform to share my mission.”

In one of the latest videos posted to Nike’s YouTube channel last month, Atkins gives a crash course on how to do the three Warrior poses, which he filmed doing from the backyard of his family’s San Clemente home.

For Atkins, the new partnership—one of many that he already has—is another exciting opportunity to continue growing his brand and reaching more people interested in learning about yoga.

“The things he’ll be doing are promoting and doing special appearances for them and with them,” explains Atkins’ mother, Sahel Anvarinejad, a cancer survivor who on Tuesday, Sept. 14, celebrated her nine-year anniversary of being cancer-free.

It was witnessing Anvarinejad’s own experience learning yoga as she was recovering from her chemotherapy treatments that inspired Atkins, then 6 years old, to begin learning yoga himself.

“I was in the worst physical shape of my life, because chemo kicked my butt,” Anvarinejad recalls, adding that through yoga, though, she “went from not being able to walk on my own to completing a (200-hour vinyasa) training.”

“I was with her the whole time; I saw from when she first got into it and then got out of it, and there was a complete transformation,” Atkins says. “She was able to walk on her own again, and she was back to her healthy self, even healthier than before she had cancer.”

For a while, Anvarinejad, who has 18 specialized yoga certificates, ran her own local yoga studio, Care4Yoga, where both she and Atkins led classes for kids and adults whenever they were in town, as they split their time between San Clemente and Hawaii.

Anvarinejad would teach the classes for kids, while Atkins taught the adult classes.

“Care4Yoga was the first kids yoga studio in Orange County,” she notes. “There’s tons of yoga studios all over the place, but you don’t see them for kids. With so many amazing benefits of yoga, I’m thinking, why are there only adults doing it and not kids?”

Like most businesses over the past year, the local studio encountered problems during the pandemic. With such a small space, Anvarinejad says, she didn’t know when she could resume in-person classes safely.

“It didn’t make sense to keep (the studio) when I didn’t know when I could go back to teach any classes,” she says, noting that the new Nike partnership and other collaborations have also kept Atkins and Anvarinejad on the road a lot.

The pandemic did, however, present a new opportunity for Atkins to reach new audiences across the globe—virtual classes. Prior to the public health crisis, Atkins would get messages from people in other countries expressing their wish to take one of his many classes.

“Now that it’s online, I’ve been able to reach more people than I would before,” he says. “Before I would get messages saying, ‘I wish I can take classes, but I’m unable, became I’m in this part of the world.’ Now I’m able to teach everywhere.”

Through his website, tabayatkins.com, subscribers can watch Atkins’ videos and participate in his private or group yoga sessions, as well his vegan cooking classes.

Amid all the opportunities that Atkins has come across in the past few years, one new endeavor that he’s excited to take on is that of a gas station operator. Now living in San Clemente full-time, Atkins and Anvarinejad have taken over her father’s 76 fuel station in Capistrano Beach.

Anvarinejad explains that her father Michael Nejad, is ready to retire, and has handed off his station to her and Atkins. For Atkins, this has been a dream job in the making since before he discovered yoga was his dharma.

“Now I get to own it,” Atkins later adds.

Touching on their busy schedule, Anvarinejad expresses confidence that she and Atkins will be able to tackle the new opportunity.

“He didn’t think that we would do it, because our schedule is and has been very crazy,” Anvarinejad says, laughing next to Nejad. “But we’ve also shown that we’re able to handle everything, and for Tabay, this was more important to him than anything. I mean, everything else, we’ll be able to manage … this is very special, this is (my father’s) legacy.”