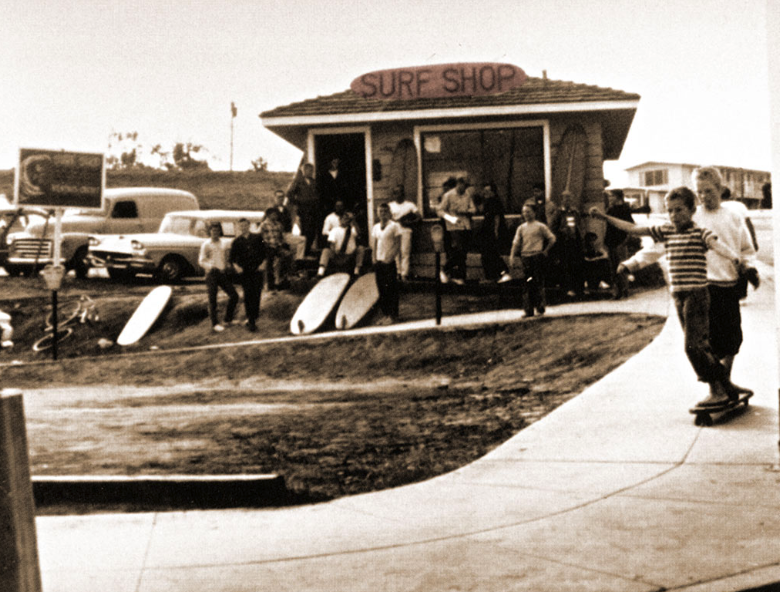 ‘Temples Of Stoke’ Coming To Town

Celebrating more than 20 of California’s most iconic surf shops, the new exhibit at the Surfing Heritage and Culture Center has something for everyone.

The story begins in San Francisco in 1952. Jack O’Neill and a small enclave of bohemians from the city have begun tempting fate in the turbulent waters of Kelly’s Cove at Ocean Beach. With conditions cold, foggy and foreboding, O’Neill solves two problems: he invents the “wetsuit” to keep him and his buddies warmer, and he opens the first surf shop.

In both instances, he forever changed surfing.

By ’54, the first surf shops had opened their doors down south. Nancy Katin and Hobie Alter opened shops in Surfside and Dana Point, respectively. Katin was making the most sought-after boardshorts ,and Hobie’s foam and fiberglass surfboards were a smash success thanks to an earnest friendship with pal Grubby Clark. Dive N’ Surf opened in Hermosa in ’56, and Jack’s Surfboards opened in Huntington Beach in ’57.

After the first few shops broke ground, a slew of others popped up on the West Coast in the early ’60s. California’s local surf shops immediately became the hubs for the budding West Coast surf culture.

“If surfing is a religion, the surf shops are the temples of stoke,” explained ’77 world champ Shaun Tomson in a recent piece he wrote.

These “temples of stoke” are where generations came to learn, laugh, talk story, buy their boards, wetsuits and wax. It was where young surfers were indoctrinated into the lifestyle and culture that turns naive beginners into real, lifelong surfers.

In recognition of the vital role that surf shops have played in the evolution of the sport and lifestyle of the beach, the Surfing Heritage and Culture Center’s new exhibit, “Temples of Stoke,” celebrates more than 20 of the most historic surf shops from up and down the West Coast. The shops have been invited to install their “shrines” in the exhibit space. Boards, photos, memorabilia and artifacts that tell the story of each shop will be on display to highlight the ethos and values of each uniquely different beach town along the West Coast.

“As surfers, our local shops are so much more than just a place to buy a surfboard or a pair of trunks” said SHACC’s curator, Barry Haun. “These are the places where we learn to be surfers.”

The Temples of Stoke opening night party will be held on Friday, August 9, 2019, from 6-10 p.m. at SHACC in San Clemente. Shop owners, employees and industry luminaries will all be on hand to celebrate and share their uniquely classic stories that helped make the sport and culture of surfing what it is today. It is open to the public, and tickets are available at SHACC.org.

The exhibit will be on display through October 6.