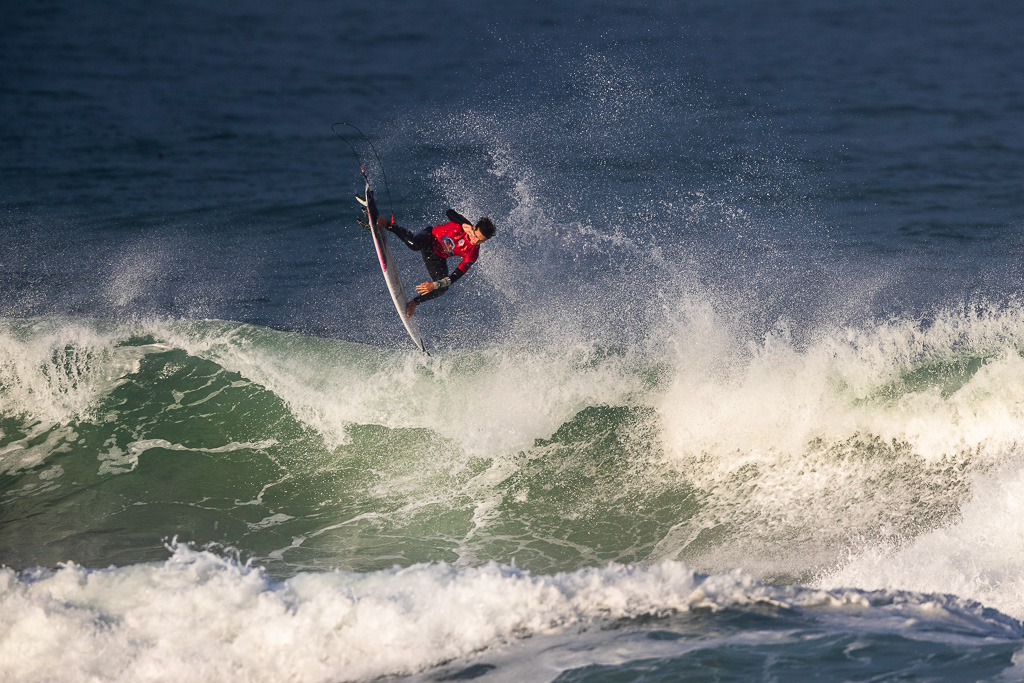 Everyone expected big things from 20-year-old Griffin Colapinto when he qualified for the WSL Championship Tour last year, but nobody could have expected he’d enjoy so much success so quickly. In his first contest as a full-time World Tour competitor, he finished third in pumping surf at Kirra on the Gold Coast of Australia. He followed that up with a second-place finish at the U.S. Open over the summer and is currently ranked 17th in the world. We caught up with him between travels to see how things are going this year and what it means to carry the torch for San Clemente.

SC Times (SCT): Is it going as well as expected?

Griffin Colapinto (GC): “I didn’t really come into this year with any expectations, so I think that’s always a good mindset to have. It’s kind of going how I thought it would go: get a couple good results and then have a few events that were a little bit harder to figure out. I just have to learn about them. I’m not expecting to be going for a world title or anything this year. All’s good.”

SCT: What’s come at you this year that you didn’t expect?

GC: “I thought I was going to do better in Tahiti. I thought it would have been a good spot for me just because… I like to surf big waves, and if it was big I thought I would do well. But it was small and pretty grindy. It’s really hard to figure out the lineup when it’s that size. Everyone says that it’s the hardest size to surf because it’s so unpredictable. I think I need to figure that out a lot. All the other spots, I think (with) a few more surfs, and I’d be able to figure it out.”

SCT: What about pressure? Did you feel any pressure to start the year?

GC: No, I didn’t really feel much pressure. I guess the most pressure I’ve felt was before Bali, when I made the quarterfinals. At home I was kind of tripping, but then I kind of figured some things out mentally, went over there and had a bunch of fun, made the quarters and that just relieved a lot of pressure. It put me in a good position in the rankings. From there it was off to J-Bay (South Africa). I got ninth there, and after that I really felt free. I’m backed up on the QS really well, so now it’s just (to) keep on bettering things.”

SCT: And when you went down to J-Bay, your dad came with you. How special was that to have him there?

GC: “It was awesome. He’s always looking at the bright side, so he’s always good to travel with. If anything goes wrong, it’s nice to have him there as backup, to help out. He’s always psyched to help. He’s put so much work into me over the years just to get me to the point where I can do the professional surfing thing. He was down at the beach filming for so many hours, a countless amount of hours. So he probably feels pretty good about it, too, like an accomplishment for him. It’s pretty cool.”

SCT: And your brother, Crosby, he’s ripping, too.

GC: “Yeah, he won that Cabo event, then he won the U.S. Championships, so he’s on fire. He’s got more of that Joel Parkinson- or Jordy Smith-type build, where I’ve got more of a Julian Wilson build. It’s nice that we have different styles so that people can look differently at us a little bit. It’s not like we’re just one person.”

SCT: What about your surf crew in San Clemente? When you’re in town, who are you hanging with?

GC: “I’m with my friend and (filmmaker) Jacob Vanderwork pretty much every day. He’s either filming us or he’s surfing with us, depending on how the waves are. I surf a lot with Crosby and his friends: Kade Matson, Cole Houshmand and Jett Schilling, those kids. They’re all super cool and fun to hang out with, so I’ll surf with them if they’re around. And then Brother (Kolohe Andino), of course, as well as Ian Crane. That’s pretty much it right there.”

SCT: How about the younger kids, any of them catch your eye?

GC: “It’s pretty crazy. These kids coming up are, seriously, they’re the best kids in the world, and they all live in San Clemente. I feel like I haven’t seen many other kids from other countries doing what they’re doing. It’s crazy watching them all surf Lowers together and push each other so much. There are actually these two younger kids coming up, Cannon Carr and Makai Bray. They’re going to be gnarly. It’s heavy.”