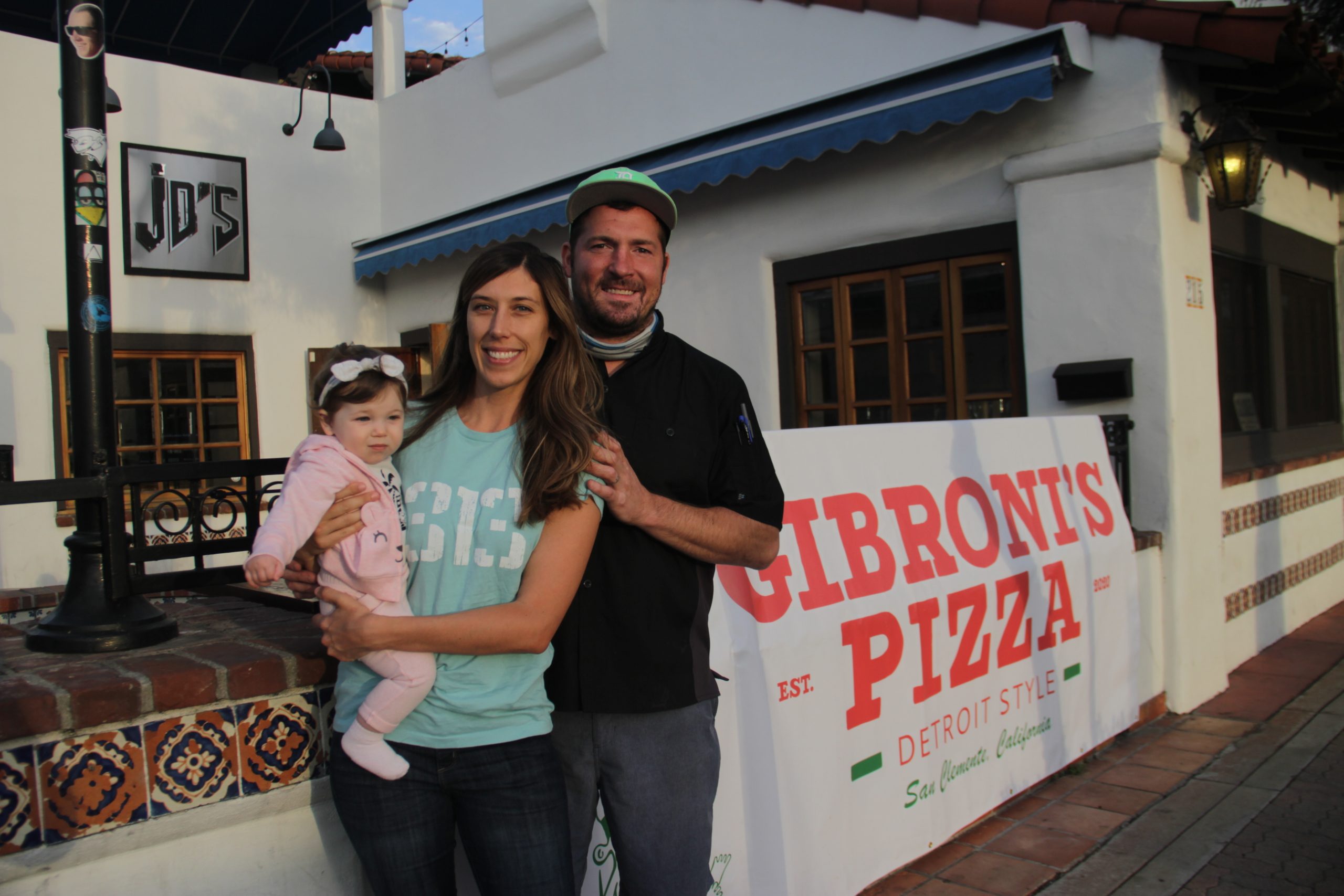 Around the start of the pandemic, Tony Gioutsos got furloughed from his job at Artifex Brewing Company. It was a precarious time for him and his wife, Lindsey, who had recently given birth to their daughter Leni, now 9 months old.

Though the ongoing public health crisis has put a strain on countless families throughout the nation, forcing millions like Tony out of work, for the Gioutsos family, it was an opportunity to initiate their own contingency plan.

What was their Plan B? When the couple first moved to San Clemente five years ago, following a stint in Austin, Texas, where they ran a Tex-Mex-Italian fusion food truck, Tony wanted to open a pizza joint.

But not just any pizza joint. He wanted to bring his and Lindsey’s hometown of Detroit to Southern California, recognizing an absence of Detroit-style pizza nearby, namely a Jet’s Pizza franchise, which they grew up with in Michigan.

Based on their experience of operating the food truck, Tony said, they “knew how much work it was. So, Lindsey was a little bit hesitant in me starting this.”

That was until he got furloughed, however. Not long afterward, Tony began making Detroit-style pies and selling them out of his own home one day a week.

“When I got furloughed for a couple of months from Artifex, (Lindsey) was like, ‘All right, this is going pretty good; do you want to do it?’ and I’m like, ‘Let’s go.’ So here we are,” Tony said.

His customer base, at first, consisted of Artifex regulars, but word of mouth spread the news, while Lindsey also handled the marketing on Instagram.

“So, we were selling it out of my house just like a pop-up in my garage, and I set up tables outside,” he said, adding that customers could also “come up to the gate, and you can take it and go, because it was during the middle of the pandemic, when it was bad.”

Eventually, Tony, along with his neighbor, Chef Jacob Anderson (who previously worked at Brick Restaurant in San Clemente), expanded the operation to two days a week. The two, in September, attended a formal training seminar in Detroit with world champion pizza maker Shawn Randazzo.

“I kind of knew we had a good product already, because we were selling out,” Tony explained, later noting that he wanted to take Randazzo’s course for his own affirmation. “I just needed the confirmation that we were going in the right path.”

After they got back, Tony said, he got a call from longtime friend Justin Shea, owner of JD’s Kitchen and Bar in Downtown San Clemente.

“He was like, ‘Hey, dude, I’ve got a proposal for you.’ He said, ‘I don’t want to run my kitchen anymore; it’s kind of a wash (financially) with food and everything, just the way everything was going. If you want to sublease my kitchen from me, I’ll give you the first month or so to get started and see how it goes from there,’ ” Tony said.

Taking Shea up on his offer, Gioutsos and Anderson late last month took over the kitchen at JD’s, where Gibroni’s Pizza is now operating three evenings a week—Wednesdays, Thursdays and Saturdays. The operation will soon expand after Thanksgiving, when Gibroni’s will open for Friday evenings and Sunday afternoons as well, according to Tony.

The name, Gibroni’s Pizza, Tony said, stems from a nickname he was given by a bartender back in Charlotte, North Carolina, where he and Lindsey also lived for a for a few years before relocating to Austin.

So how does Detroit-style pizza compare to the more widely known pizza styles of New York, where their pies are thin, and Chicago, where it boasts the hearty and thick deep-dish varieties? Tony explained that it’s somewhere in the middle.

“The biggest difference is it being square, like a rectangle,” Tony said. “And then it’s a fluffy focaccia—that’s how we like to describe the dough—and ingredients then go on the bottom, and then cheese and then sauce on top.”

As if that wasn’t mouthwatering enough, Tony further noted that they spread the cheese all the way to the crust, where it caramelizes, giving it that “butter crust.”

“The crust is the name of the game,” he said. “If you’ve got a good crust, it’s a good start, so it’s got the first crispiness on the bottom and then the edges, and then a fluffy, airy middle. That’s like true Detroit-style pizza.”

And then, of course, there’s the ranch dressing on the side, a staple of Midwest eateries, Tony said. Gibroni’s makes its own homestyle ranch, which they’re calling “Cranch.”

“I think it’s just like a big Midwest thing. People love their ranch in the Midwest,” he said.

For those looking to grab a pie, though, Tony warned, patience is key, as the pizzas take a bit longer to bake, compared to a traditional pizza.

“I think people expect us to be like a normal pizza place, where it takes like 5 to 10 minutes to get your pizza,” Tony said. “It’s going to take 25 to 30 minutes, because it has to be perfect and it has to be done correctly.”

The pizzas themselves, he said, are prepared differently, particularly when it comes to the dough.

“The thing with Detroit-style pizza is you really have to—you can’t just make dough—you really have to be really careful with it. You have to press it a certain way; you have to make sure it’s fluffy,” he said. “Everything needs to be meticulously looked after.”

Gibroni’s, Tony said, will maintain a small menu consisting of about six to eight pies, Bouzouki bread and a salad. Eventually, he said, they’ll offer chicken wings and a rotating pizza of the week.

Orders can be placed ahead of time on the Gibroni’s website, with slots available as early as 5 p.m. and as late as 9 p.m. Customers can also place orders in person at JD’s.

The pies are “hand-crafted, especially for you … and we put a lot of love in everything we do, in the pizzas we make,” Tony said. “And I make sure it looks exactly how I want it to look and, yeah, I take a lot of pride in that.”