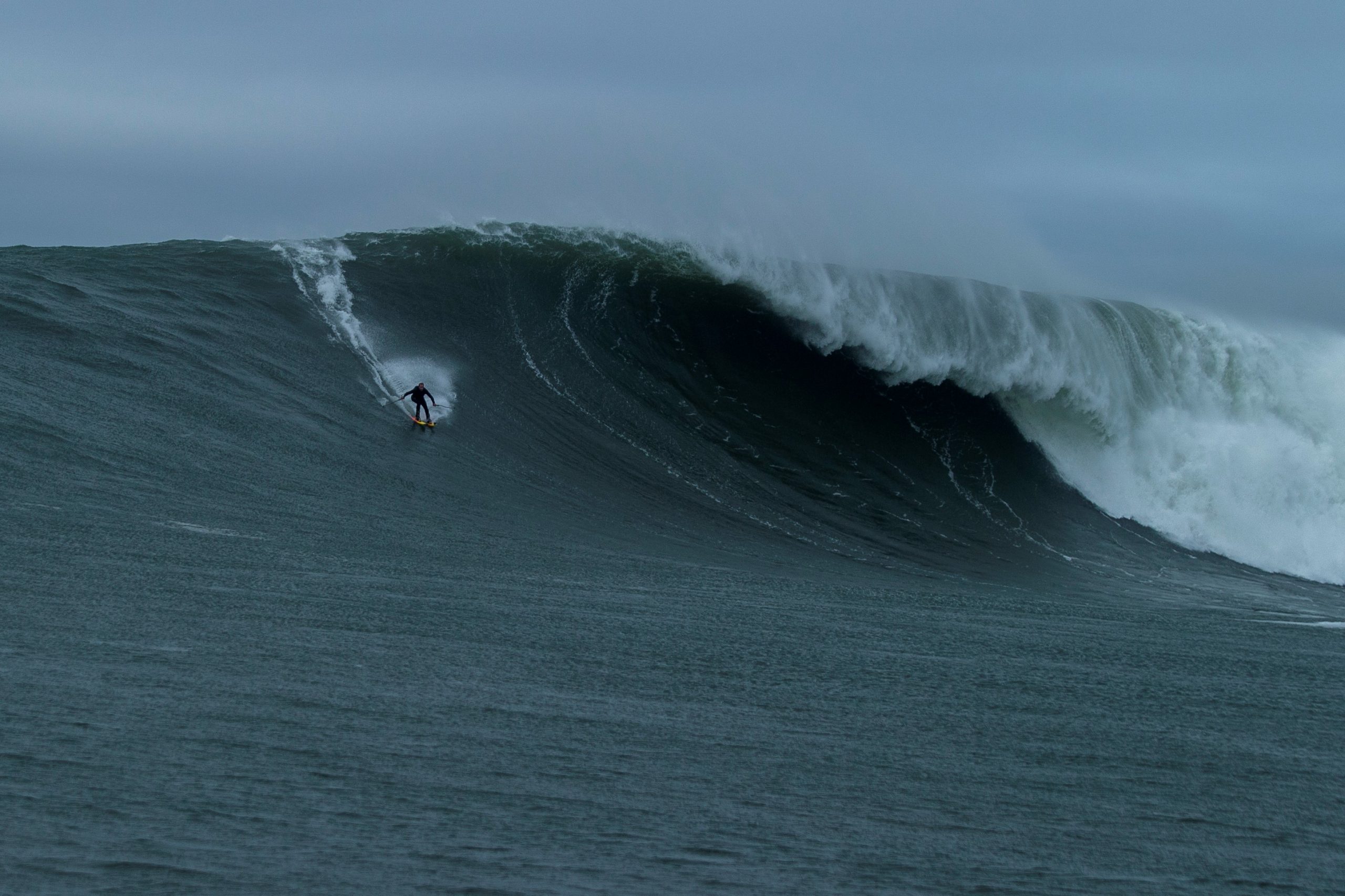 There isn’t a lot that scares Chuck Patterson. He’s kind of like surfing’s version of Chuck Norris. Or maybe Chuck Yeager. Either way, in his time on this Earth, he has skied the tallest mountains, ridden the biggest waves, and categorizes it all simply as “fun.”

“When I’m home, I try and get in for at least one saltwater dip a day,” says Patterson, who took a quick break from chasing swells last weekend to talk to San Clemente Times. “We’ve had such an incredible run of surf lately, I mean, what else are you going to do?”

A professional action sports athlete and stuntman by trade, at 6’2”, 220 pounds, Patterson is built like a linebacker with the coordination and speed of a Himalayan snow leopard. Surfing, skiing, snowboarding, kite surfing, stand-up paddling—he does it all. He even lists “speed flying” on his resume. Google it; it’ll blow your mind.

Patterson first busted out his skis at the big-wave break Jaws on the island of Maui a handful of years ago. Initially, he tested a pair of jumping water skis, which are long, flat and wide.

“They have incredible glide,” he said at the time.

The juxtaposition of a huge, blue Hawaiian wall of water and a guy literally downhill skiing the face was enough to garner Patterson international media attention. Then, as viral hits go, people kind of forgot about Patterson and his skis.

“Lately, I’ve been working on some other projects and haven’t really thought about them; then, when we went up to Mavericks for the swell, I threw them in just to have them as an option,” Patterson said. “They’re pretty much regular water skis with a few customizations. The core is wood, so we can anchor the bindings down.”

On Jan. 10, a massive northwest swell hit the Northern California big-wave break of Mavericks in Half Moon Bay. Those who were there described the day as one of the best in more than a decade, as wave heights pushed well over 30 feet and the conditions stayed clean.

“The paddle guys were definitely pushing the limits out there, and guys like Pete Mel and Twiggy (Grant Baker) took advantage of the moment,” Patterson said. “Eventually, the tow guys had a chance to get after it, and I just figured, it was so big and clean, why not break out the skis?”

“They go really well. It’s not just a novelty; they work,” he added.

But Patterson is one of those guys who’s always looking forward. Yesterday’s ride is done and recorded in the books, and as this winter flurry of waves has gone, there are more pulses coming.

“We’ve got a few spots down south we’re looking at for Monday and Tuesday; we’ll see where we end up,” Patterson said. “Todos (Santos) is an option, we could end up back at Mavericks, and there are other potentials as well, so we’ll see. It looks like this little run of waves is going to be drying up soon, so I just want to make sure we take advantage of it.”

By the time you read this, the latest west swell will have come and gone. North or south, Patterson will have undoubtedly found himself a little honey hole. He may even have busted out the skis on a bluebird day south of the border.

Bet you didn’t know there was skiing down in Baja. We’ll have to do a follow-up to get the next chapter of the story.