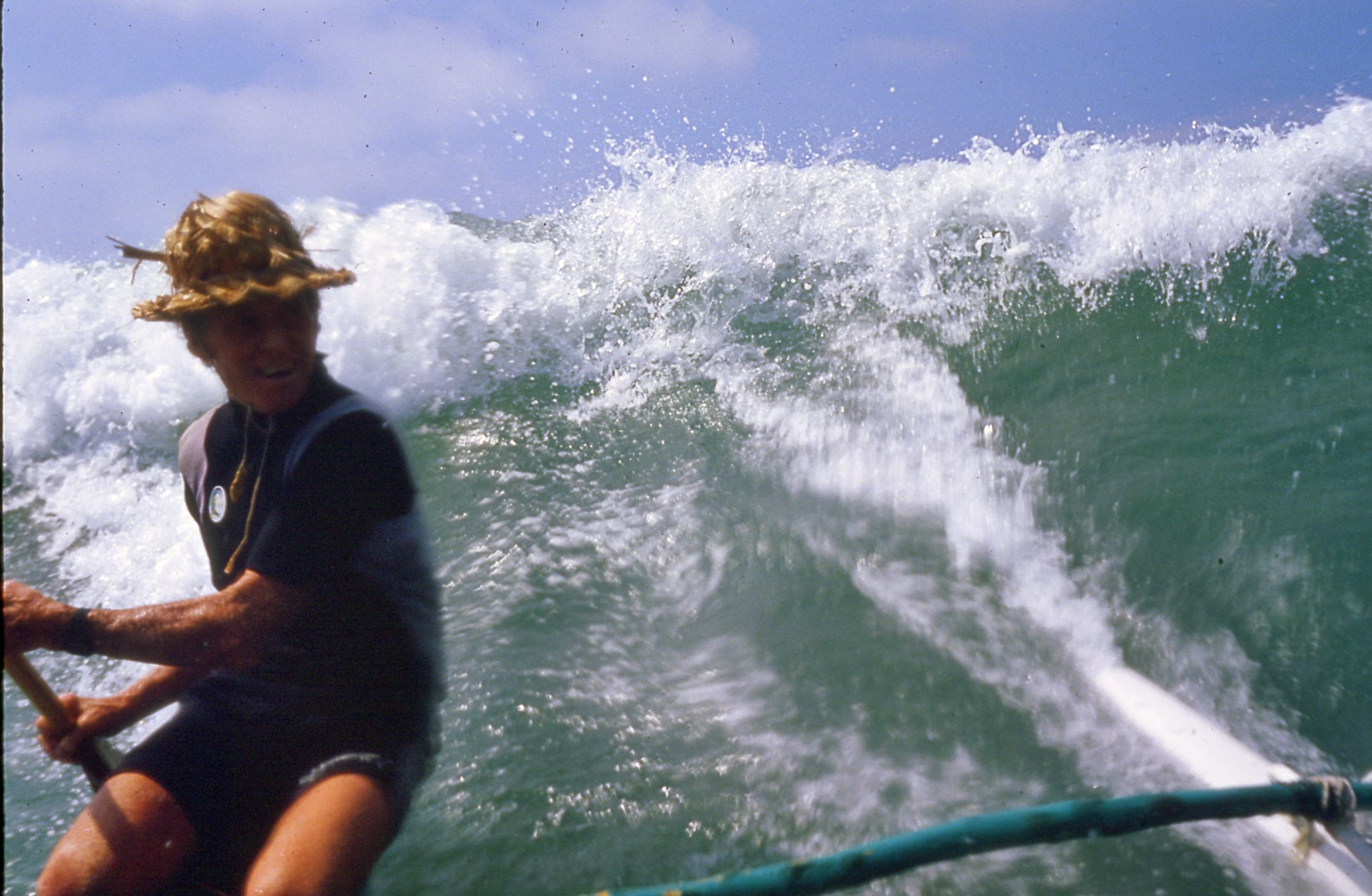 From surfing San Onofre for the first time to bringing outrigger canoe racing to California, nobody did it quite like Lorrin “Whitey” Harrison

Hosted by the Dana Outrigger Canoe Club, this bit of living, breathing, paddling history is a 20-mile, 9-person outrigger canoe race that kicks off just outside the Dana Point Harbor before heading north to Laguna Beach. The boats turn around at Main Beach in Laguna before heading for the finish line at Doheny Beach.

And while the race was subject to a bit of a fog delay on Saturday morning, Aug. 13, once the paddlers hit the water, it was on. With the men’s, women’s and coed divisions loaded with talent from all over the paddling world, and Harrison’s extended family on hand to soak in the celebration, it was a beautiful day on the water.

Named after Lorrin “Whitey” Harrison, the race is dedicated to the man’s memory and legacy. Considered one of the earliest pioneers of California surf and beach culture, Harrison’s impact up and down the coast of California cannot be understated.

“(Pete) Peterson and (Whitey) Harrison were the two best surfers in California in the 1930s,” wrote one of surfing’s earliest photographers, Don James.  “Each of them had won the prestigious Pacific Coast Championship. Both were incredible watermen who excelled at diving, canoe surfing, sailing, swimming, body surfing, tandem riding, fishing, and boat and board building, in addition to conventional stand-up surfing.”

Born in Garden Grove in 1913, Harrison first started surfing in 1925. The boards of choice during this era were largely self-made, 130-pound redwood planks. Undaunted, Harrison cut his teeth on the waves at Corona del Mar. A decade later, he became the first person to surf San Onofre.

In 1932, Harrison decided it was time to make a pilgrimage to Hawaii, so he stowed away on a cruise ship bound for Waikiki, though he was caught before he could set foot on Hawaiian soil and sent back to the mainland.

Remarkably persistent, less than 24 hours later, he once again stowed away on a boat. And once again, he was caught. But this time, he was allowed to stay in the Islands. The experience was transformative.

It was in Hawaii that Harrison was exposed to Hawaiian culture and the aloha spirit. Highly influenced by luminaries such as Duke Kahanamoku, Harrison returned to California and shared what he’d learned. Harrison came back to Hawaii in the late 1930s, where he was among the first to surf the now-famous North Shore.

“Being on the ocean is life itself,” Harrison famously once said.

In keeping with his passion for all things Polynesian, Harrison introduced outrigger canoe racing to California in 1936. More than 20 years later, in 1959, the first official club competition was held featuring a team from Oahu racing against Harrison’s crew of Golden State upstarts. The race went from Catalina to Newport.

“The Hawaiians made the 30-mile crossing in five hours,” Harrison later said. “We did it in 5 hours, 11 minutes. That was the beginning of outrigger canoe racing on the mainland.”

The annual Whitey Harrison Canoe Classic started in Newport Beach, before being included in the Dana Point Harbor opening ceremonies in 1971.

With deep roots in the Dana Point area, in 1946, Harrison met and married Cecelia Yorba, a descendant from a California Spanish land grant family. They lived in her 18th-century adobe house in San Juan Capistrano, less than a mile inland from Doheny. The family continues to own and live in the home to this day.

Harrison died of a heart attack in 1993 while driving home with his wife after a morning swim in Hawaii.

“He was part of the lore and legend of surfing,” Steve Pezman, co-founder of The Surfer’s Journal, explained in Harrison’s 1993 Los Angeles Times obituary. “And Lorrin was a major player in the culture in those naive days when California wasn’t carpeted with subdivisions.”