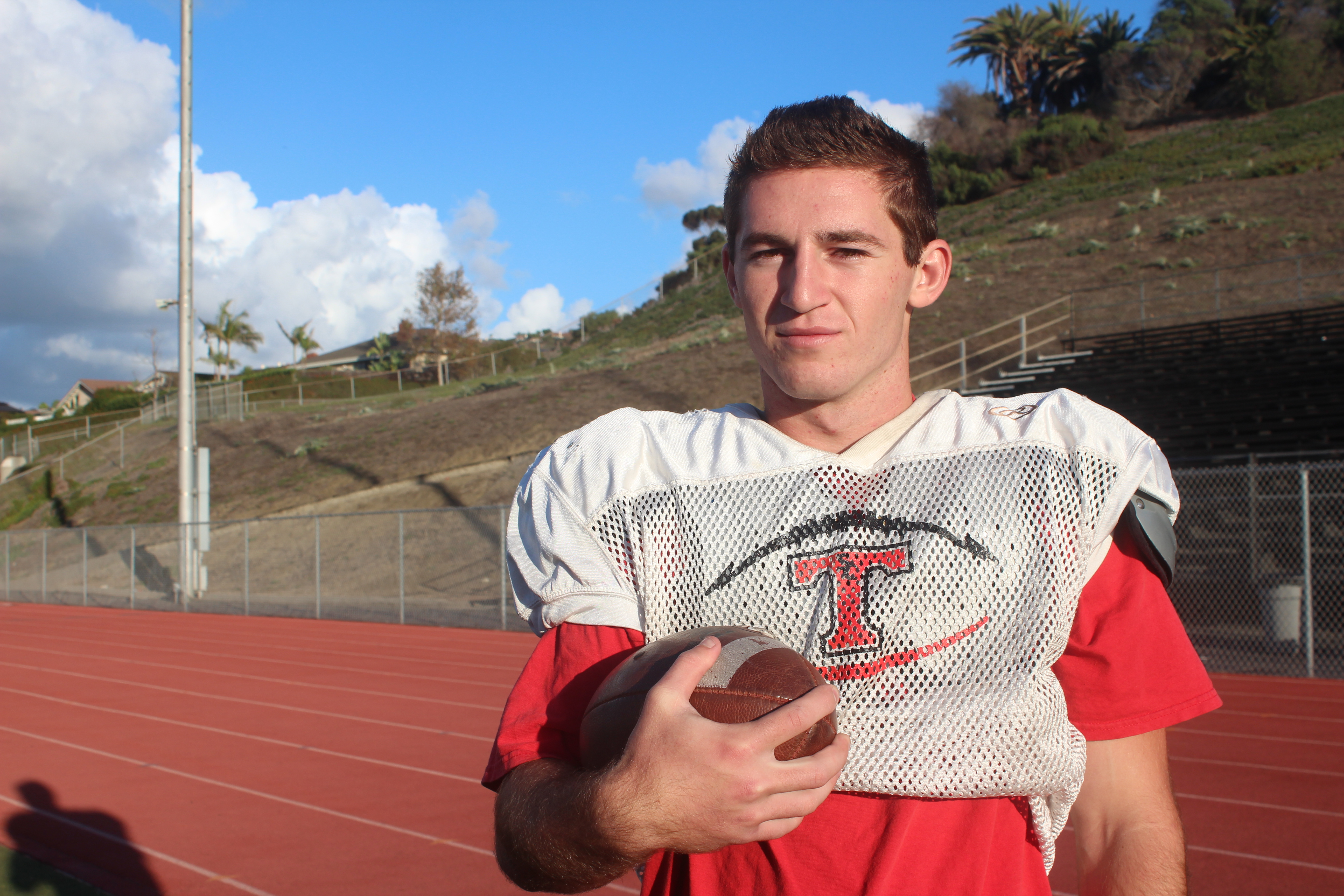 Over the past three seasons there has been one constant in the backfield of the San Clemente High School football team’s offense, waiting to do his job and gain the tough yards.

Senior running back Vlad Dzhabiyev has built an impressive resume as the Tritons go-to back, playing with a physical intensity that has tormented opposing defenses.

In the Tritons most recent game, against Trabuco Hills on Oct. 30, Dzhabiyev only touched the ball nine times. Despite the limited amount of carries, Dzhabiyev led all rushers with 152 yards and scored one touchdown. His touchdown run was impressive, a hard-nosed dash to the right that went for 28 yards, but it was a run in the third quarter that left a lasting impression.

The Tritons were looking to pad their lead and extend a drive around midfield. A routine handoff to Dzhabiyev suddenly turned into a highlight, as the senior exploded through the line and mowed down a Mustangs linebacker. Several other defenders tried to bring him down and when it looked like the carry would turn into a modest gain of 10 yards, Dzhabiyev, through sheer strength, extended the play another seven with defenders draped on his back.

“He’s probably the last guy to say a whole lot but his physical presence says a lot,” Tritons head coach Jaime Ortiz said. “In that Trabuco game where he ran over that kid—that’s Vlad.”

Dzhabiyev was thrown into the fire early in his career, having never played running back before his sophomore year. He grew up playing safety and linebacker in middle school while living in Oceanside before earning the starting running back job with the Tritons. That 2013 season started with a lot of promise, as former quarterback Sam Darnold prepared to lead the team as a junior. Darnold broke his foot in just the third game of the year, which put Dzhabiyev in the spotlight as the team’s main offensive weapon.

His numbers as a sophomore were respectable. He led the team in carries (119) and rushed for 500 yards and three touchdowns.

When the Tritons reloaded for 2014, Dzhabiyev showed how effective a runner he can be. As a junior on one of the most prolific San Clemente offenses in school history, Dzhabiyev ran for 1,149 yards, averaging seven yards per carry, and scored 13 touchdowns. He also caught 28 passes for 232 yards and six scores and was second only to Darnold, who is now at USC, in total yards. Dzhabiyev was named the Sea View League’s offensive player of the year.

Dzhabiyev’s role as a senior has expanded. Not only is he the team’s primary running back, he is also getting some time playing outside linebacker on defense. On Oct. 30, the same night he led all rushers on the field, he recorded a sack.

The Tritons are loaded with playmakers on offense this season, and junior receiver/running back Brandon Reaves and breakout sophomore running back Austin Whitsett have proven they can move the chains. Junior quarterback Jack Sears has emerged as a legitimate dual threat quarterback, rushing for 615 yards and eight touchdowns while throwing for 22 more. In all, 10 different Tritons have scored rushing and receiving touchdowns this year, showing how well-oiled of a machine the Triton offense can be.

With so many dynamic players on the field, the volume of his carries is down, but Dzhabiyev’s efficiency is up. He is averaging 9.9 yards per carry and leads the team with 675 rushing yards. He has also been taken out of several games when the Tritons are up big on the scoreboard to limit the risk of injury.

The backfield may be more crowded, but Dzhabiyev doesn’t mind one bit.

“I’m all for it. As many people that can make plays, jump right in. It’s just to benefit the team, that’s what it’s all about,” Dzhabiyev said.