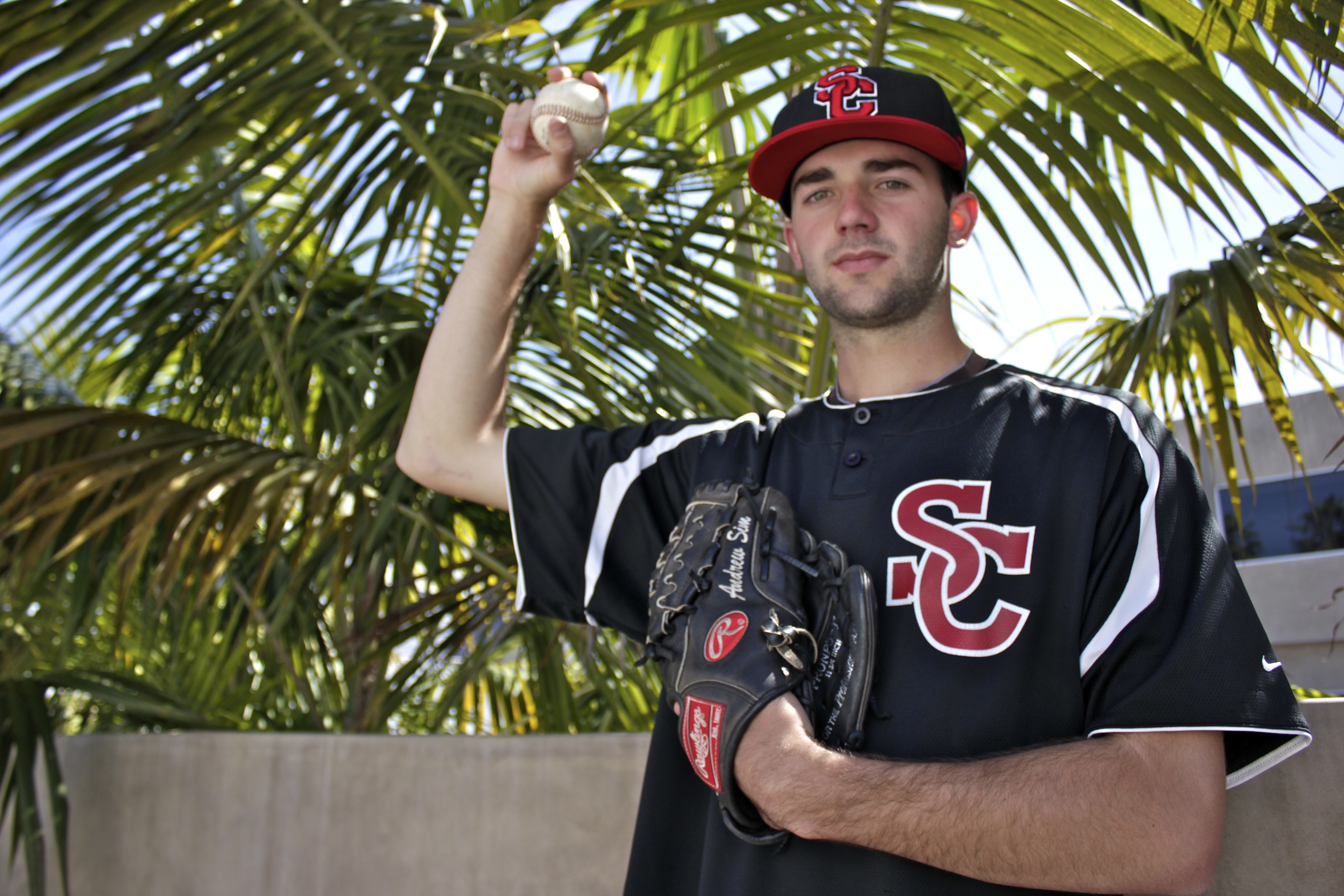 The Road to Recovery

We’ve all heard the expression beginning, “When life throws you a curve ball …,” and it’s usually followed by advice on how to be flexible and deal with life when the bottom drops out, much like a batter facing the plunging pitch. For 17-year-old pitcher Andrew Sim, it was literally a curveball that sent him on a path in life he never thought he’d go down, but it’s one he is willing to see to the end.

On March 26, 2013, the San Clemente High School baseball team was playing host to rival Dana Hills. Sim was on the mound and had just cruised through the first five innings, his team staking him to a 2-0 lead. As he came back into the dugout, head coach Dave Gellatly asked the junior if he was good to go another inning. Of course he was, he said—he had a two-hit shutout going.

After getting two outs in the sixth, Sim threw a curveball to the third batter and felt a strong, painful pop in his throwing elbow. He fell to the ground in a heap. Determined to stay in the game and finish the inning, Sim gathered himself and lobbed two pitches that he says could not have gone faster than 60 mph. He somehow induced a slow roller to third base, got the out and picked up the win.

After the game, numbness soon crept into his hands and arm. He tried to throw the following week but everything felt off, like he had no power behind his throws, prompting him to get an MRI. Sim soon learned that his ulnar collateral ligament, or UCL, had failed and broke down over time. He would need a surgical graft to reconstruct his elbow if he was to ever throw a baseball again. The procedure is better known as Tommy John surgery.

Before the procedure was invented by former Los Angeles Dodgers orthopedic surgeon Dr. Frank Jobe, news of a torn UCL was essentially a career death sentence for professionals. But since its development in 1974, Tommy John surgery has extended countless Major League, minor league and college pitching careers.

The surgery was created when former Dodgers pitcher Tommy John blew his arm out during the 1974 season. Wanting to extend his career, John approached Jobe, who successfully harvested and reattached a redundant tendon – the Palmaris tendon in the forearm – into the spot where John’s UCL used to be. John returned from surgery in 1976 to pitch for 14 more seasons, winning 164 of his 288 total career victories, putting the procedure on the map. Other teams quickly adopted the procedure and it is widely used by professional organizations, including lacrosse, football and other sports teams, to this day.

Tommy John surgery isn’t the only option for pitchers who suffer the injury. Sim was told of platelet-rich plasma therapy, or PRP, which his surgeon explained did not have the same guarantee of helping a player return to full strength. The Sim family opted for what they believed to be the safest, most reliable route for getting Andrew back on the mound.

Doctors and therapists hinted it might be tough for someone of Sim’s age to take on such a recovery process. Most players who have the procedure are professionals or college players, trying to make a living—not teenagers. His doctors expressed concern he wouldn’t have the same drive and work ethic to get back.

“Once I realized I had torn something like that, I knew I didn’t want to just give it up. I’m not done with this game yet,” Sim said. “I’m hoping I’ll be able to play all four years at college. I didn’t think I could give it up, especially working as hard as I did before (the injury). I just didn’t want to give it up quite yet.”

Following a successful procedure, Sim is now 10 months into his rehabilitation process and is back to throwing bullpen sessions at Tritons practices. But getting there has been a long, slow and frustrating process.

In the first month, Sim’s workouts consisted of bicep-curling thin air. Any sort of stress on his elbow would have caused a setback. He tediously pressed volleyballs into a wall to help strengthen his back and he wasn’t allowed to run because the tendon graft in his elbow came from his hamstring, which was also on the mend.

As the months went by, Sim’s workouts increased by baby steps. When he was finally able to do 15 pushups, it was a cause for celebration.

Five months after the surgery, he was given the go ahead to throw a ball and the motion felt foreign. The kid, who came to San Clemente by way of Naperville, Ill. in the third grade, had to essentially start over and build trust in his mechanics again.

Sim is back to lifting weights and is throwing bullpens once a week at about 60 percent of his maximum effort from a shorter distance. While his workload is beginning to look a little more regular, his warm-up routine is not what it used to be.

Sim used to stretch a bit, loosen his arm and start throwing before an outing. Now his warm-up takes around 45 minutes, 30 of which are reserved for specific, resistance band stretching and core muscle exercises. He knows it’s something he will have to do for the rest of his baseball career.

Aside from the physical toll it took, Sim’s road to recovery has been a test of mental toughness.

Sim was called up from junior varsity in 2013 and immediately made an impact. After earning his spot in the rotation, he went 2-0 in six appearances and had a streak of 18 consecutive innings pitched without allowing an earned run. Then came that fateful curveball in the sixth inning. To have that breakout season come to a sudden halt and cast doubts about the following year, during which seniors show their stuff to potential collegiate suitors, was tough on him.

After accepting the fact he will likely miss most, if not all, of his senior season, Sim emailed a few college coaches in the area, telling them about his situation and his desire to compete for a spot on their teams. But the risk of taking on an already damaged arm out of high school was not exactly appealing, at least to some. Sim is optimistic about making a full recovery and trying out for the Saddleback College baseball team next year.

Gellatly, his coach, believes Sim can make it at the next level in some capacity. But he has no precedence to base his hunch off of. Gellatly has been coaching baseball for 20 years and has never had a player undergo elbow or shoulder surgery, making Sim the lone exception.

“It’s very rare … but you can never have enough pitching,” Gellatly said. “He may come back looking like a million bucks or he may come back and realize he needs to take time to reload his mechanics again. But he is the kind of guy to put in that time. As long as he does that, he can play four years of college baseball.”

One inning, that’s all Sim is hoping for in his senior season. He has suited up, showed up and stood alongside his teammates for every practice and game. He’s made 73 trips to the physical therapist and logged more than 176 hours in therapy since the surgery. He has learned not to set the bar too high or get too greedy. Instead, he has met each and every goal in small increments because anything more could set him back.

After all, he’s got the future to look forward to.

“I’m a lot more thankful being able to play the game now. I haven’t touched the field since March 26. It’s been almost a year and it sucks. I just want to get out there,” Sim said. “It’s such a fun game. I don’t think as many people realize that … I’d just kill to get out there.”