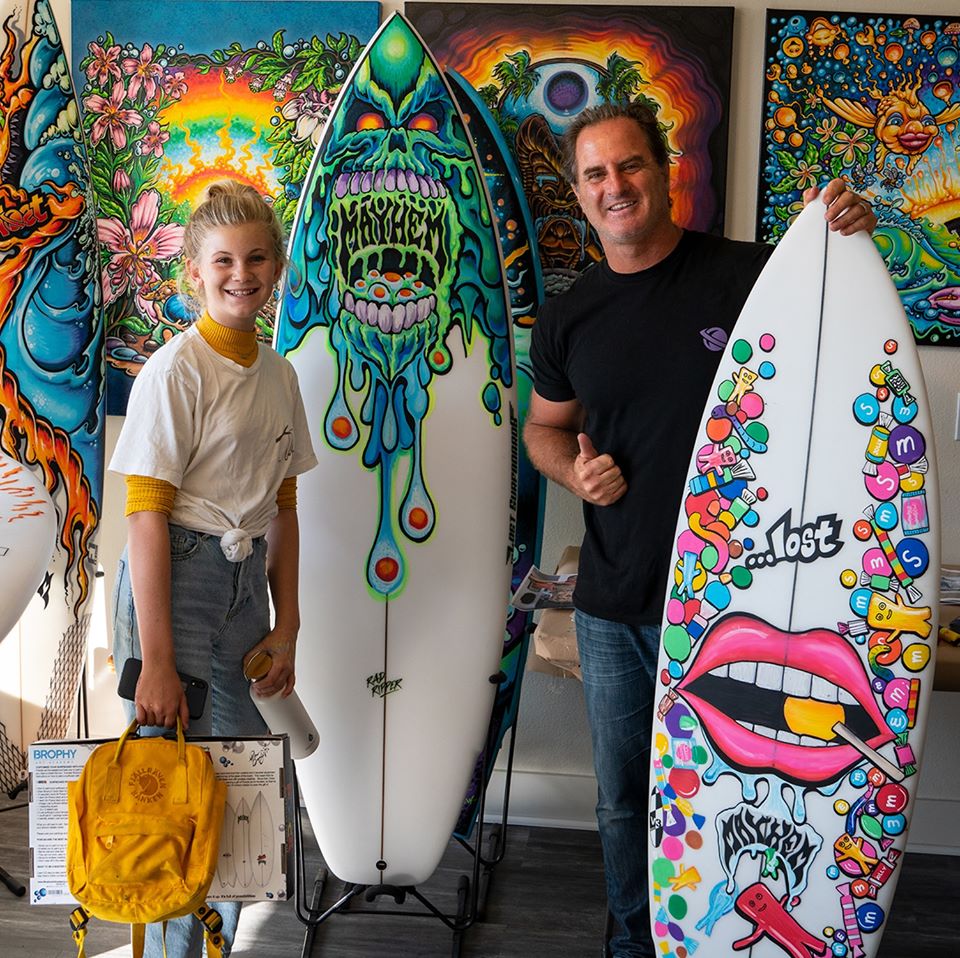 The Stoke of a Pen

How artist Drew Brophy brought his own aesthetic to Lost Surfboards

When I first moved to San Clemente 20 years ago, my would-be wife and I rented a small apartment on Calle Victoria. Besides becoming fast friends with Rami Dogg at Victoria Market, my next-door neighbors turned out to be artist Drew Brophy, his wife, Maria, and their young son, Dylan.

Brophy’s reputation preceded our meeting. It was his artwork that had helped Lost Surfboards rise from backyard-board label to a punk and disorderly industry leader. When I was in college, we had those early VHS movies featuring Chris Ward, Shea and Cory Lopez, Randall and crew on loop.

Like me, Brophy didn’t come from San Clemente. The gritty Orange County surf hub found him. He came up as a surf-stoked kid in Myrtle Beach, South Carolina, in the ’80s. A naturally talented artist with a penchant for powerful surf, Brophy bought a one-way ticket to Hawaii and never returned, following a stint painting boards in Myrtle Beach in the early ’90s.

“I had to get out,” Brophy told me recently, when we sat down to talk about his career. “It was a dead end for me. I went to the North Shore to paint boards and surf Pipeline. That was the dream, but like anything, I guess, that wasn’t the reality. I got some work painting boards, mostly airbrushing, because nobody was really using the Posca paint pens. I got to a point where I was painting the top guys’ boards. Some big-name guy would come in, explain what he wanted, and I’d paint his board, but getting paid was a different story.”

Then Brophy hit the bottom at Pipe. Smashing his face and body on the reef, he was a broken young man. Without any money or direction, in addition to mounting medical bills, Brophy pursued a scenery change. He linked up with an old friend from Myrtle Beach who’d moved to San Clemente.

“I rented his garage, and that’s where I lived when I first moved to California. I met Matt (Biolos), and we hit it off right away,” Brophy said. “This would have been around ’95 or ’96.”

Biolos and Mike Reola were on the cusp of launching Lost Surfboards. Brophy quickly delivered the irreverent aesthetic touch to take them over the top. His skills with Japanese Posca paint pens—a medium that had been largely ignored by surfboard artists—was the differentiating factor.

“Airbrushing is more technical. I knew that these pens would allow for a lot more freedom and creativity. I knew there was opportunity there,” he explained. “This was still the time when a lot of guys were on all white surfboards and black wetsuits. We started putting color and fun into the art. We’d do anything we wanted on a board. There weren’t any rules.”

“We were the misfits,” Brophy added. “We were the underbelly, the guys that were outcasts, and we accepted a lot of different people into what we were doing. We were trying to figure out how to make all this work, so we could still have fun and surf every day.”

As business started to build at Lost Surfboards, Brophy and Biolos hit the road together. Both dedicated to their craft, they jumped on the trade show circuit and started grinding.

“There were other artists contributing at the time, but I’d go with Matt to these shows, because I could paint 100 or 200 boards over the course of a weekend,” said Brophy. “Things took off. Within a year, I started making good money. We all did. I’d never had any money, so I didn’t really know how to spend it once I had it. I bought a car and a house with the money I made painting surfboards.”

The good times kept rolling for the next few years. The company embraced its role as the home for misfits, and subsequently, surfers the world over gobbled up what they were selling.

“We were going everywhere, shaping and painting and surfing. We had a lot of fun during that time,” Brophy said. “It was like the dream had come true for us.”

Eventually setting out on his own, he launched Drew Brophy Designs in the ensuing years, and with the support of his wife, Maria, they’ve built an extremely successful business selling, licensing and commissioning his work.

And today? They still live happily together in that old Ole Hanson where I first met them, and I’m still as stoked as ever to bump into them when I see them around town.